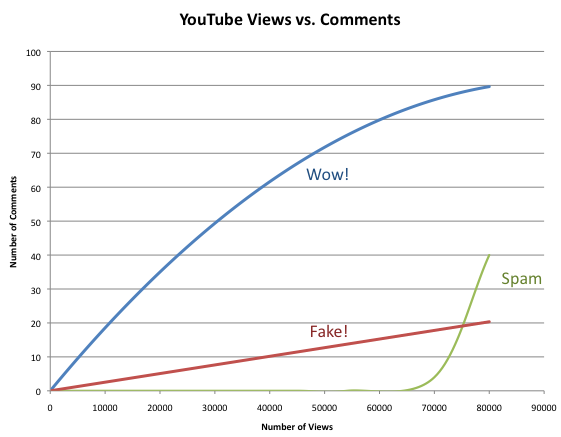 So my YouTube video has gone viral and now I get to find out more than I ever wanted to know about induhviduals who comment on YouTube videos. The first couple hundred views got no remark at all. I knew I was in for something serious when I got my first "Fake and gay!" comment on Wednesday morning. I deleted that one because I thought "gay" was offensive. About 3pm on Wednesday Phil Plait embedded my video on his blog, Bad Astronomy. That was the beginning of the comment arguments over what actually was going on up there in the sky to cause these effects. And the ramp up on the claims that it was fake.

I think the fake argument is funny. Did they not hear the crowd? Besides, I WISH I had thought of faking this! I'd have done it YEARS ago! I wish I knew how in fact. But I'm giving them too much credit. It's just the nature of the internet I suppose. People troll around being rude. I decided to document it scientifically so I started an Excel spreadsheet. I started by classifying the 78 comments I had at the time by general sentiment: Wow! Fake! Oh no the bird! and That's not a sonic boom.

My favorite version of Wow! is captainpickard's, "I'll have an order of KICK ASS, with a side of FUCK YEAH!" For Fake! I have to compliment stegre for "I have seem (sic) many edited films and this video has definitely been tampered. Your argument is invalid." It is both arrogant and nonsensical at the same time. Excellent work, stegre.

After I finished tabulating all the comments and started working on the chart I realized the last two categories were extraneous. And at that point I started getting spam. The thing about viral videos apparently is that they are viewed in exponential numbers. Since I started working on the spreadsheet another 8,000 people watched the video. Once those rates are high I guess the spammers come out and start hitting the comments section. Other viewers are quick to tag them and make them go away though. Thank you nice people!

Around 65,000 views a hater claimed Russia is better than America. Within minutes three people jumped on that comment. Looks like I can just relax now and let the internet public fight it out among themselves.

Meanwhile I'll be having fun making childish videos for my niece-oriented blog where all the video is on Vimeo instead of YouTube. iMovie '10 is fun!
Posted by Beachton at 11:41 PM