Well the YouTube video is up around 650,000 views now with 571 comments. A solid 5 star rating with 1902 votes. The early international lead in Japan has expanded across Europe and Asia. The comments continue to be amusing. I've been asked questions in Japanese, been complimented in Chinese, flamed in German, and puzzled by Romanian.

これって平面的に広がってると思ったけどこの映像を見る限り三次 元的に広がっているように見えませんか？
Do not see a source that has spread to third but judging by this video I wanted to spread the planar What is this? 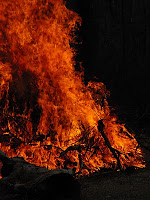 ﻿weckt mich mal﻿ wenns interesannt is... bin bei 20 sekunden eingeschlafen
wie﻿ der nigga zu dumm zum filmen is
There's something sad about going to the trouble to copy and paste mystery text into Google Translate to find out my video made them go to sleep in 20 seconds and is not worth {doesn't translate.} I feel sort of pathetic.

I'm not sure about this comment from manteescu1000 in Romania. His top favorite video is by Gary Glitter and he thinks our space program is primitive?
primitiv mod de lansare,o teleportare,star﻿ gate ,un warp !
omenirea este in epoca primitiva !
primitive method of release, a teleportation, star gate, a warp!
mankind is in primitive times!

Some of the comment threads just have to be captured in full to convey the humor. I liked what shad0wcaptain said. I actually swapped business cards with the guy standing next to me who I believe is the one laughing. I emailed him to see if he recognized himself but he hasn't had the bandwidth to watch the video yet as he was traveling. He's back in Melbourne (Australia, not Florida) now, where he lives, so I expect he'll let me know soon if that's really his laugh. My brother Harry likes the Mr. Musik thread the best.

Man, some people just really can't handle the camera work. Yet they don't seem to have a problem with grammar mistakes like I do. Your/you're and who's/whose mistakes make me cringe more than camera shake.

I wonder what makes Asyphyxium001 think I'm highly qualified, motivated, and engineering-oriented? Just the fact that I made a special trip to a sparsely attended rocket launch? I suppose I should just take the compliment. But it hurts my feelings that people keep dissing my beautiful tripod. I didn't FORGET it. I left it in the car on purpose! It's freaking heavy! It would invade other people's personal space. And I wasn't sure how hard it would be to track a rocket, having never watched a launch before. I figured with a monopod at least I could very quickly pick up the whole thing and aim the camera by hand if I needed to.

Maybe alrigh7 isn't James Cameron, but artistry80, I know who you are :-) Thank you for coming to my defense and for making me laugh.

There is a whole class of viewers obsessed with the bird. Here is a humorous selection. Incidentally, Mr. Sultana was within 2 feet of the actual length of that rocket, but I think he overdid the hyperbole on the wingspan.

And finally we come to the last two treasures of YouTube comments. Claims of fake and cool new friends.

Now brdavis5 turns out to be a part-time physics professor and author in Indiana. His YouTube channel has some really cool stuff -- rockets, geysers, lego boats, autonomous ball shooting robot tanks. He has the same high speed camera as me. He is using it to analyze the speed of his hydrogen rockets. I sent him a message on YouTube and now we're email friends. He's helping me work out a scientific explanation of what exactly happened up there in the sky. He suggests that the ice crystals in the cirrus cloud were tipped to reflect the sun just right, like how a digital light projector works. I don't know enough about cirrus clouds to know if it's likely that they would all line up just right from a high amplitude 20 Hz wave. But I did find this Mythbusters episode that reminded me how powerful that sound is, yet harmless to glassware in free space.


*Update: More Japanese. The Google Translator cracks me up. Thanks yassy558!


衝撃波が同心円状に、水面に落ちたしずくのように美しく見えると は、奇跡の画像です。
ありがとうございました。すばらしい！！
Shock waves of concentric circles, and looks as pretty as a drop fell in the water is a miraculous image.
Thank you. Great! !
天空に潜む高速の波が実際に見えました。。
涙適感動。
Seemed to lurk in the sky really fast waves. .
Suitable impressed tears.
Posted by Beachton at 5:18 PM