After studying the official tsunami reports on the National Weather Service website I tuned in to watch live coverage on Hawaii News Now. This is all oceanographic excitement from the from the 8.8 earthquake in Chile. There are lots of other places affected, including California, Oregon, Washington and Alaska. But Hawaii seemed the most interesting. The TV station has a remote camera on Hilo Bay. The surging water was so dramatic I decided to take some screen shots. The bridge in the shot is 10' high. 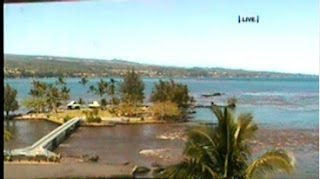 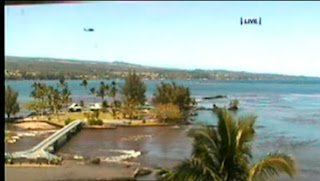 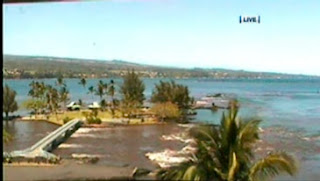 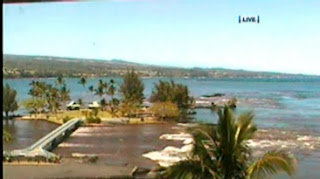 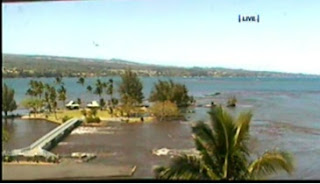 12:29, outrush again. missed the crest because TV station was on another shot


The main effect from this activity is going to be extreme turbidity. Corals have the ability to move some sand and silt off themselves. They will be busy doing this for a while I expect. Some of the delicate ones can get broken by such an unusual surge, but this probably wasn't any worse than storm swells.
Before this action started the announcers reported news from the people watching the whales off the coast. They all of a sudden moved off shore. I couldn't help thinking of one whale turning to the other whale going,"Shhhh.... Do you smell that? Let's get out of here!"

The official report has these numbers already: