Geoffrey Forden wrote an article with a missile-centric explanation of the waves in my video.  Since he used my image I'm going to go ahead and use his too. He draws this nice diagram to show how the shock waves from the rocket traveled through the cirrus cloud. 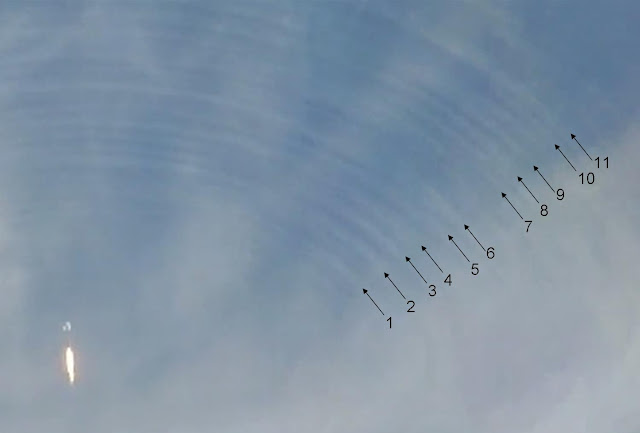 Then he picks out the individual waves in the cloud and correlates them to points on the vehicle that could make shock waves at the cusp of supersonic flight. I'm not sure it's so cut and dry though. I think the ordinary acoustic waves following the shock waves do something too. 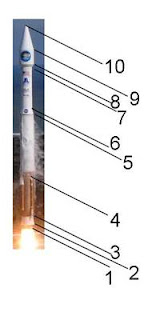 The comments after this article are very informative. I like this one about the cloud.

The “cloud layer” is actually a thermal layer or boundary with warm, moist air below, cold air above, and a layer of ice crystals at the boundary. Such thermal barriers create optical refraction effects similar to those between glass and air, and critical angles beyond which they begin to reflect instead of refract. It’s the latter effect that’s responsible for the visible waves.

It happened to be a very calm day with no wind or turbulence, which made the thermal layer abnormally flat and abrupt — pertect for the observed effect.


(Thanks to Phil Plait for sending me this link.)
Posted by Beachton at 3:49 PM