The Small Year only has a few days left and I'm behind in reporting my accomplishments. I've been busy trying to reach a milestone, full laundry capabilities at home. This required me to finish the back 10 feet of the Spartan. I had to lay tile, buy and install all the 1x4 tongue and groove walls and ceiling, learn how to do two part plaster, find some, and do it, wait for it to dry, wax it, install trim work, and retrieve from storage and hook up my washer and dryer. I went ahead and put in my sink while I had my helper here from Jacksonville.
My machines were ready on Thursday the 20th of December but I didn't get to wash these towels until Saturday Dec 22. There was a lot of other chores I had to do for other people first. I got my mother and aunt all fixed up for a cold winter with chemotherapy, with a new toilet, metal framed bed (indoors!) and revamped plumbing under their house for a shower (indoors!).

Here's the outside of my new laundry room. 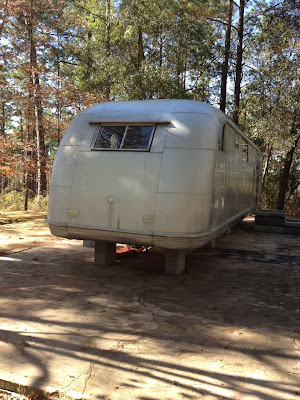 The front 20 feet of the Spartan remains to be done, as well as finishing up the trim in the laundry room and setting the toilet.

Trick is I really hurt my back with the tile and the plaster and the moving those heavy things. I think I herniated a disc back in September and there's not many things I do that don't aggravate it. I'm considering how to occupy myself for a while without bending over or picking up heavy things. It's sort of a lost cause. All my favorite activities require bending and picking up heavy things. I can't even sit down to work on the computer it hurts so bad. Fortunately my computer works standing up, so that's how I'm writing this. Having an iPad so I can read lying down is really helpful, but the Blogger app is lacking. Lesson: Aging sucks. Plan ahead to have all your heavy stuff where you want it before you hurt yourself.

On the topic of achievements and the end of the year, I sort of despise year end wrap ups and lists and stuff. In case I don't make it back to the blogging before next year I will say that doing a Small Year suited me. Not as small as I would like, but the basic ideas of reduce, reuse, and recluse were a driving force. I'm going to do another one.
Posted by Beachton at 3:36 PM 3 comments:

So, guns. What're we going to do about them? Here's the typical reaction of people who don't understand guns in the New Yorker.

THE SIMPLE TRUTH ABOUT GUN CONTROL
Posted by Adam Gopnik

I happen to think that article is simple-minded and basically wrong. This very long and cogent article seems more salient to me.

AN OPINION ON GUN CONTROL
by Larry Correia

First the author establishes that he has first hand knowledge of the topic. I think the first article is exactly the sort of argument Larry Correia is tired of. Frankly I find all the arguments back and forth of what country tried what gun control and how it worked kind of tedious and irrelevant. At the end of the Larry Correia's article he gets down to it.


We’ve already seen that your partial bans are stupid and don’t do anything, so unless you are merely a hypocrite more interested in style rather than results, the only way to achieve your goal is to come and take the guns away. So let’s talk about confiscation.

They say that there are 80 million gun owners in America. I personally think that number is low for a few reasons. The majority of gun owners I know, when contacted for a phone survey and asked if they own guns, will become suspicious and simply lie. Those of us who don’t want to end like England or Australia will say that we lost all of our guns in a freak canoe accident.

Guns do not really wear out. I have perfectly functioning guns from WWI, and I’ve got friends who have still useable firearms from the 1800s. Plus we’ve been building more of them this entire time. There are more guns than there are people in America, and some of us have enough to arm our entire neighborhood.

But for the sake of math, let’s say that there are only 80 million gun owners, and let’s say that the government decides to round up all those pesky guns once and for all. Let’s be generous and say that 90% of the gun owners don’t really believe in the 2nd Amendment, and their guns are just for duck hunting....

So ten percent refuse to turn their guns in. That is 8 million instantaneous felons. Let’s say that 90% of them are not wanting to comply out of sheer stubbornness. Let’s be super generous and say that 90% of them would still just roll over and turn their guns when pressed or legally threatened. That leaves 800,000 Americans who are not turning their guns in, no matter what. To put that in perspective there are only about 700,000 police officers in the whole country.

Let’s say that these hypothetical 10% of 10% are willing to actually fight to keep their guns. Even if my hypothetical estimate of 800,000 gun nuts willing to fight for their guns is correct, it is still 97% higher than the number of insurgents we faced at any one time in Iraq, a country about the size of Texas.

As part of the ineffable gun culture I know in my gut that all of this is true. Most people I know have at least one gun. Some people I know have large safes with a whole lot of them. And they do not want to hand them over. I don't think my dad would set up on the roof of his shop to shoot people who came to take his guns, but he would definitely donate a hell of a lot of money to the political campaign of the person who would stop that ever becoming a law.

I have never bought a gun. My mother and aunts probably haven't either. But we have them. Like Larry Correia said, they don't really wear out. They're passed down from generation to generation. I have a handgun because my uncle gave it to me for a graduation gift when I got out of college. My mother told everybody I was going to be a high school science teacher in Miami. First thing my uncle thought, "She's going to need a .38." This is normal where I live.

(Of course I wasn't really going to teach high school. I'd be terrible at that. I went to work designing antenna controllers and never needed to get a concealed carry permit to take a gun with me to an electronics factory.)

So as a thought experiment I imagined getting rid of my hand gun, like people in the UK think I should. It's my mission these days to sell anything I don't need that's worth money. Maybe people are hoarding hand guns all of a sudden because they're afraid of backlash from this event. Maybe my .38 is worth a couple hundred dollars. Maybe I should sell it. Let me mull that over in my mind. No more revolver in the house....
I don't like this thought. I'm just telling you, people who didn't grow up like this, it feels weird. The idea of being left with just a .22 rifle is disconcerting. I have no specific scenario in mind where I need the capability of a higher caliber weapon. It just FEELS weird. My uncle gave it to me. He's dead now and he was one of my favorite people. I want to keep the gun he gave me. He wanted me to have it. He wanted me to be able to sit up in bed and scare away an intruder by shooting right through the front door. He wanted me to be able to put down a wounded dog to stop his suffering after the evil dog-fight people put him out in my woods to bleed to death. I'm sure my wanting a gun, more than one gun actually, is just as weird to people that don't understand gun culture as wanting a tattoos is to me. But we have to just accept that we don't get it and not judge people for that little part of them we don't understand and try to find our common ground to be friends.

Of course I would turn in my guns if there was a national confiscation. But because I don't actively WANT to do it, and I'm liberal, I feel fairly confident it is never going to happen. So all these other arguments are moot.

The discussions of how to do media coverage without making the shooter famous are the important ones. Not encouraging other losers to become powerful in an act of horror is valid. Let's talk about that and leave off the guns.

Posted by Beachton at 9:57 AM No comments:

Email ThisBlogThis!Share to TwitterShare to FacebookShare to Pinterest
Labels: guns

Check out this video where a young leopard kills a baboon then finds a baby baboon and makes a pet out of it. I don't care for the narration. I'd rather watch it plain, without somebody telling me what human feelings to assign to the leopard at any given time.

Actually, even if that was a human and not a wild animal I still disagree with their assessment. I have no idea why I had to get that baby deer out of the hole. I'm pretty sure it wasn't because I was torn between being a mother and a playful child. Maybe there is just some universal instinct to give a baby a bit of help when it has a mishap.

What's that all about then?

Deer in a Hole from barbara tomlinson on Vimeo.

I notice that leopard video just kind of ends before the leopard eats the dead baboon, let alone before the baby dies. Because ratings?
Posted by Beachton at 9:15 PM No comments: