“My father! He sounds like a turtle chewing a hard boiled egg! There’s more couscous lodged in his wrinkles than he managed to swallow! One Labrador isn’t going to cut it. We’re going to need to get a terrier to clean the food off Dad’s shirt!” she exclaimed.

“Oh,” Phil said. “Well, he doesn’t have to eat with us,” he problem-solved over his shoulder as he left the kitchen.

The next night at dinnertime Lois served four plates and then took one of them to the living room. Her father was sitting in his chair watching the financial news. She set up a little folding table without even waking him. Then she shook him gently by the shoulder. “Here’s your dinner, Dad. I thought you might like to eat here while you watch your show so you don’t have to get up.”

The rest of the family sat down at the kitchen table. When Junior finished his first helping he got up to take the biscuit basket out to his grandfather to see if he wanted another one. Then he sat back down and ate all the rest of the biscuits with butter and jelly.

After Lois cleared the table she went out to the living room to get her father’s tray. He had cleaned his plate. He always liked okra and tomatoes and meatloaf. And Lois had enjoyed hers more because she couldn’t hear him slurp it up. She felt very smug as she loaded the dishwasher that night.

On Friday night Phil brought home a rotisserie chicken. Lois cut off a thigh for her father. He liked dark meat. She arranged little piles of buttered rice and field peas. She set up the TV table for him while Phil and Junior served their own plates at the table. She sat down to eat and about the time Junior got a whole chicken wing in his mouth there was a crash. Lois ran to the living room. Her father sat with a knife and fork in his hands and all his dinner was scattered on the carpet. “Oh, Daddy!” cried Lois. She moved the TV table out of his way so he could get up. A waterfall of rice and peas fell onto the carpet in front of his chair. He stepped gingerly to not crush any into the carpet. Lois picked up the plate and the chicken.

“Buddy! Here Buddy!” Lois called. The dog came and obligingly ate all the rice off the carpet, neatly licking all the butter off every pea without swallowing a single one. Lois sighed as she went for a dustpan, a bowl of sudsy water, a sponge and a roll of paper towels. When she came back to the kitchen with her bowl of dirty water and soggy paper towels her father was at Junior’s place at the kitchen table finishing a portion of peas and rice while Junior gnawed on a chicken bone in the chair with no place setting. Junior asked his dad to be excused and everybody got up. Lois sat down to finish her own dinner alone, disappointed, but determined.

The next night Lois had to improvise because the financial news doesn’t run on Saturday. She served three plates as usual, then she put some of the mashed potatoes in one of her medium sized mixing bowls. She put in a spoonful of corn, some pole beans, and topped it with a slice of pot roast torn into bite size pieces. She poured some of the pan drippings over the whole thing. She poured some cold water in a plastic cup with a screw-on lid and a straw. She stabbed a spoon in the bowl and went to the back door where Junior was lying on the floor coloring. "Get the door for me please, Junior," she said.

Junior opened the door and Lois took the bowl and cup out to her father. He was on the back deck with Forbes magazine and his binoculars near the bird feeder. Then she went in to dinner with her husband and son. She told Junior three times to get his elbows off the table and corrected Phil when he tried to put his dirty knife back down on the placemat. It should be placed across the plate. She was getting the hang of this. Table manners would prevail.

On Sunday morning Lois went for her long weekly run while Phil made breakfast for the men. After she got back and showered and came out to the living room with her coffee she found Phil and her father reading the funny pages while Junior was building something with his Lincoln Logs. She sat down on the floor for some quality time with her son. “What are you building, Junior? Is this your house?”

“Yeah, that’s the house where we’ll live when I’m grown up,” said Junior.

“And what’s that you’re building out in the yard?” said Lois.

Junior replied matter-of-factly, “This is a trough for you and Daddy at suppertime.”

That night was Sunday Supper. Junior’s aunts and uncles brought dishes of food over and they had a big meal together. Everybody sat at the long table in the dining room, even Granddad.

On Monday night Lois left the TV tables in their little stand in the corner of the living room. She waited for the financial news to end, then announced that dinner was ready. Everybody sat down to eat together that night, and every night after that. 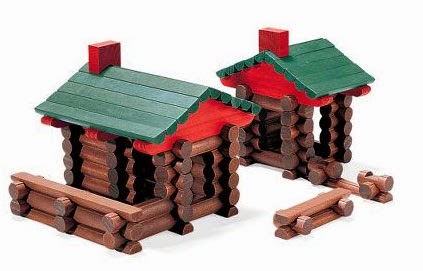 Updated version of the Grimm fairy tale "The Old Man and his Grandson,"
By Barbara Tomlinson ©2014

Posted by Beachton at 7:53 PM No comments: