Road trip to Titusville, Florida across the Indian River from Kennedy Space Center on Merritt Island. Blue marker is my actual tripod location. Zoom out to see Launch Complex 39A where Space Shuttle Endeavor waited for go. There was a nice sign by the park entrance that described it as a "unique stormwater park." That basin behind the outflow had a nice split face block retaining wall and a fountain with orange and red lights and waterfalls. All around it were brass plaques with hand prints and signatures of astronauts. Most of them had shorter fingers than me. 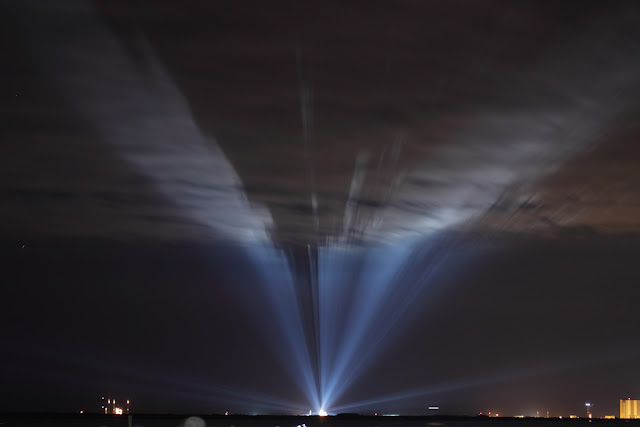 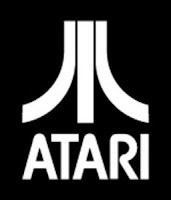 Saturday night the launch was scrubbed about 15 minutes before it was scheduled to go because of this low cloud cover. It made for fabulous light and shadow though. In person you couldn't discern this much detail. It just looked like the Atari logo flipped upside down. This is a long exposure with a long lens. Notice you can see the whole structure of the launch complex upside down in the cloud.

I got there about 4:00 pm on Saturday and it was already crowded in the Wachovia parking lot next to the park with the good view. I held a parking space for my friend from Jupiter who was bringing his good camera. When he got there we staked out a spot in the crowd in the park and waited in the cold for about 5 hours.

I wasn't sure what the situation was going to be like the next day because of Monday being a work day plus the Superbowl. I went ahead over there early and got there at 4:00 pm again. The parking lot was relatively deserted. I took my double folding chair down to the waterfront and found the front row was already claimed with empty chairs of people waiting in their campers. I found a spot just big enough for my chair next to the big concrete ball beside the pier which was reserved for media only. Then I waited in the car keeping warm with all the extra sleeping bags I borrowed from Keith and Vicki Huddleston, my hosts in Orlando. 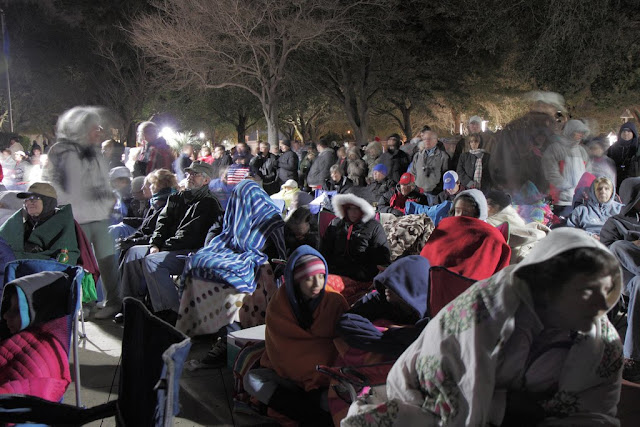 The crowds started showing up after the Superbowl was over. I felt bad about saving my spot with that chair when everybody else was waiting in the cold so I went on out there with Keith's amazing purple sleeping bag and my tripod. By 3:30 am when Jeff got there with his camera it was standing room only.

Media people were making their way through the crowd out onto the pier. I think I could have gotten them to let me out there by telling them I was a blogger -- they didn't require credentials, only an air of entitlement which is an act I perfected in college when I worked for the Technique. But I thought the pier was an inferior base for a tripod for a long exposure anyway. There were some people in aluminum foil accessories making a video of some sort. Nobody at the park seemed to care. The buzz was that they were from a reality show on MTV but it just wasn't the kind of crowd who was impressed by that. 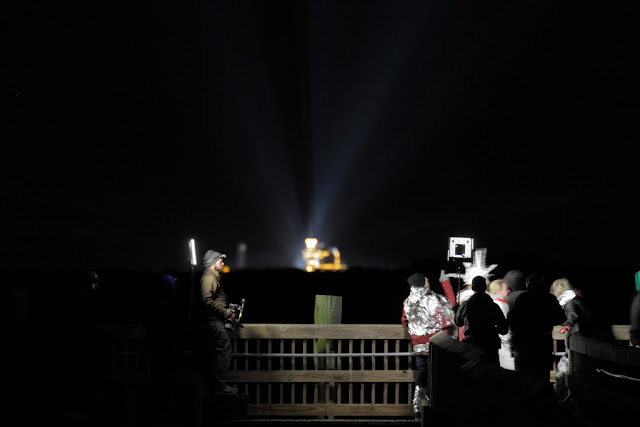 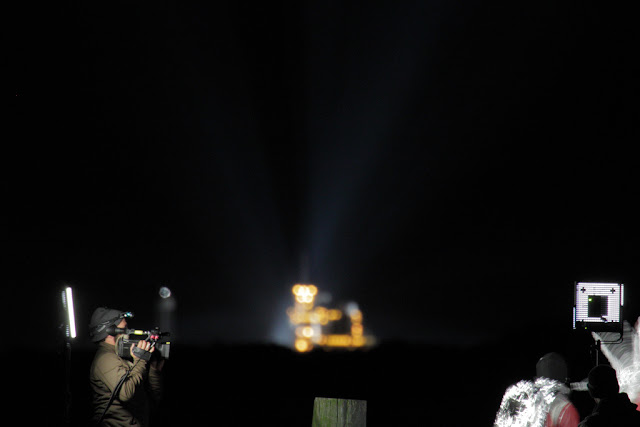 At 4:12 the park turned off the lights. At 4:14 am the horizon lit up and steam billowed to the North and South. Very quickly after ignition the shuttle lifted off and carried the light up into the sky. 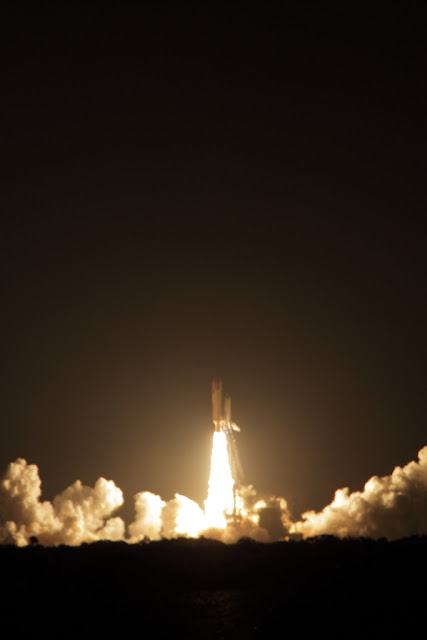 When it passed through the first layer of low clouds the whole sky lit up like a time lapse sunrise. Then the sound arrived. A palpable concussion to the chest and a thrill to experience. My educated guess it that it was about 95dB, loud enough to be fun, but less than half as loud as the  IMAX movie trailer for the space shuttle movie. I expect they're getting 110dB or better out of the movie sound system in the launch  scenes. 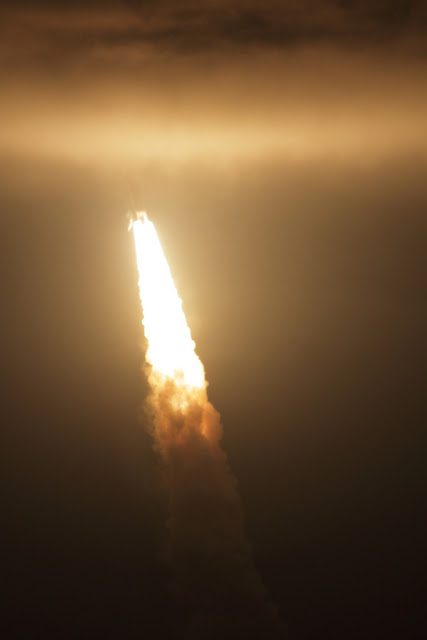 It was more beautiful viewed wide angle. I was glad I kept my camera put away and just watched. My National Geographic Twitter feed yielded one wide shot that shows the clouds lighting up, but it was way more beautiful in person and from the more distant perspective I had from across the river.


The couple behind us was exclamatory about the whole thing. You could hear their voices quavering as they said, "Oh my god! It's so beautiful!" and when the sound arrived they caught their breath and tried to find words for it. The man was a constant stream of commentary and then when the sound finally died down the woman said in a voice of awe, "Thank God for engineers."


It made me tear up a little bit, thinking of all the engineers like myself that are out of work and unappreciated. If it takes traveling a long way and waiting in the bitter cold for hours to have a 10 second experience to make somebody value engineers then it's no wonder we are in trouble. I can only hope the IMAX movie reaches more people. 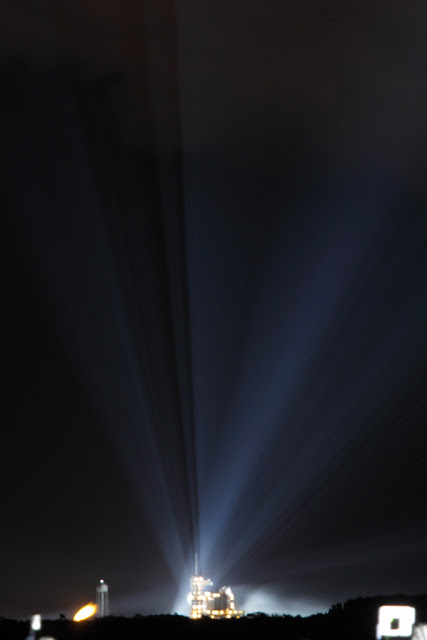 Launch pad minus the space shuttle. I'm glad I didn't miss the last night launch.
(photos by Jeff Jackowski with my tripod :-)
Posted by Beachton at 1:41 PM