I got this link from @mjrobbins on Twitter. Twitter, bad for our brains? There's a video of a TV interview with Baroness Susan Greenfield, a neuroscientist who doesn't seem to understand how Twitter works. She seems obsessed with the idea that "having ongoing relationships in three dimensions" is somehow critical to life.

I hope that's not true.

The defendant of Twitter, Mark Henderson, author of The Geek Manifesto, tried to explain how Twitter builds communities and helps you connect with people you wouldn't otherwise know. And the presenter said, "Well why can't you just meet them down the pub?"

What?! What pub? These people are thousands of miles away! This whole discussion acts like anybody you might possibly have anything in common with lives within 5 blocks of you. Well I can assure you that is not the case. I remember the first standardized test I had in grade school that had a math problem involving walking "blocks" and I had to get up and ask my teacher what that meant. Where I live I can take about a 15 minute walk through the woods to my grandmother's house, but there is nothing else. I can either have one dimensional relationships with people on the internet, or I can have nothing at all.

I do agree that she's right that moderation is essential for everything. I'm pretty good at that. I bought 4 pints of gelato the other day because it was buy-one-get-one-free and it comes in a good reusable container. I have only opened one of them and I just ate a little bit.

The only thing I don't seem to get tired of is taking pictures. I only share a tiny portion of them, but definitely more than anybody else shares with me. I think I understand that emailing somebody a picture of an accomplishment is not the same as sharing that accomplishment in person. But I also suspect that in person I would see their body language and know that they really don't give a shit. Just emailing it to them I get the feeling of sharing without the humiliation. It doesn't bother me at all that they don't reply to the email. 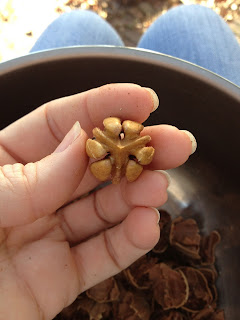 Sometimes I throw pictures up on Twitter, but only the ones of general interest, like a pecan with three segments. I only have two Twitter followers that I have met in person, and both are friends I met online and they live 350 and 900 miles away. Putting things on Twitter really is just like throwing a penny in a wishing well. I once tweeted one of my videos to @DbagChopra relevant to something he said. He made a joke and used the video link in his own tweet. He has 22 times as many Twitter followers as me. The Plays count on my video only went up by one. Just because it's on Twitter doesn't mean anybody is reading it, or clicking on it. I still do it though. I suppose it is natural to want to connect with other humans. So is Susan Greenfield saying that it's bad for your brain if your connection is not reciprocal? Is it unhealthy? Or at worst just a waste of time?

So for me it's one dimensional (or unidirectional) relationships or none at all. I imagine I'll eventually get to none at all, but until then, moderation. I have to go outside now and feel the wind in my hair. Apparently that is critical to my brain health.

Update 2/27: Martin Robbins (@mjrobbins) wrote about this on The Guardian blog. He thinks she needs to pin down a hypothesis before she goes to the media with these claims. We both kind of think she's just afraid of change.
Posted by Beachton at 1:30 PM