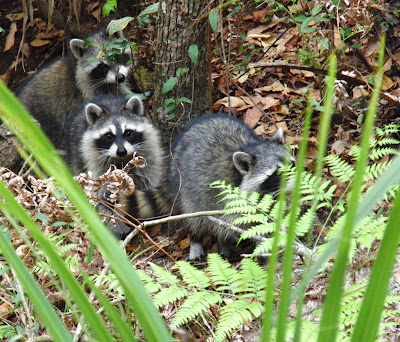 I've been wondering for a while about the evolution of ringed tails. Why does a raccoon's tail have rings? Why do Red Pandas? Or Ring Tailed Lemurs? The Ringtail Cat? What kind of convergent evolution is this ring thing all about? Is it just camouflage? To look like shadows cast by branches in the trees? It's not easy to get the answer to this question with regular Google, so I kind of keep putting off finding out. Then today I read this neat article about zebra stripes. Somebody finally did empirical tests with horseflies. It turns out that dark colored horses reflect polarized light similar to a pool of water. White horses don't have that invisible-to-the-human-eye resemblance to the fly breeding site. It's well known (apparently, to horse people) that flies bother white horses less. So the researchers tested variations of pattern and found that the wavelength disruption of black and white patterns is even less appealing to flies than plain white. Zebras for the win! (I like how they reveal their true scientist nature by conceding that tsetse flies, a horsefly relative, don't bother any animal out on the open plain, only around water.)

I suppose I could find out just what I want to know about ringed tails from a introductory biology textbook. I used to have one but I didn't have room to keep it anymore. From reading online college papers from people who do have these textbooks I gather that most of the ring tailed creatures, particularly raccoons and the red panda, seem to have evolved from the same distant relative, common to all in the superfamily Musteloidea. The ring-tailed cat is the same family as the raccoon, so it's easy to see how they have similar tails. Ring tailed lemurs? They're a wet-nosed primate, so I don't know. I'll just have to wait for some biology major to write a paper about it, somebody with library access and good search engine optimization.
Posted by Beachton at 2:30 PM