The Hill of Life

We had over two inches of rain Thursday morning at Barton Creek in Austin. We really needed it.  After the thunder and lightning and heavy rain stopped I headed out to see if I could see any affect on Barton Creek.

As soon as I got on the trail I heard something odd. Blehhhhh. It sounded like a goat. There are no goats on the greenbelt. I heard it again and it sounded more like a child. But unlike a child it just did it once and stopped. I figured it must be a deer so I climbed up the steep edge of the trail and peered under the low branches. Sure enough, right off the trail was this fawn. It looked like it was all wet from the rain and had slid down the hill, piling up some leaves with its butt on the downhill side. It didn't seem to be sliding anymore though. It was just unhappy. I took some pictures of it and then moved away and hid by a fence to see if the doe would come back. It was about 2:00 in the afternoon and really time for deer to be lying around chewing their cuds, WITH their babies. It was not looking good for this little guy. His mama should have been with him through that storm. Maybe she freaked out from the lightning and bolted. Deer are not the bravest of animals. I decided nothing was going to happen until later in the afternoon when deer get active again, so I went away. I kept coming back from time to time to check on him. I came back a final time just before sunset and found a place to sit up the hill from the deer, probably twice as far away as the trail where a lot of people were going by. I figured if the mama deer didn't mind them she really wouldn't mind me. I sat there with my iPhone and searched up the Texas policy on orphaned deer. They take a pretty firm stance for leaving them alone.  This one wasn't really fitting the criteria for non-orphaned deer. He was definitely crying. It was definitely an orphan situation. But I had waited too long and didn't want to bother one of the licensed wildlife rehabilitators. Most of them said not to call after 6:00.

Deer are not endangered. Lots of baby animals don't make it. Logically I know doing nothing is the right thing to do. But there is the complication of proximity to people in this case. Mostly I didn't want a dog to find it and drag it out on the trail and freak people out. While I was sort of hiding up there I heard probably 20 people go by. Even when the deer bleated right when they were walking by nobody stopped and went, "What's that?" The dogs were so preoccupied with the smell of what must be about 20 pounds of recently reconstituted dog crap they didn't pay any attention. It really did smell like a kennel at the top of that trail. 2" of rain was not enough to wash it away.

After I finished reading all the official information online on my phone and the deer hadn't made a sound for almost an hour I went down to check on him again. He was still. No breathing.

I picked him up and carried him up the hill away from the trail. I'm glad he was able to die peacefully instead of being killed by coyotes tonight. I'm pretty sure he'll be eaten by them either way. Judging by the scat there are plenty of coyotes out there.

Notes on video: I went on down to Barton Creek between checking on the deer and watched these Longeared Sunfish, aka Cherry Bream doing their breeding dance. They are very pretty.  I sat on that rock taking their pictures then this guy showed up with that big dog and washed him in the creek WITH SHAMPOO! I could smell it from where I sat on the waterfall. I think it must have been "Perch Plus." He threw the ball out into the creek to get the dog to rinse off. "Rinse your head!" he yelled at the dog. The dog stirred up so much mud I couldn't take anymore pictures of the fish. There is a strange dance of humanity, pets, and wildlife out there.

I feel the urge to protect the people from the wildlife, and vice versa. The other day when I saw a Western Diamondback Rattlesnake just laid right out across a boulder on the main trail up the Hill of Life. I sat there until full dark to direct people and their dogs around the snake. Nobody seemed the least phased by it. The dogs all bounded by oblivious to it. I still think I was right to sit there and keep people from stepping on it. As it got dark it was pretty impossible to see it. Fully 10 people and 8 dogs went by after I noticed the snake and took up my watch.


*How did the rain affect Barton Creek? Barely 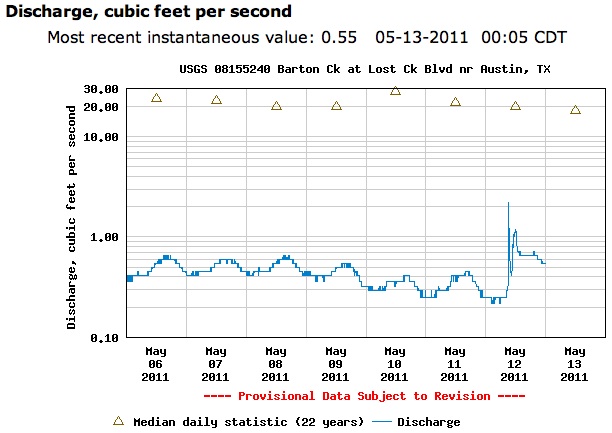