There's a bit of a hubbub today about a BBC story announcing new Scrabble rules. Apparently some people are up in arms that proper nouns will be allowed. I'm not really sure I get it. It's still the board game they're talking about. The rules are whatever you and your competitors say they are. When I play with youngsters I always change the rules. I allow any word they know or even want to make up as long as they can pronounce and define it. Fake pharmaceuticals make excellent Scrabble words, and compound words are great fun. HOTELWALRUS and PENICAL keep play amusing. Especially when you can keep going indefinitely and end up with PENICALTUSSINCORT and SPAHOTELWALRUS. I've also played with kids where you just divide all the tiles up at the beginning and you can make a word as long as you want.

Anyway, this new Scrabble turns out to be a new game called Scrabble Trickster. I still say it's silly. If you want to allow proper names, allow them. If you want to use the tiles to build little towers and knock them down you can. Once you buy it you can do whatever you want.

Where you run up against strict rules is with online games. I like to play iGoogle widget Scrabble with my friend Steve Leacock. We find the dictionary in the online version has some weird words -- they aren't even in my Apple New Oxford American Dictionary. ONO is in there. As in Yoko Ono. That seems to be a proper noun, but there it is. But perfectly good words like DOOK, not in there, yet TIPTOP is allowed. They let you try stuff in the dictionary first.

The first time I played Scrabble with Steve (at his house on an actual Scrabble board) he beat me so bad I cried in the car on the way home. So the first time I came close to beating him I was so surprised I actually gloated a little bit in the IM. He pointed out that when he wins he doesn't gloat. Sure enough my gloating jinxed me. It was just a lucky start for me, getting BIVOUAC for the first word for some 86 points. I was ahead until he got GRINDER (and EM and ROD) worth 88. It went downhill from there. I made a mistake at the end and made ATRIA instead of QAT and got stuck with the Q. But it was so close I made a screen shot of it as a lesson. 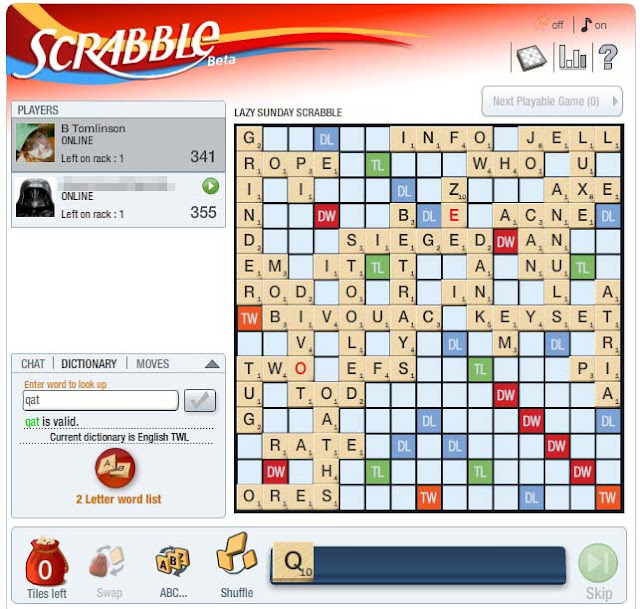 After this game we played a few more times. I finally won a game by about 5 points. Then he challenged me to a game he named NEVER AGAIN! 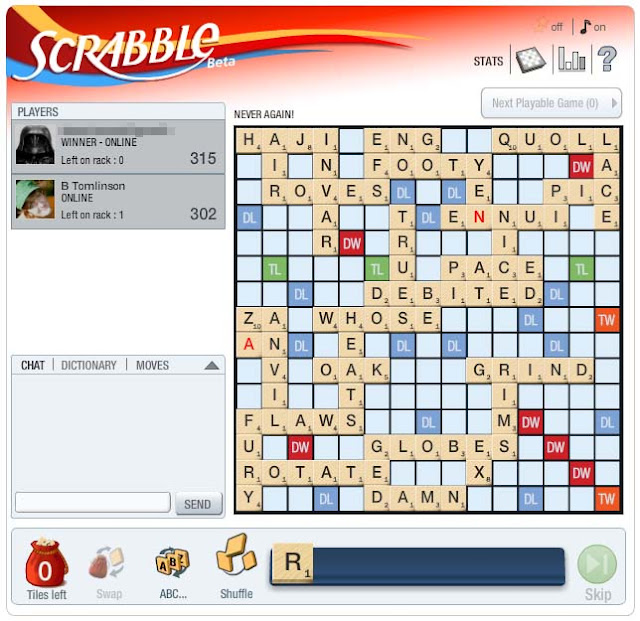 That game was close, but this past Sunday we played a game where I didn't really pay attention to the score and never gloated once. When there were about 10 tiles left Steve IMed some expletives and accused me of being a pain in his ass. Well what do you know! I'm winning! That's the key I suppose, don't pay attention to your lead. Steve questioned me on HEROINISM, but the game dictionary said it was a word. My Apple dictionary says heroism is a word but doesn't specify a feminine version. Apparently the Scrabble dictionary is more liberal. 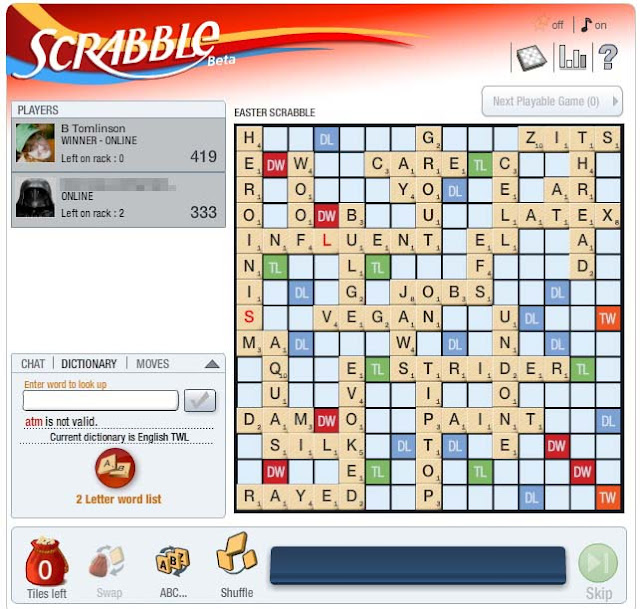 So the word usage is already questionable in the Scrabble dictionary. MI is a word for crying out loud. That song from The Sound of Music is one of the most useful Scrabble mnemonics to know. DO RE MI FA SO LA TI, all two letter words. EL, as in the elevated train, that's a word. Scrabble is not exactly a bastion of poetic virtue is all I'm saying. It may delay the onset of alzheimer's though, so let's keep playing it.

*Update: Steve sent me a link to a Stefan Fatsis article about the highest scoring Scrabble game of all time. Studying all those words does not sound fun to me. I do not want to be a Scrabble expert. I am appalled that anybody would question the word flatfish though. Of course that's a word. Every child knows about flounder and sole. Don't they? I guess it's another case of me not understanding the wealth of information not available to children in the midwest. I remember the time I was incredulous that my friend from Lincoln, Nebraska didn't know a pine tree from an oak tree. He said the only plant he knew on sight was corn. He knows a lot more about antennas than me though, so he's got that going for him.
** Update again:
Posted by Beachton at 4:03 PM