I think it's not morbid at all to fancy methods of dying that are as unlikely as having all your atoms line up and go like a train into a singularity. The part where those atoms later evaporate out again keeps up the human propinquity for memorializing the body. In his lecture last night in Jacksonville titled Beyond Global: Death by Black Hole & Other Cosmic Quandaries (All the ways the Universe wants to kill us) Dr. Neil DeGrasse Tyson discussed 12 doomsday scenarios. He picked number 7 as his favorite way to die -- by black hole. As tidal forces pull your body into pieces, first around your waist, then maybe at the base of your neck, you would be able to see it since your eyes are still connected to your brain through several severing steps. (Medieval experiments involving humans tied to horses determined by actual test which points are structurally weak.) 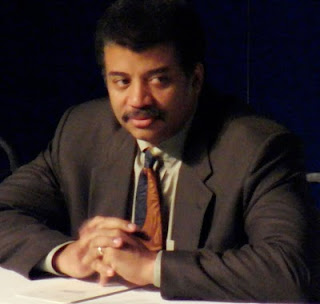 Dr. Tyson mused that the expression "off with his head!" should be "off with his body!" since the head is the source of consciousness. This sort of logical analysis and rigorous semantic approach is very comforting to me. This is science. Emotion was abundant in this lecture, but not misplaced. Dr. Tyson spent an hour illustrating for the audience how scientists can be enthusiastic about understanding how things work and solving problems, yet they are not hung up on their own well-being. Thought experiments about dying are not all confused with irrelevant notions like fear or a false sense of superiority.

He did speak briefly in the question and answer about how America is about to realize they are not leading the world in science and technology, thanks to the Large Hadron Collider. There was spontaneous applause. As one of the people that impulsively started clapping when he said it, I wonder if there were a lot of people like me in the audience -- bitter, out-of-work scientists. Because it is sort of a strange thing to applaud. We suck! Yeah! I suppose it was just nice to hear somebody say it out loud. Part of that whole scientific process. Once you define the problem you are on the way to solving it.

All the ways the universe wants to kill us. 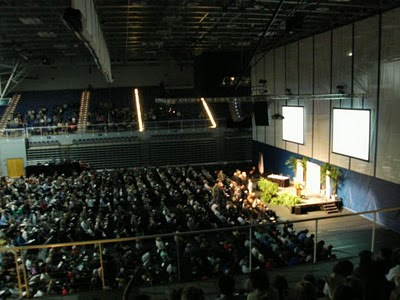 This list is for the students who were supposed to go to the lecture and write down the bullet points for extra credit (I know that's what they were doing because they got up and left the minute he said "this is the last slide.") Now to redeem yourselves click an ad on a scientist's blog today, you juvenile deliquents. 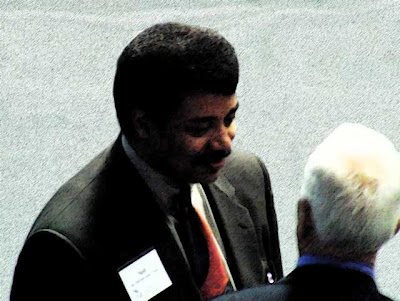 (all pictures taken by me from waaay up in this icebox of a balcony. With megaoverzoom, high speed night mode, and photoshop this was the best I could do.)
Posted by Beachton at 3:57 PM