EC2014: Across Florida Bay to the Finish Line

Harry and Bryan set out at 6:16 am this morning from Flamingo, with the sun and tide both rising. The weather station in Marathon said there were 15 mph winds from the West, gusting to 20. They had to beat into the wind slightly to get in the channel and start across the very shallow (1 to 2 feet outside the channel) Florida Bay.

The speeds early on were exceptional. The sailboarder was going 10 knots again. Harry was doing about 3.5 knots on an early track point, then the next time I checked he was going 6 knots. That's faster than I've seen him go all week! He must have strapped all his water jugs around his shoulders and hung out the high side of his boat by his ankles! I texted Wes this impressive news.

Then he stopped. His track went up to a little island and didn't move. I didn't get an OK message or anything so I figured he hadn't just had a close call or anything. He probably wanted to put another reef in his sail. I texted Wes to that effect. Wes guessed he was probably just stopping to unclench various orifices. 6 knots is a lot for N8R and Harry. I emailed Hugh Horton and he said that would be extremely tiring. I thought it was possible Harry was also using it as an excuse to wait for Bryan to catch up.
Interesting little place where he stopped though.
At 12:02 the track points started moving again. Bryan hit his OK button so I could tell they were together again. Harry went a lot slower after that, so I think he must have rigged up a lot less sail area while he was on that little island.

He got up to 4.23 knots going parallel to the Keys towards the finish. Yet it seemed to take so long! I was excited for him to get there!

Bryan's still not showing up on the results. Push OK, Bryan! Push OK! I think a lot of the results are a bit squirrely. They'll have to update them from the log books for people with devices that failed. I can't imagine they're going to DQ people for that. 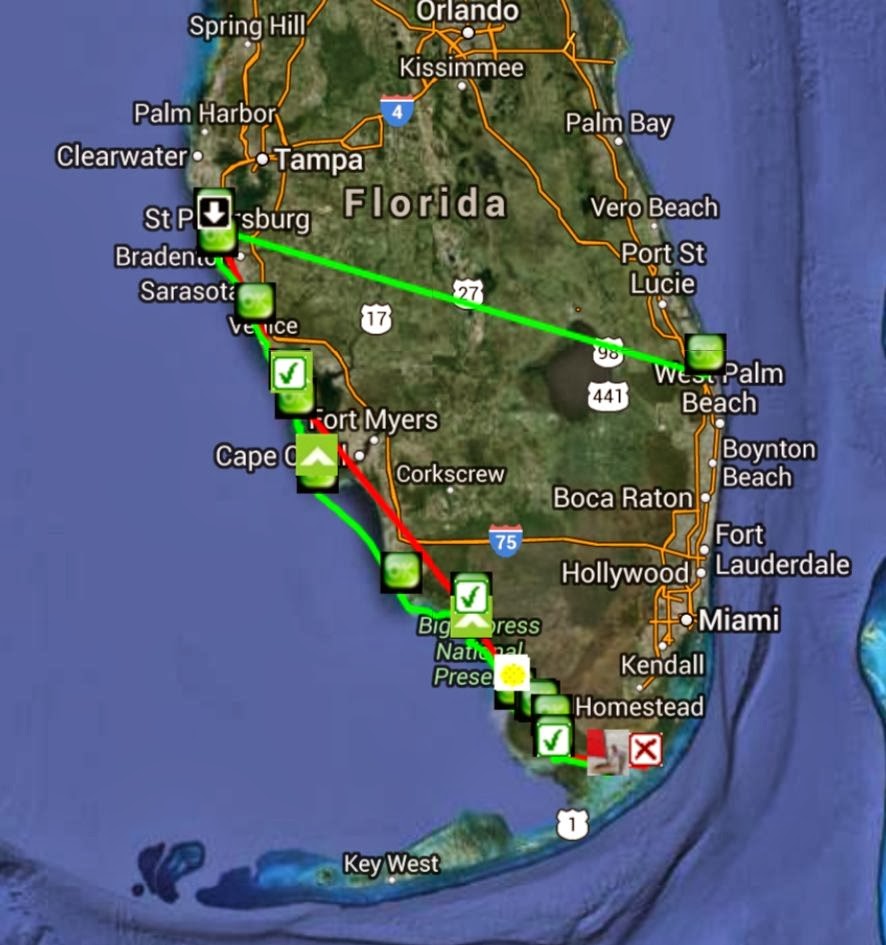 Here's the whole map of JibeTurkey's track for the Everglades Challenge. Now he just has to get back to St. Petersburg to get his car and be back at work in West Palm Beach on Monday morning. He has all weekend to do that. I think it will be very easily done. I think for a long time everything will be very easy, relatively speaking.

For the purposes of race-type statistics, here's the final results in Harry's class. I don't know why it shows Anonymous. Error in the database. Here's the results page if you want to study the whole thing. It's interesting to see who didn't finish. Like that Folbot Greenland II, made it to the first check point and dropped out. 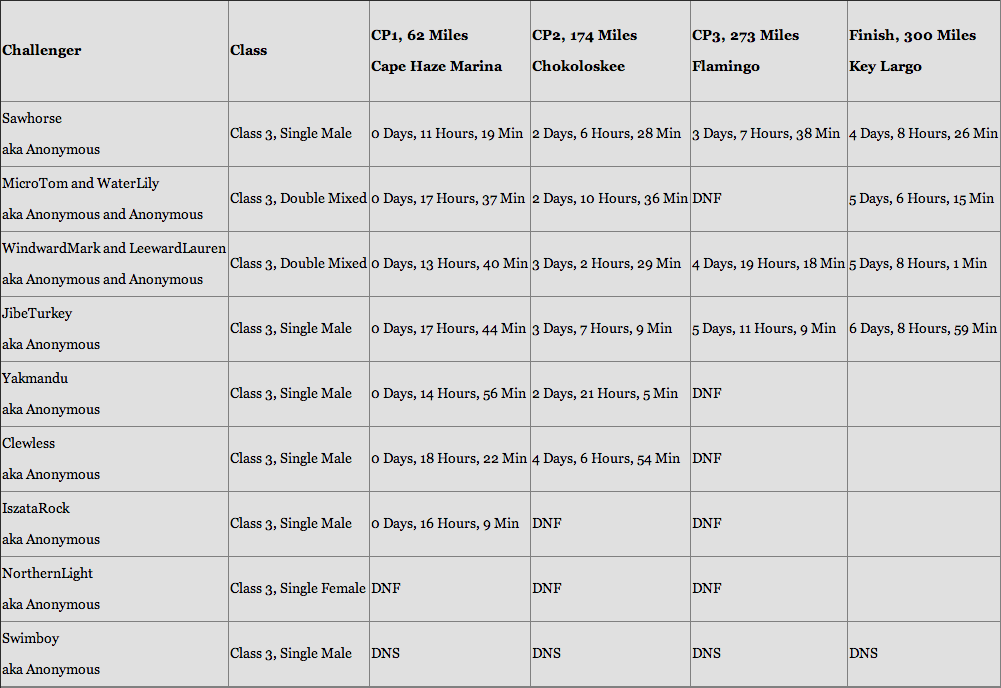 Despite moving over 10 knots across Florida Bay this morning, Sean Hawes on the sailboard got to the the finish after Harry. Wonder if that's an interesting story?

Somebody asked me why there aren't many entrants in Class 3. I think it's because sailing canoes aren't a mass produced product. You have to make it yourself or order one from a boatbuilder. That is held up as a barrier to entry. I think when it comes to barriers to entry for the Everglades Challenge the boat you choose is the least of your issues. And the barriers to finish are even more complex.

I have reached the extent of my ability to speculate. Maybe after some time to reflect Harry will write up his thoughts and let me publish them here on Spasms of Accommodation.

Thank you for your attention. It was fun! Now I think I'll go binge-watch that hilarious TV show about Vikings.