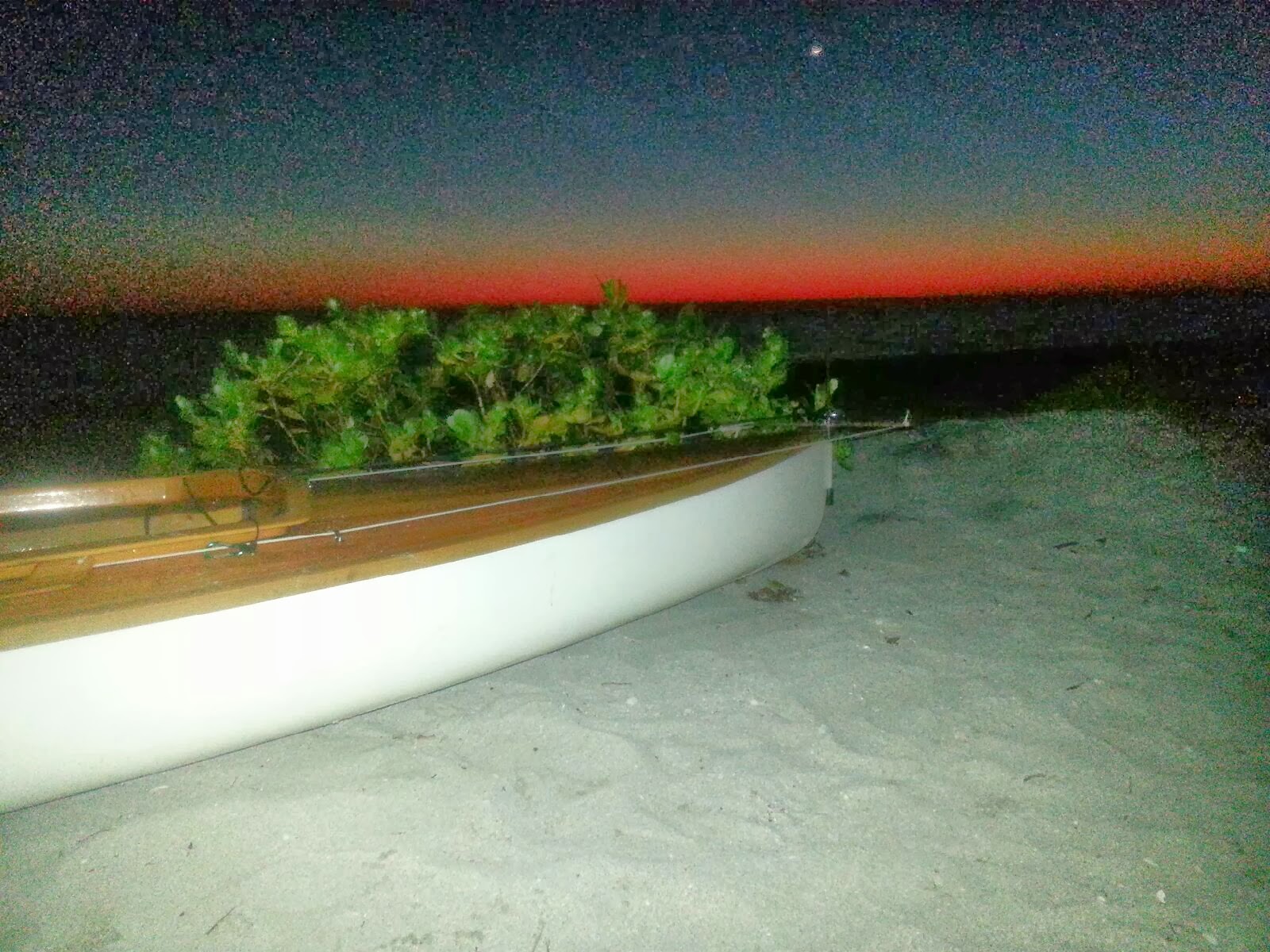 Harry and Bryan did stop to rest early on Sunday night after the short sleep after checkpoint 1 on Saturday. They stopped on Sanibel Island just past Blind Pass. I got the SPOT custom message, "I am going to camp here. Hope I will be warm," at 6:57. Then Harry texted me this nice photo of the gloaming dusk. I could see on the WaterTribe tracker that Bryan had pushed his OK button on the same spot so I figured they were just chilling out on the beach eating all their ramen noodles and tuna packets.

They stayed there a good long time. I didn't get another SPOT message until 9:22 am Monday morning. Then there was no tracking for a long time. Then at 10:51 am I got another one. Then the tracker started working. I never saw a new tracking location for Bryan though. He was still on the island at 6:50 the night before. When Harry called about 4:00 pm he said he would tell Bryan to be sure to push the OK button.

He said Bryan consulted the Sailflow website on his phone and made a float plan. He set a course for a cut near Marco Island, but there was no wind in the early morning. Harry said Bryan made him paddle for what seemed like 5 hours. (By the map and weather reports I think it was just 2 hours.) When the wind picked up they were mostly just sailing on the fastest course they could achieve, planning to change direction with the turning wind and end up where they wanted to go. They had been out of cell phone range most of the day cutting across the open water. As they got closer to Naples and Marco Island they could use the phone again.

At 6pm Monday the tracking map looked like this.

I kept hoping they'd go over to the shore and rest but they just kept going. Finally I saw them nearing Marco Island. I got an OK message at 11:10 pm Monday night. I'd sent a variety of texts for perusal later and I got one back. "Need water." I zoomed in where he'd landed.
Man, look at all those giant condo complexes! I texted him back that there was a swimming pool full of water straight in front of him. (Hurr hurr.) But they probably also have a hose bib and a cold shower on those boardwalks down to the sand. I decided to text him this picture and tell him to watch out for those three groins when they set out again. I couldn't imagine they were going to camp right there in front of those big buildings. It would be like taking a vacation to see a Formula 1 race but being forced to sit through a NASCAR race the night before.

At 12:18 I got another OK message. I assumed it meant they were setting out again. I could see Bryan had pushed his OK button on the island too, so they were still together.


I thought maybe they would maybe go past Marco and camp on one of the keys in Thousand Islands. Maybe even on Dickmans Point. I would definitely have stopped there. (In fact I am so easily amused by that I blew up that iPad screen shot in iPhoto and took a screen shot of it on my Mac just so I could put it here. I spent the day troubleshooting why iPhoto that won't let me export cropped iPad or iPhone screen shots. Decided it's a bug. Anyway, that's why this update took me so long.)

I haven't been shirking on my race tracking duties though, oh no. In fact I check it so much this happened last night. (uncropped, I give up.) It says "This site has exceeded its daily quota for maps." 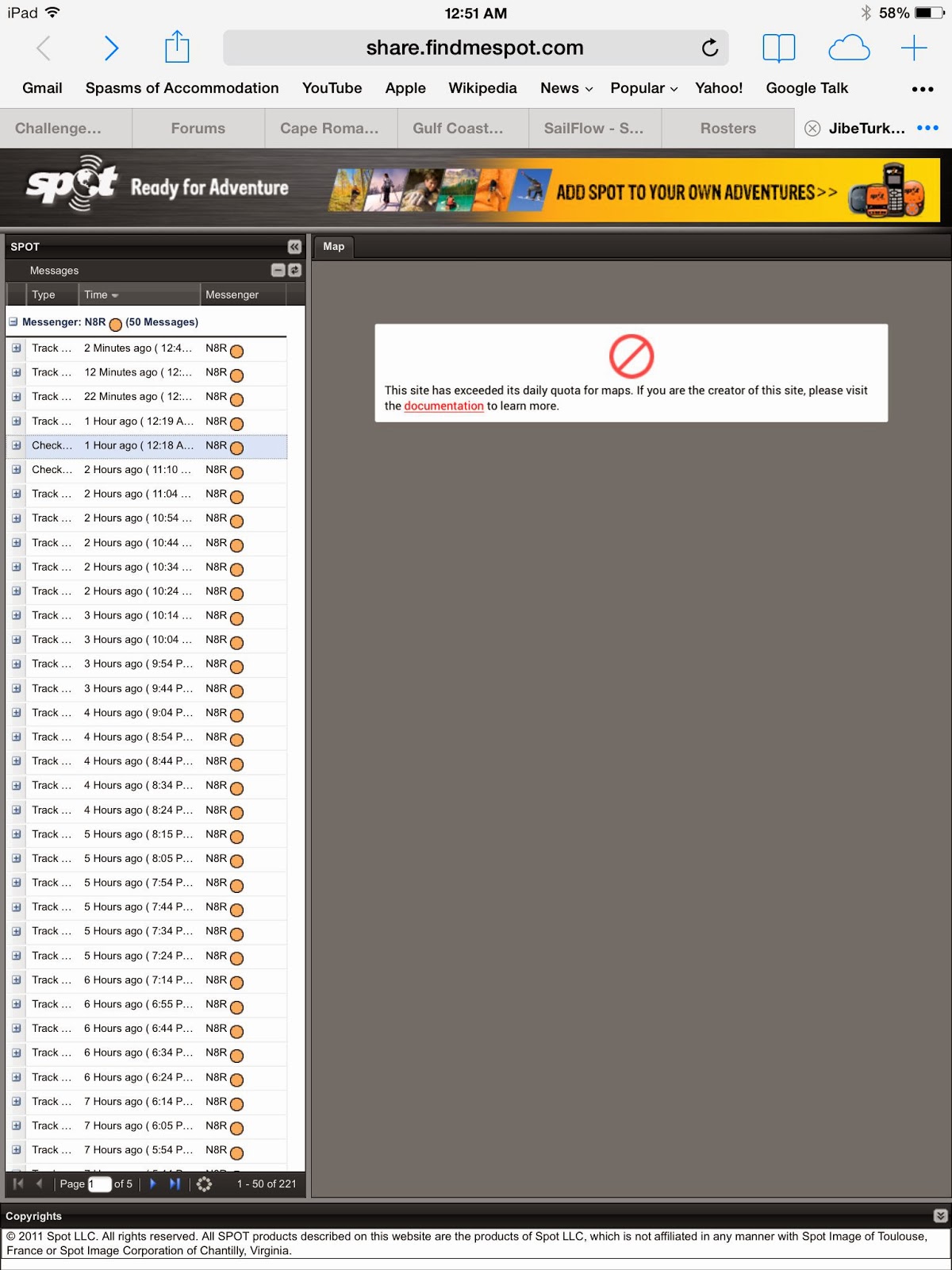 I don't know if the Everglades Challenge singlehandedly used up the map quota or what. It was 12:51 am EST, so I guessed the daily quota was based on PST so it would probably work again in just a couple more hours. I'd forgotten all about it the next time I woke up to check on Harry and Bryan. 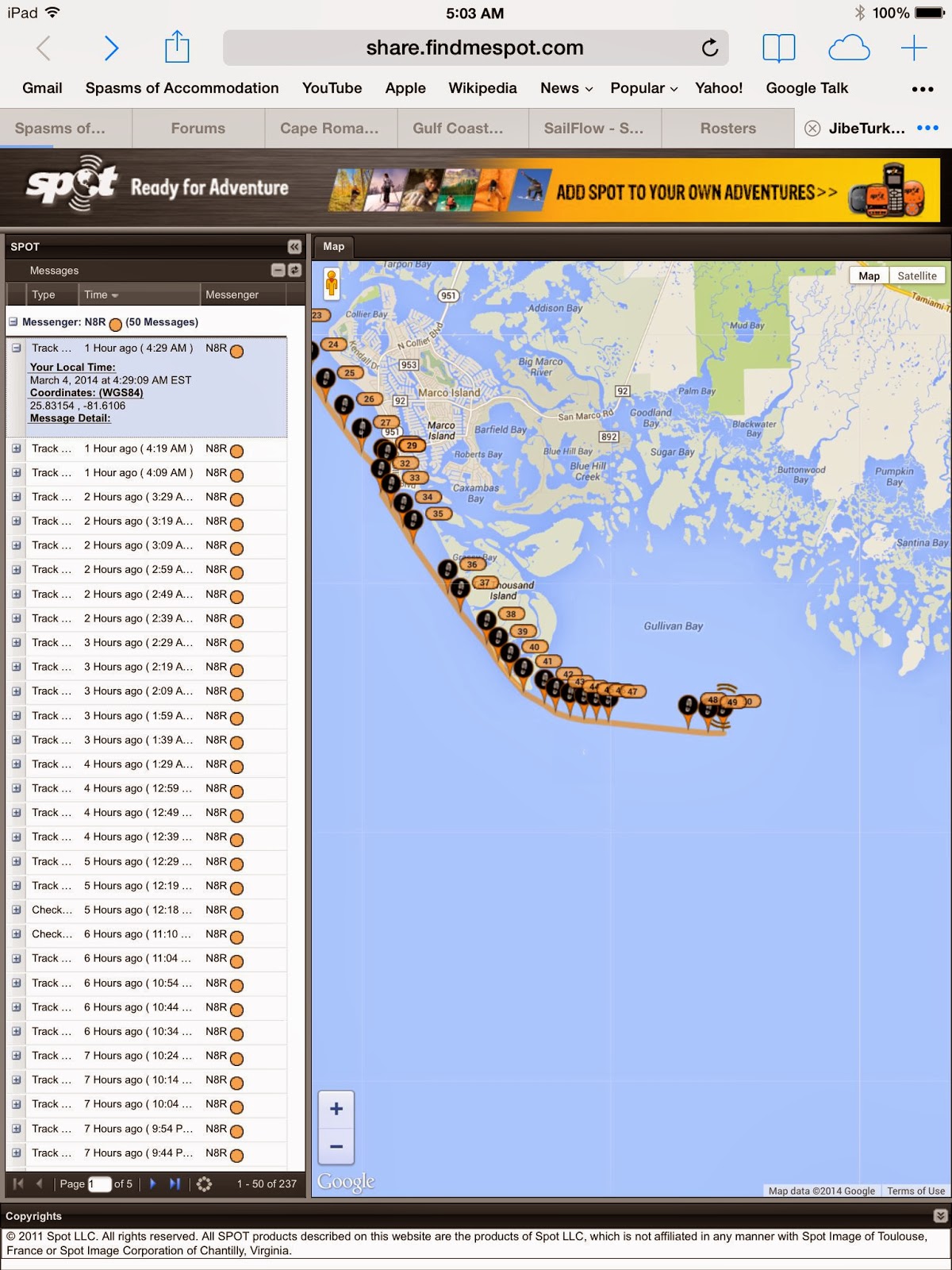 They are just out in the middle of the ocean again! And this time it's DARK! I bet the stars were amazing though. I figured there was no way they had cell phone coverage out there either.

I took a screen shot of the Challenge Tracker at that time too, just to see where the other WaterTribers were. Sunrise was only another hour and a half away, the temperature was above the dewpoint, so no fog or depressing chill to worry about. They were likely fine.

About 8:30 I was looking at the map and even though I figured it was unlikely they had cell coverage I texted Harry that Picnic Key was coming up. I couldn't imagine they wanted to just keep going without resting. The next tracking spot showed Harry turned. Then he ended up doing this maneuver.

I pondered this move. I texted our cousin Wes. I'm sure he was busy at work and couldn't answer, but I like to share.

But they just KEPT GOING!

The thing at the beginning, point 1 to 9, I don't know what that was. They got on track again and landed at Everglades City at about 1 pm. That's where the Everglades National Park office is. You have to get there between 8:30 am and 4:30 pm to buy a permit for camping. They moved on along to the WaterTribe checkpoint and hit the OK button on the tracker at 2:08 pm.

Here they are on the results page with some other people who got there near the same time. 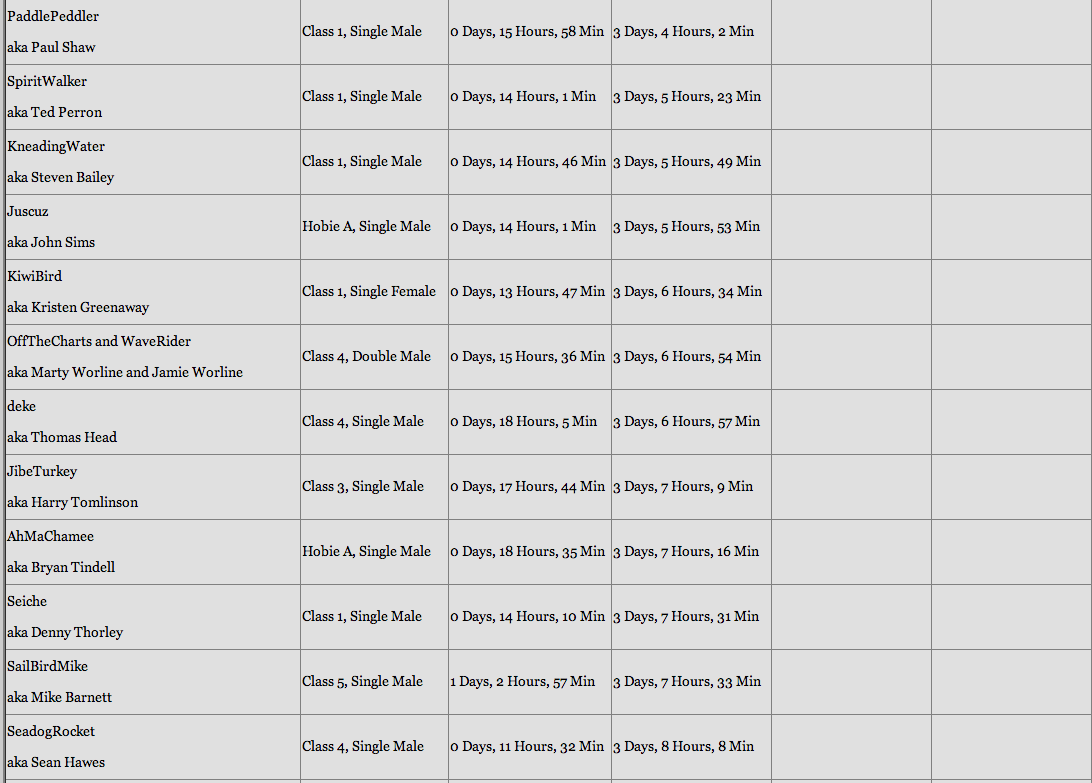 I'm pasting in the top of the chart below it so you can see what the different classes mean. I think it's interesting that all the different classes were getting to the 174 mile mark at about the same time. SailBirdMike was out there with JibeTurkey and AhMaChamee all night, while the kayakers were close in to shore and taking the shortcut behind Marco Island instead of going farther to stay in the wind. The point of the whole thing is to show how very different boats can participate equally.

Harry called me around 4:30 from Chokoloskee. He said he was very tired after being awake for 36 hours. I said he sounded surprisingly normal. He allowed he may have gotten a second wind after having a good lunch at the Cuban restaurant.

"But I was incoherent this morning," he said. " I thought I was going backwards. But Bryan caught up to me and convinced me I was going forward."

"Harry, there's no current, it's fine! You're hallucinating!" Explained Bryan.

"So I just concentrated on two points on the shore and convinced myself that I was going forwards," Harry said. "Bryan and I just have to look out for each other."

It sounds like a solid plan. Between two of them operating on about half a brain each they add up to one lucid individual.

I asked if it could be caffeine withdrawal hallucinations but he said he made coffee on the beach at Marco around midnight last night and sipped out of his thermos all night. That makes me feel a lot better about the whole thing.

They are heading out of Chokoloskee to try to get to a camping spot. "Hope we make it," Harry said flatly.

As of 7:30 Tuesday night they still haven't stopped. They really need to stop and sleep. They haven't slept since Sunday night on Sanibel Island. 39 hours and counting. If I see one of those crazy course changes I'll figure one of them is hallucinating again. I hope they take turns at becoming incoherent and don't both see a mermaid at the same time.