At the end of my last post Harry and Bryan were in their 38th or so hour with no sleep on Tuesday night. I finally got an SPOT custom message at 10:41 pm EST that they were stopping to camp. Look at this adorable little island!
I had this mental image of Harry falling out of his boat exhausted, scrabbling in the sand with his hands like an edgy combination of J. Alfred Prufrock and Sandra Bullock at the end of Gravity. He would spend 5 minutes being dramatic for a low angle camera while the boat drifts away. They do this in films and on TV and I find it utterly nerve wracking, like leaving the refrigerator door open. I cannot concentrate on a single thing anybody says in front of an open refrigerator or with an unanchored boat in the background. (I'm talking to you, Gake no ue no Ponyo. Even though I watched it in Japanese and had no idea what they were saying I cringed when boats drifted away from anthropomorphic cartoon fish in the middle of dramatic dialog.)

I texted our cousin Wes to express my concern that Harry would be too tired to secure his boat. He reassured me. "He won't. All he has to do is pull it up above the tide mark. Will he finish tomorrow?" I was still worried because I could see that the tide mark was about the width of the whole island. Then I got another SPOT text and replied to Wes. "There's the OK message! If he's coherent enough to push that button then he's lucid enough to pull the boat." Then I explained to Wes that I thought it would take them at least 3 more days.

Right after they got to Pavilion Key another boat arrived, DivesWithKraken and WyomingWolf. The roster says they have a Hobie Tandem Island, which is similar to Bryan's boat but longer with a bigger sail. In the movie version they would have built a perfect campfire on the beach. The low angle camera would show the four of them sitting on picturesque driftwood holding polycarbonate wine glasses perfectly backlit, laughing with big white teeth. The men would be snappily dressed with collared shirts and creased trousers and Wyoming Wolf would be wearing a bikini and a scarf around her hips and her hair would have required 20 minutes with a straightening iron. They'd have color coordinated hammocks in the trees behind them. I doubt this is how it really went down. They probably sucked energy gels out of metallized plastic pouches and rolled up in tarps on the sand like gritty burritos with their filthy feet sticking out the ends for the raccoons to nibble on.

At 1:10 in the afternoon on Tuesday they stopped on Plover Key. It probably looked just like this with the sun high in the sky and the tide.

After a bit of rest they kept going on an interesting course among beautiful little islands. I can't wait to hear what wildlife they saw. 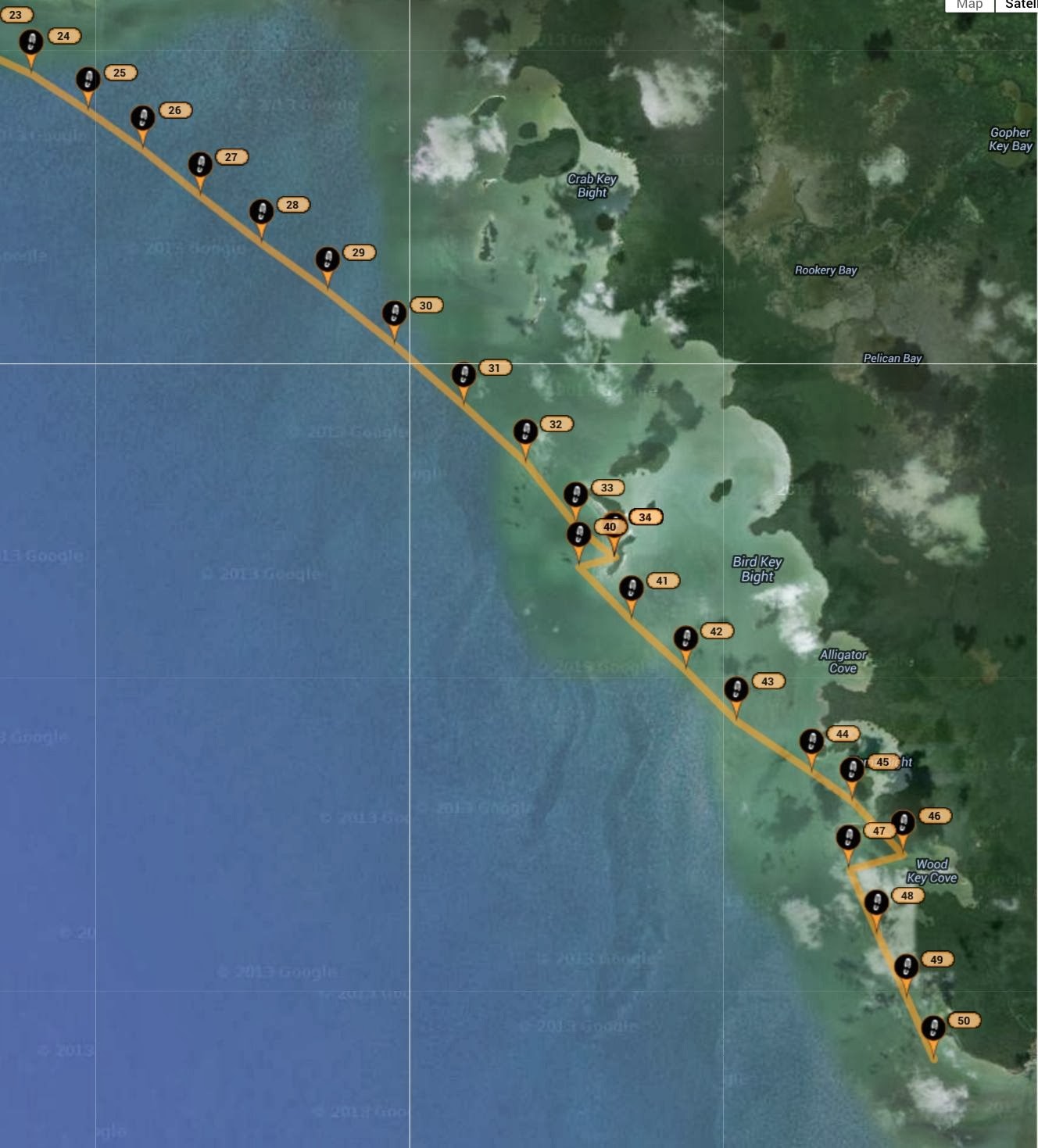 Way better than the Intracoastal Waterway

Last night around 10pm JibeTurkey started going all kinds of backwards. (Waypoint 32 to 38) I texted Wes again to see if he thought Harry had lost all sense of direction again. Wes reassured me that he hadn't been awake nearly long enough for that.

"Only if he's camping in Mobile, Alabama" texted me.

"Could the electronics be glitching?" texted Wes. "Going around a big sandbar? What's the tide? Is he past Cape Sable yet?"

I couldn't think how the GPS could generate that error. It didn't seem like one of the possible failure modes to just show him slightly off course. Then I went down the rabbit hole of trying to find tide tables for Monroe County. I finally convinced myself that low tide was around midnight.

I thought the water looked suspicious there in front of that Graveyard Creek campsite anyway. I found a really interesting Florida Department of Environmental Protection website that explained exactly what happened. They were describing a trail for people who would be coming down Graveyard Creek to the campground. This is what they say to do the day after you camp there.

At low tide, the mouth of Graveyard Creek can be a mud flat, so you may want to paddle up Graveyard Creek and wind around into Ponce De Leon Bay, where the water is deeper, allowing you to continue your journey south.

The FDEP website for the Florida Circumnavigational Saltwater Paddling Trail is really pretty cool. This area is covered in Segment Fourteen, Everglades/Florida Bay.


By the time I finished looking all that stuff up on the internet Harry's track was making sense again. At 6 minutes after midnight he sent an OK message from this unidentified little bit of land. The zoomed in image showed a lot of fallen down trees at the water's edge, likely hurricane damage. The tree skeletons were all bare and old. Since there hasn't been another hurricane lately to wash them away I guess they're still there. There's no telling though. It's just a photo taken on one particular unknown day. It's so realistic I have to keep reminding myself it's not NOW. I wonder in the dark hours if I have a better idea what danger lurks in front of Harry's boat than he does.

I went to sleep thinking I wouldn't have to wake up in the night to check the map. Our mother woke me up with a text at 7:27 in the morning to see what I had heard. Bad weather coming. I said he was camping. Then I looked at his track and called myself a liar. He'd been moving since 4 am. Then I got an OK message at 8:48 am when he came out into Whitewater Bay. 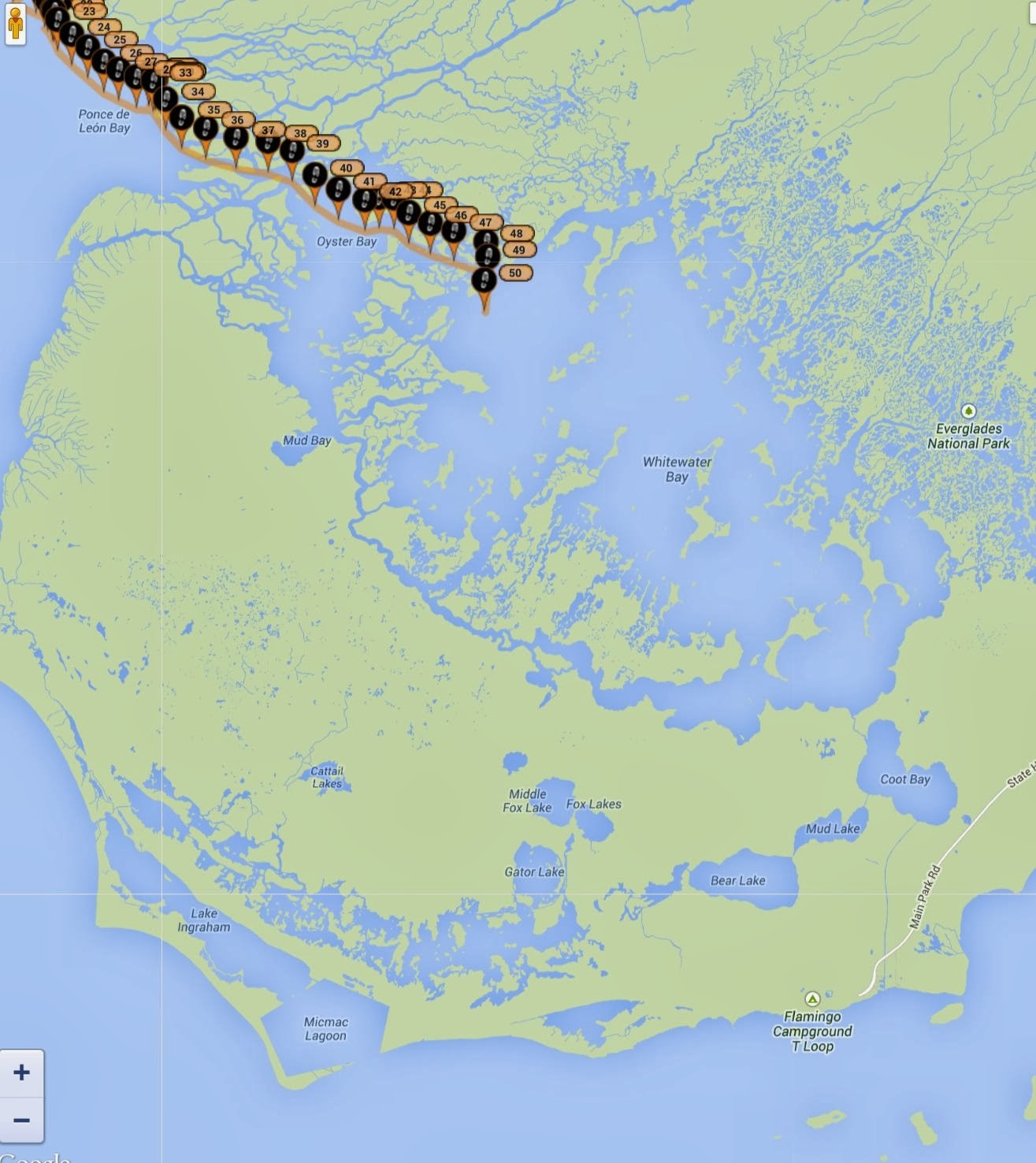 I looked at the weather forecast and saw it was complicated. It was pouring rain at my house. I was snug and smug. I got out my sound pressure level meter and checked how quiet my soundproofing job was on my metal roof. 20dB louder outside the front door than inside. 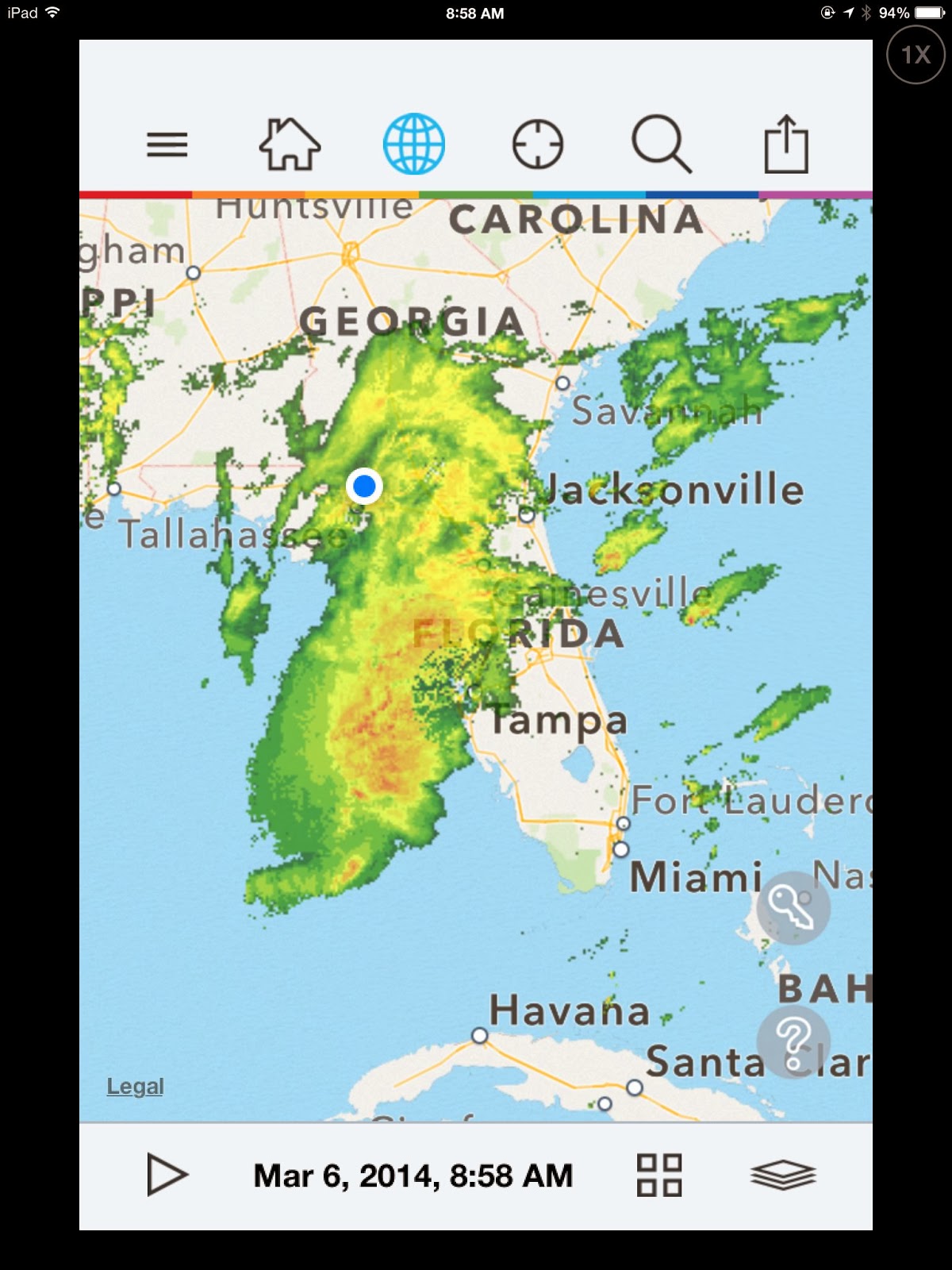 Maybe it will get the Everglades? Maybe not? At any rate, it explains why there's a south wind. That thing must be sucking all the air from down there. 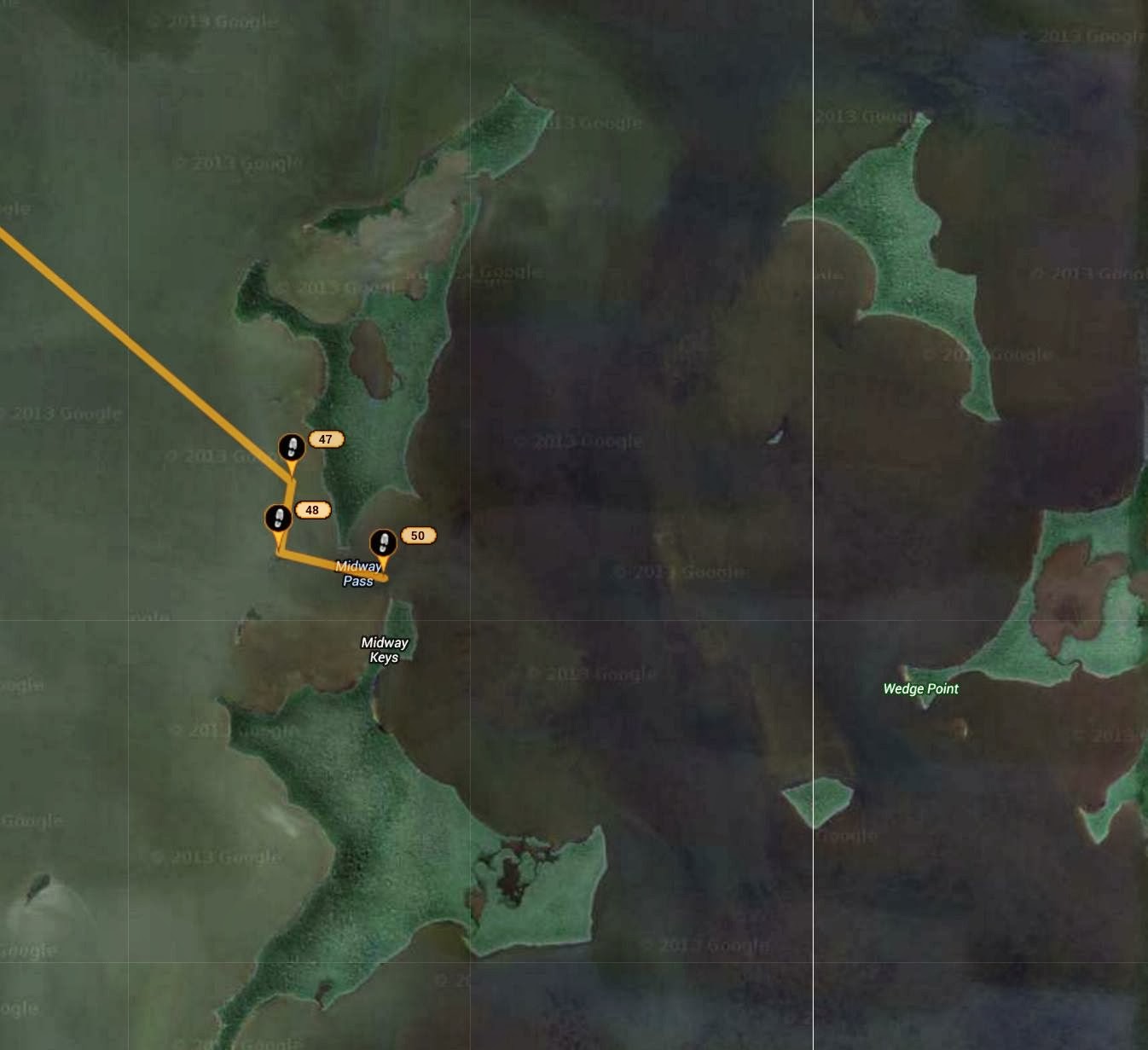 I continued to watch his progress through Whitewater Bay. He took a jog between the aptly named Midway Keys around noon.

Soon the scuttlebutt on the WaterTribe forum started to focus on the weather. About 2 pm somebody reported that the winds around Cape Sable had picked up to about 20 knots from the SSW, pretty much blowing everybody to Flamingo and the next check point.

The race manager reported that the power was out in Flamingo, and the cell tower was "knocked out." That's surprising. The cell tower at the end of my driveway is surprisingly resilient. It has never failed in any of the many hurricanes I've been through. I could always look out the window and see the light blinking on it, and hear the diesel generators when the wind and rain were quiet. I wonder how she got that post online? When my power is out I need the cell tower to reach the internet.

I got an email from Hugh Horton, the designer of the bufflehead, asking if I thought Harry knew about the weather. Should I call him on the phone? I told him there was no calling him, as the only cell tower in the Everglades wasn't working. It would have to be taller than a TV tower and as powerful to reach him that far away anyway. And it would have to be AT&T and not Verizon. I assume they are listening to the NOAA broadcast on the VHF radio. Cell phones are just not the communication of choice outside of cities.

At 2:07 pm Thursday I got an OK message from Harry on another little island in Whitewater Bay. I assume they're waiting out the storm there. 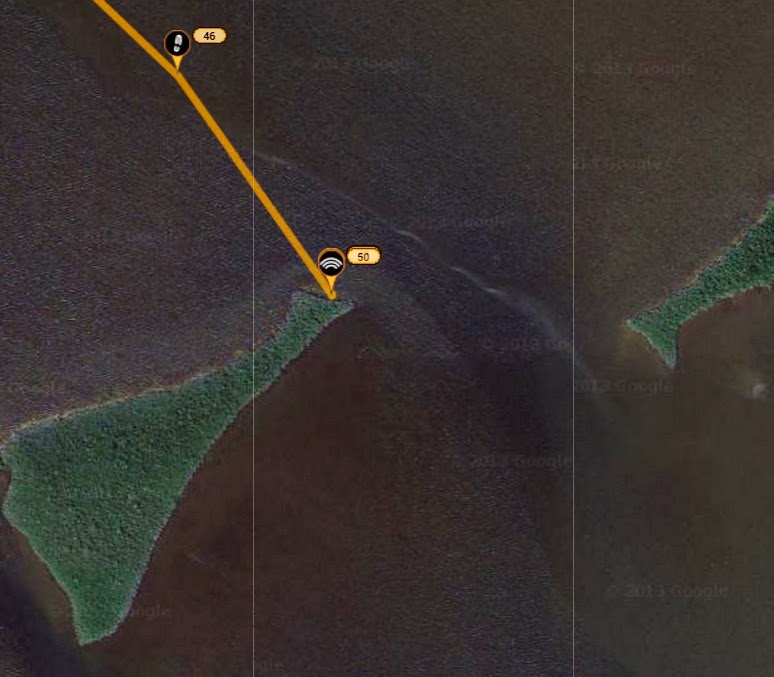 Waiting out the storm

They are pretty close to the next checkpoint.

Harry told me there's a portage involved in this event. You have to carry your boat from one concrete boat ramp to another concrete boat ramp. Nobody but another WaterTriber can help you. I don't even like to scrape my polyethylene kayak on a concrete boat ramp. I would have never let my wooden boat touch one. I guess he'll just have to take out his heavy gear and then see if somebody will carry the other end for him. His boat is so light he can easily lift it onto the roof of his car by himself, so he could carry it by himself if he had to. He said Bryan has some wheels that slide into holes in his hull that make his boat into a little cart. It's as easy as moving carry-on luggage through an airport for Bryan to make this transition.

He said it was "from the freshwater side to the saltwater side." I assumed I knew what that meant, but it took a while of studying the map to figure out it was this place at Flamingo.

Apparently when they cut in Flamingo Canal they very responsibly didn't join it to the ocean. Looks like a straight up dam in between. I guess by keeping it separate they keep more water in that boat basin, less tidal influence. I don't see how it can pass the 24 hour flushing rule for marinas though. Maybe it was grandfathered in when FDEP decided on that requirement. There's apparently an 8 ton hoist there to pick other boats up over the dam. There's a bridge across the canal. Internet says it's got a clearance of 10 ft. I'm not sure how tall their masts are. I guess they might as well lower them ahead of the bridge since it would make it less comical to carry them down the road. Maybe that's what they're doing right now while they wait for the storm, taking down their sail rigs. They could just paddle the rest of the way to Flamingo.

I found this interesting Flamingo tidbit on the FDEP site about this part of the canoe trail.

Flamingo, named in 1893 for the colorful flamingo birds that once arrived in great number from Cuba and the Bahamas, is an isolated town and was formerly only accessible by water. It is notorious for flying insect life during the warm months and early residents relied upon smoldering smudge pots inside their homes and even under baby carriages. When a scarcely passable road was built to Flamingo in 1922, one resident joked, “There were fewer people than ever at Flamingo. They had found a way to get out.”

When is it not a warm month?