I've recently finished a lot of back-breaking projects. I'm projecting forward to a hot, humid summer where chiggers and ticks are lying in wait for me if I try to do any more work outside. It's time to spend some time at the computer. The problem now is I did so much back-breaking work it causes me great pain to sit at the computer on the big blue ball I bought. I hoped it would be adequate. It is so gentle to the new floor in my lab. But it is not working. I keep putting off computer work that I want to actually do. I think I better try a real ergonomic chair.

After I decided this I went to Tallahassee to get a new timing belt in my car. I was killing time perusing Craigslist for any high quality chairs. Not a single used Steelcase, Herman Miller, or Knoll chair in the whole capital city of Florida. I looked for showrooms that would have floor models I could try before ordering a new one. You'd think all those state offices would require a ton of chairs. But Tallahassee is such a backwater wasteland there is nothing I could find open to the public. I decided I might as well stop on my way home at the furniture store across the road from my house, just in case they have something that would work. The furniture people had the same idea as the television broadcaster who put their transmission tower out by me, halfway between cities. There is nothing for 15 miles in either direction, then GIANT FURNITURE STORES! I mostly have ignored these because I have no need of furniture and I don't want to interact with salespeople.

I should have trusted my instincts.

I repressed my revulsion at the sea of poofy recliners and hideous bachelor sofas, sat in both of the desk chairs they had at the back of the store, good looking, but not ergonomic, and started hustling back to the door. I was not fast enough. The salesman stopped me. I allowed as how the chairs they had just weren't what I needed. I may have to go to Atlanta to try out the different new models of ergonomic chairs at Sam Flax.

"Oh! I'm going to Atlanta this weekend!" he said. "I'm taking my daughter to the AMFC tryouts. That's Actors and Models for Christ. It's like American Idol for church."

Oh Jesus. "I've heard of American Idol," I said, "But I've never watched it. I lived in Atlanta for 20 years and I sort of don't have much reason to go back there anymore." I may have overcompensated and said too much in my attempt to disguise my horror.

Salesmen. I know their game. "Nothing," I said.

"Really? Nothing? You should come work here!" he said enthusiastically.

"Oh, no, I don't want a job. I'm... I'm working on a book!" I blurted out. I figured it was a generic blow off, like anybody in California and their screenplay, but boy was I wrong.

"OH ARE YOU?! Let me show you something!" and he whips out a tablet computer and flips through book covers and points to a gaudy orange jacket illustration with some sort of gruesome still life and gothic lettering. "This is my book! I wrote it! It's a thriller. It's like Stephen King."

"It's certainly a... striking... cover?" I ventured. I am really rusty on small talk. I wanted to not be having a conversation with this person. "Thrillers aren't really my thing. I've never read Stephen King," I said truthfully, hoping this would get me off the hook. "I like young adult books."

"Great! My wife told me to write a children's book. I told her I couldn't do it, then proved it by writing one. Let me read you from it...."

He proceeded to go through three pages of rhyming couplets on his tablet. I was working on what I was supposed to say. It was deeply offensive to me personally. But the more he talked the less I wanted to reveal. But at the same time I felt obligated to stand up for myself.

"By concentrating really hard I think I got past the rhymes to understand what happened. You're saying that the boy was totally wrong to ask his little brother to get out of his bedroom, that wanting to be alone is a huge mistake, and that everybody needs to share their personal space or else they'll be miserable?" I said, incredulously. "That doesn't sound right to me." This was me, a hermit whose longest face-to-face conversation of the year was with her auto mechanic.

"It's important life lessons. Yes, one never wants to be alone. Let me read you another one!" and off he went. It was more tortured rhymes so bad I think I snorted out loud at least twice about a classroom where a boy was punished for expressing individual creativity instead of trying to fit in like the rest of the class. I was starting to back towards the door as I made up some other ambiguous remark about this horrifying affront to everything I stand for.

The salesman physically blocked me at the door, holding the handle and refusing to let me out while he told me about his other book, the one that everybody said had to be made into a movie. It's so long it really should be a miniseries. I can download it for Kindle. "Oh, sorry, I only have an iPad!" I crowed.

"Oh, then I'll tell you about it. It's based on time travel."

Nice. He has covered most of my hot button issues, now he's going to attack physics. Let's see what you've got, buddy. I put my heavy purse down on a console table and crossed my arms.

"It's partly in the Civil War and partly in the Gold Rush. This young man, who is 27 meets this lady who is 32 and they really hit it off, but they can't be together because she is too old for him."

I tried to do that math in my head but I was too flustered to manage it. Knowing that most of my men friends are in their late 20s or early 30s and I'm in my 40s was enough to tell me that his scenario was just way WAY out of line. While I'm counting on my fingers he jumps ahead.

"But then he time travels and when they meet up again they are the same age so they can be together," he finishes. And goes right into something about Indians and nature so convoluted and racist I just blanked out until he said the word "atheist." "So the Christian met this atheist and asked him what he would do if he went into the woods with his father and they got separated and he got lost. Couldn't he depend on what his father taught him to find his way back out again? But the atheist said, 'My father is dead,' and the Christian explains that the father is metaphorical for God and faith in God will help you find your way out of the woods. And the atheist is converted."

At this point I don't think there is a single actual thing in all of my intellect this man hasn't attacked. I'm simultaneously impressed at how thorough he was and horrified. At how thorough he was. This is RIGHT ACROSS THE ROAD FROM MY HOUSE! He gave me his card and I made my escape.

I went back into my woods with my unmarried, childless, atheist self, closed the gate and LOCKED THE CHAIN. I'm not trying to find my way out and nobody better come in, either. I binge watched Continuum, about time travel to stop corporations taking over the world (or maybe just Canada, it's not clear). There are time traveling terrorists, cops, and boy geniuses, but nobody tries to convert any atheists or rejects any women for being five years older. (The evil chemical company is called Sonmanto. I'm not kidding.) I was all alone for a solid week doing creative things with no supervision. Then my 25 year old friend came to visit and I told him about the furniture salesman. He thought it was hilarious. I still can't laugh at it. It just leaves me agape.

I was so traumatized by this event I had to wait two weeks before I could even type up the story. I still haven't dared to look in my purse for that card. I am not about to put a link to his fucking kindle book on my blog anyway. He doesn't deserve one single click. But I do have it as proof I am not making a bit of this up.

After this trauma I redoubled my efforts to secure a chair without dealing with a salesman. I found that Steelcase actually has a demo program where they will FedEx me a black chair for a 14 day trial and then FedEx will pick it up and take it back. I'm totally doing that. I already got my fabric swatches in the mail so I can pick out what color to get if the sample chair is comfortable. I'm thinking about this one. It's called Amia. That means beloved, exactly what I'm looking for in a chair. 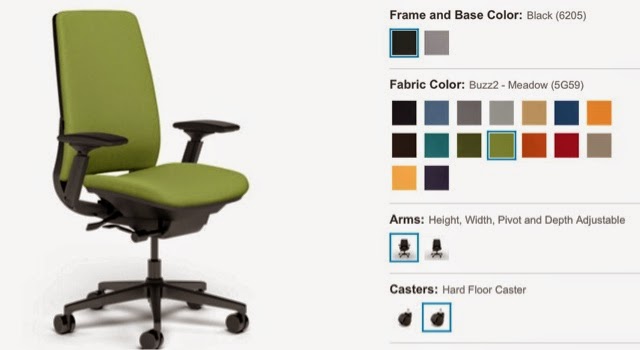