Ever since my brother did the Everglades Challenge I've been watching the nearby USGS river gage on the internet thinking I might sally forth and try kayaking by myself one day. I don't want to try it on a holiday weekend though. There might be people. So I thought I would try my own private pond just to get a feel for it. I went in the shed and got my nice double bladed paddle and a boat cushion. I thought the boat would likely be too hot to touch from the sun so I got a towel and put it in a bag with my thermos of water and my camera. I put on sunscreen, donned my water shoes, and set off down the hill. 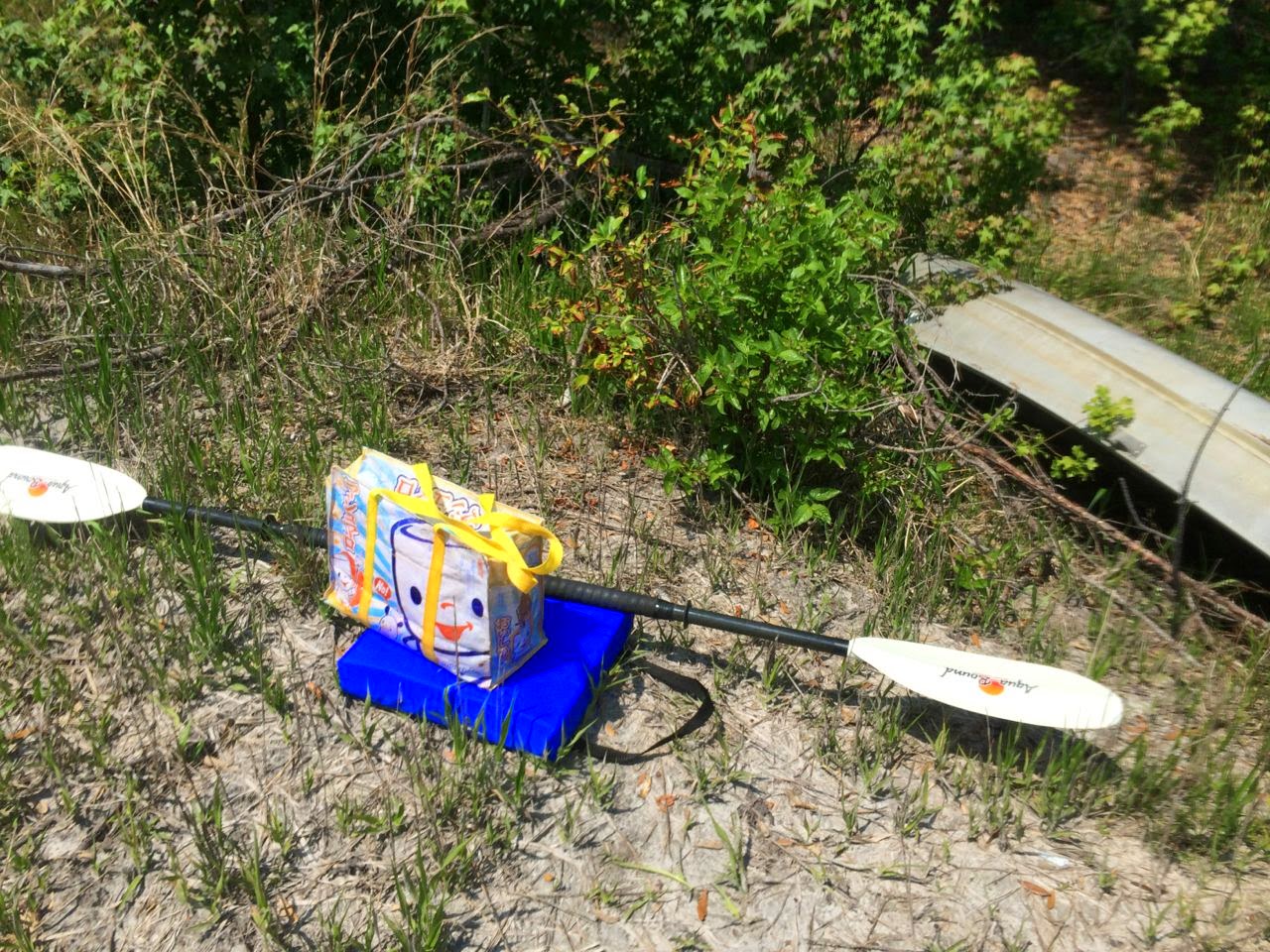 This Grumman sport boat has been leaning on this pile of dirt since 2008. Tropical Storm Fay dumped over 25 inches of rain here and the boat floated away from where my uncle left it and I spied it on the far side of the pond. I went to Walmart and bought a paddle then walked around the pond, waded out to the boat, turned it over, bailed it out, and paddled it across the pond sitting on the point of the bow and pulled it up on dry land. (I acquired a better paddle when I got a kayak later.)
By 2012 the pond was totally dry. But we have had as much rain this year already as we had in all of 2012. The pond is full. I used my towel and turned the boat over. I knocked off and threw out a lot of dirt dauber and wren's nests. Then I shoved and pushed toward the water. I was already up to my ankles in it before I looked down to see when I was going to get wet. The water was exactly air temperature I guess. I felt a little nervous I was going to disturb some creature that would startle me, like an alligator or a snake, wading through the grass with my view obscured by boat, but I didn't even see a bullfrog. By the time I got the boat floating enough to get in it I was completely red-faced from the exertion in the hot sun despite my big hat. It's 33°C today.

It was hard to get the boat to move through the large bonnets and grass. It's difficult to get up any momentum. It just wants to stop. I allowed as how I was going to the clear water to see if it was more fun to paddle there. 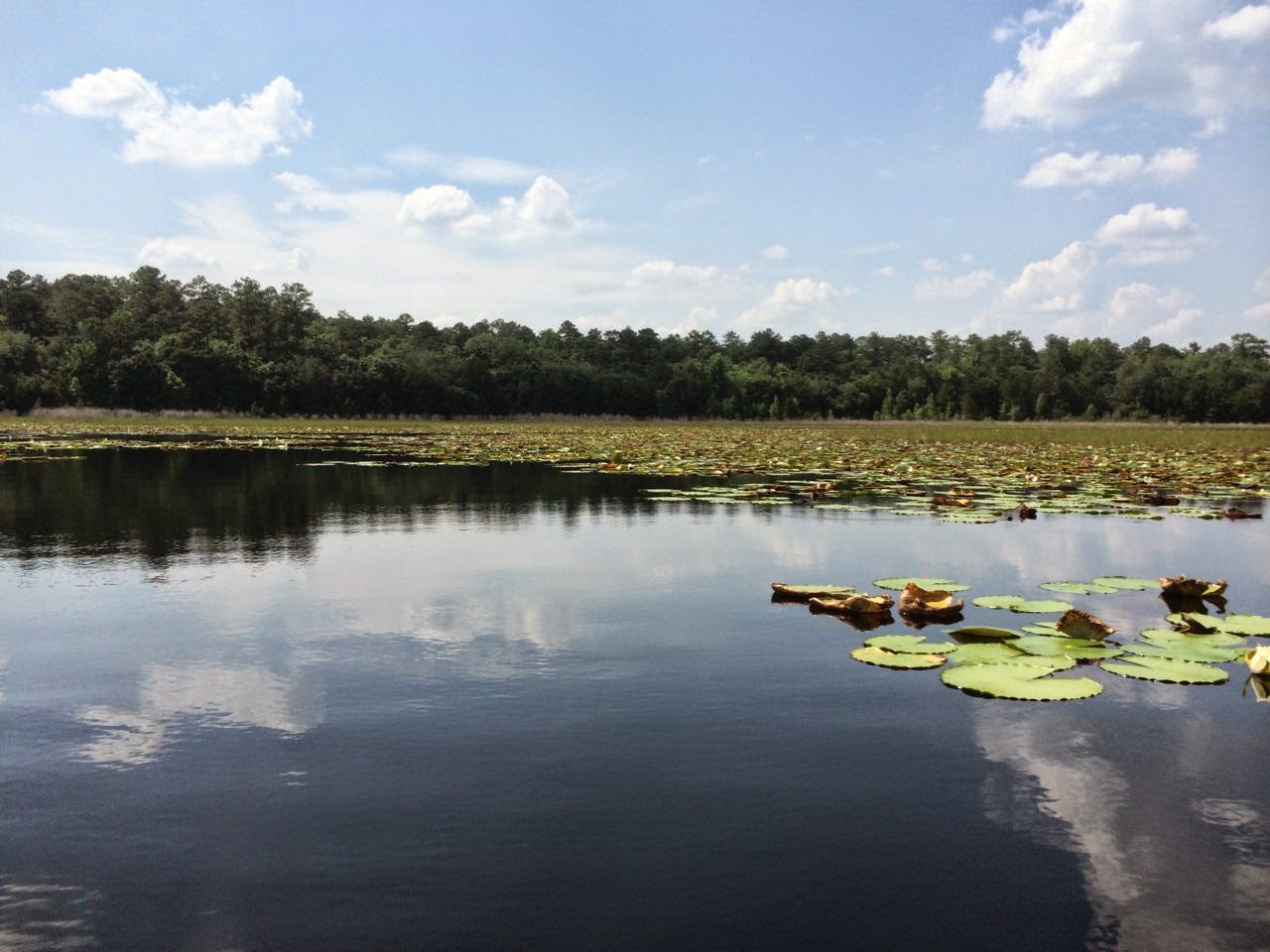 In the clear water it was still a big heavy boat, prone to blowing in the wind. I stopped and got out my thermos of water and assessed my feelings. I felt uncomfortable, nervous a bit. It wasn't interesting or remarkable compared to the view from the shore. The dark clear water was just spooky. The sun was beating down on me. I was worried I was going to get a headache from overheating. I tried to imagine if it would be fun if I was fishing for a delicious, nutritious, and free dinner. It seems unlikely there are any good eating size fish in there in less than a year of having water in it. That's scant motivation, even if I had fishing tackle. I imagined the air conditioner in my lab calling me home from up the hill. 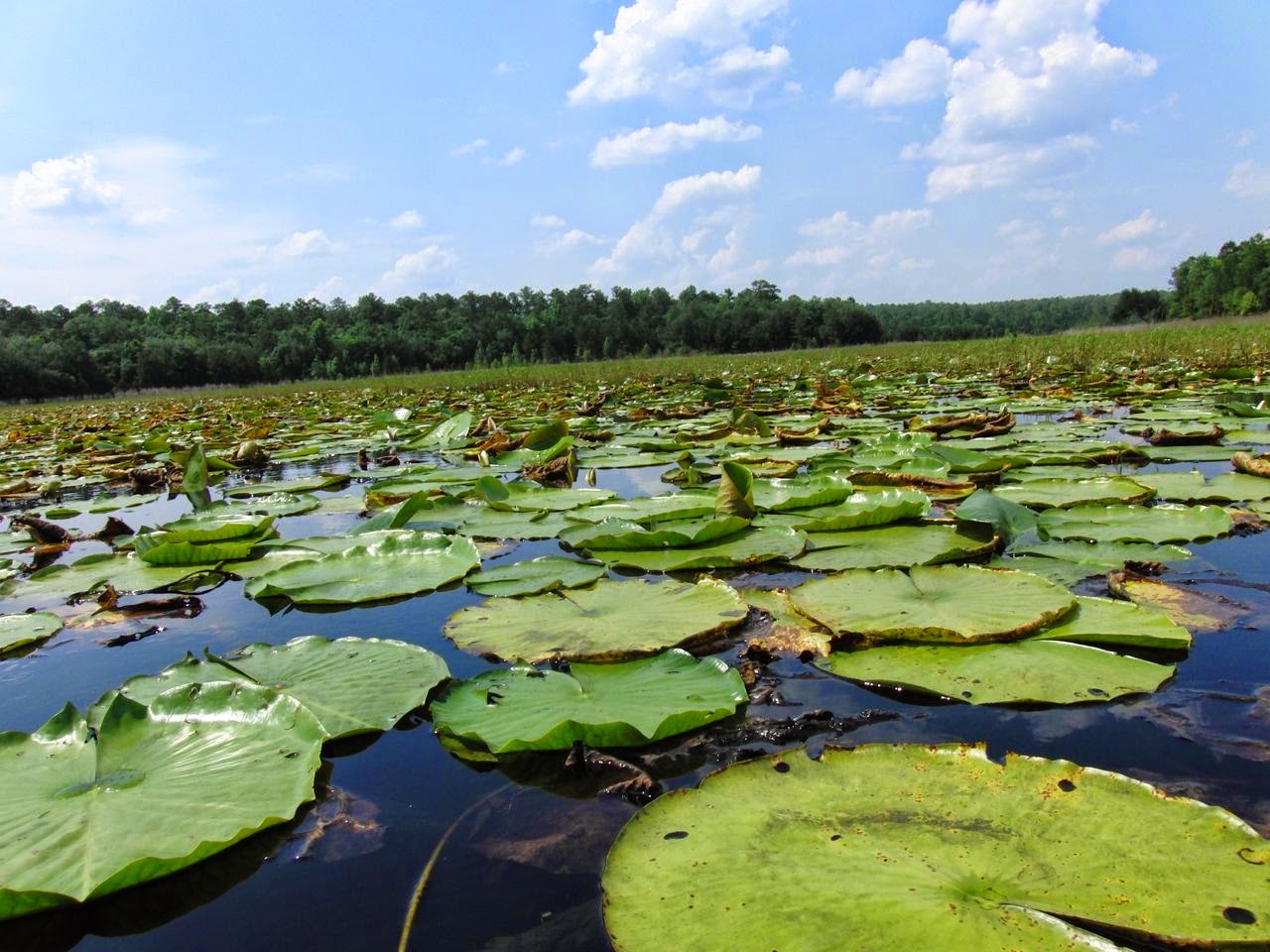 I forced my way back through the friction of the bonnets. I couldn't even take a pretty picture of the blossoms because they don't open up until night.

I got out when I approached the pile of dirt again because I don't like to use my carbon fiber paddle like a pole. I was nervous about stepping in the big alligator hole I knew was somewhere around there. I used to always check if anybody was home when the pond was dry. I managed to not fall in it. I was kind of impressed that my shoes and feet were remarkably lacking in mud. Just little bits of grass and clear water. I found myself quoting a line from the Monty Python Cheese Shop Sketch (4:32). 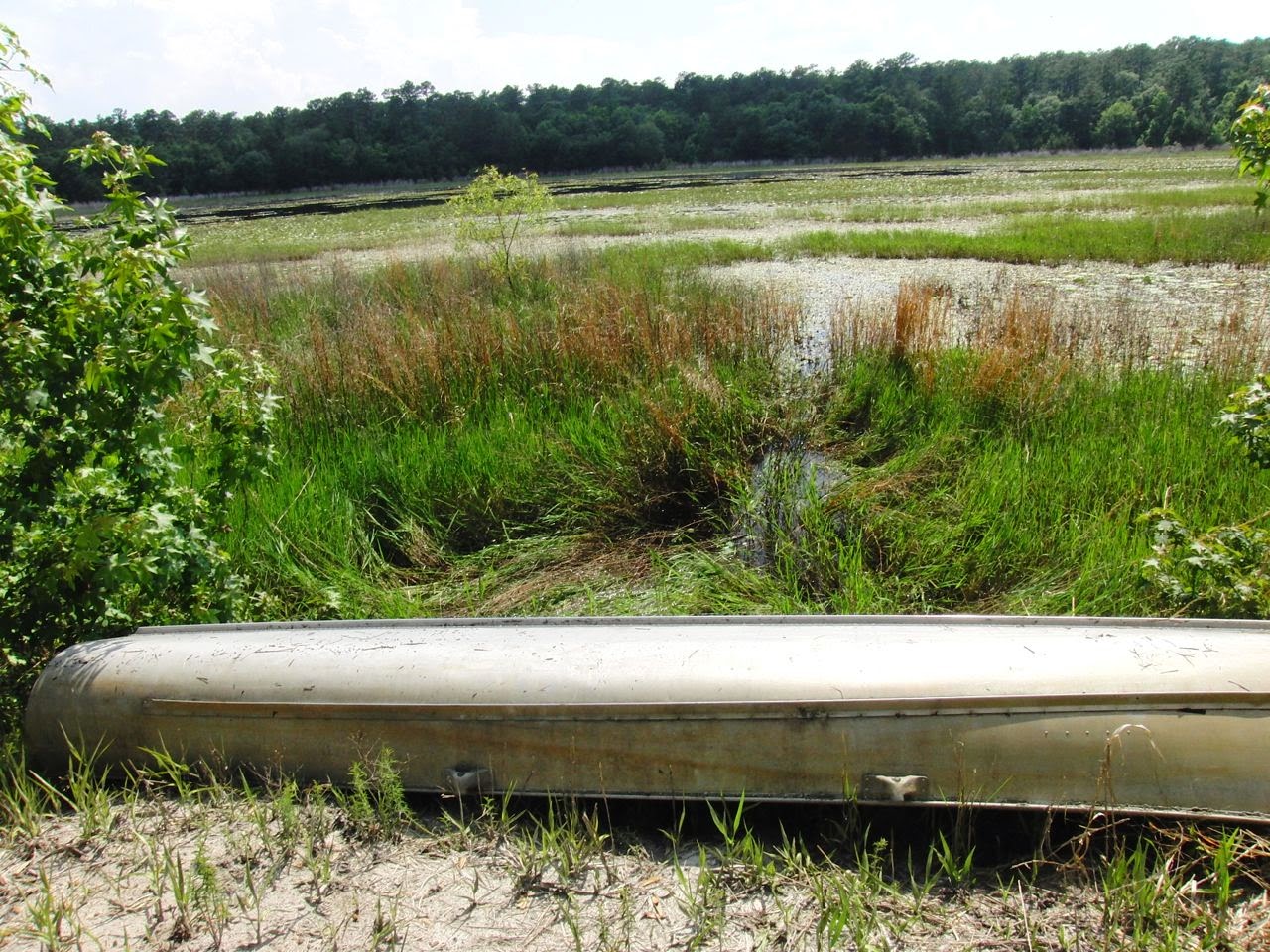 I heaved and shoved with my towel and got the boat back up on the pile of dirt, but this time on the water side near the hole that is the counterpart to the pile of dirt. The hole is the borrow pit where my dad got the fill dirt for the slab foundation of house where I grew up, which burned down when I was in high school, and is now the slab under my lab. Just goes to show this pond has been going dry and filling up again ever since somebody put that dam across the creek in the 1800s. 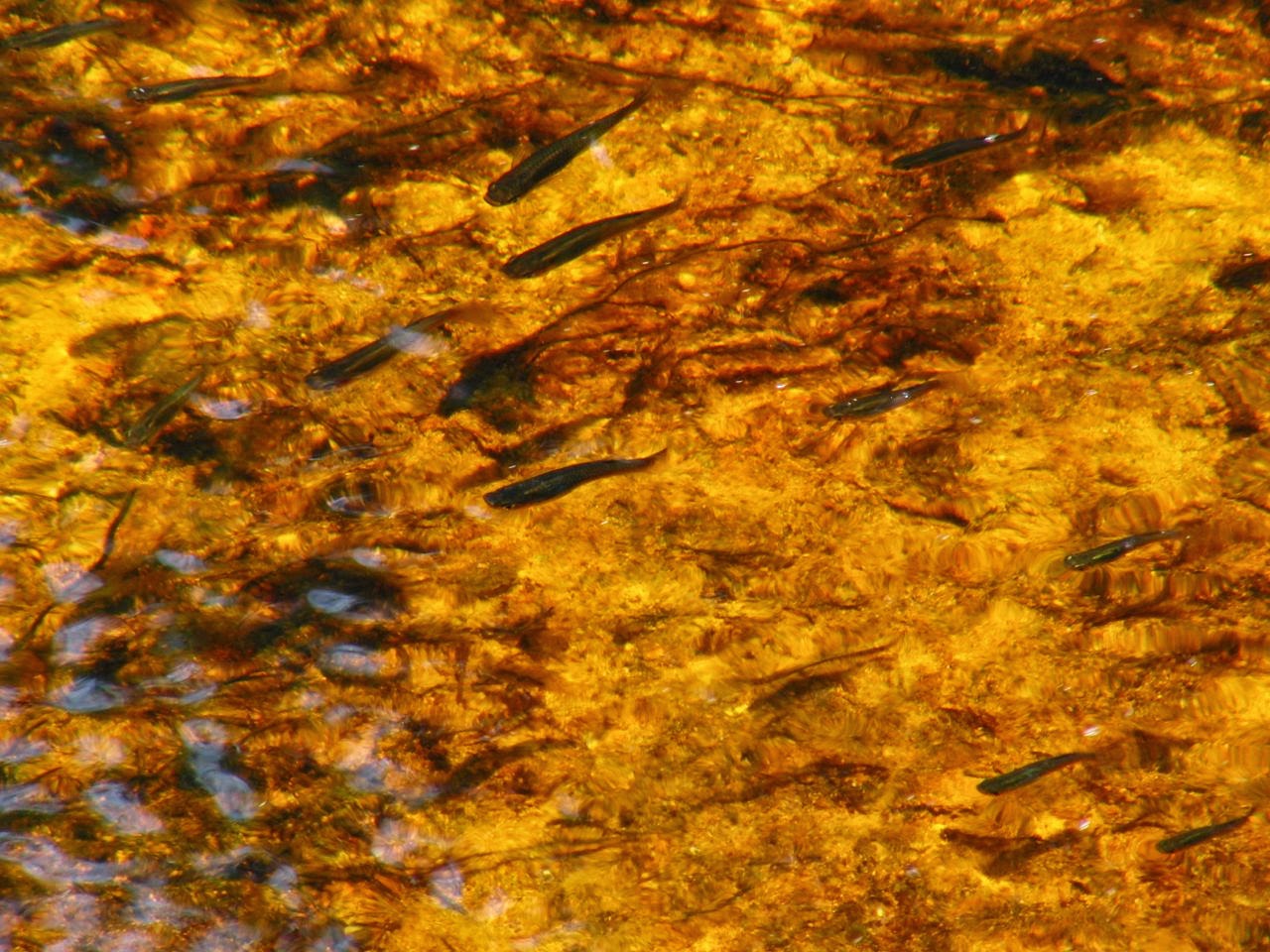 Yesterday I walked around to the spillway. I saw some gambusias swimming against the current out of the swamp behind the dam. That's some clean water.

Conclusion: I need somebody to go with me or this exercise is just work with no point. Kayaking on a river might be better because there would be shade. I would likely still have the nervous, insecure feeling though. Not sure if I want to bother with it. Should I try to sell the kayaks? If this is representative of a report about a solo boat trip is then I expect you're all hoping I do.

Here's some closing words from Douglas Adams in honor of Towel Day and my here-today-gone-tomorrow repeating pond:

Imagine a puddle waking up one morning and thinking, “This is an interesting world I find myself in — an interesting hole I find myself in — fits me rather neatly, doesn’t it? In fact it fits me staggeringly well, must have been made to have me in it!” This is such a powerful idea that as the sun rises in the sky and the air heats up and as, gradually, the puddle gets smaller and smaller, it’s still frantically hanging on to the notion that everything’s going to be alright, because this world was meant to have him in it, was built to have him in it; so the moment he disappears catches him rather by surprise. I think this may be something we need to be on the watch out for. We all know that at some point in the future the Universe will come to an end and at some other point, considerably in advance from that but still not immediately pressing, the sun will explode. We feel there’s plenty of time to worry about that, but on the other hand that’s a very dangerous thing to say.