I got some good pictures of an Eastern Fence Lizard (Sceloporus undulatus) yesterday. We call them scaleybacks, but based on searching the internet for that name I think that might just be something my family made up.

There's a photography lesson in here if you're interested. Compare these two pictures (Not retouched or adjusted, straight out of the camera). 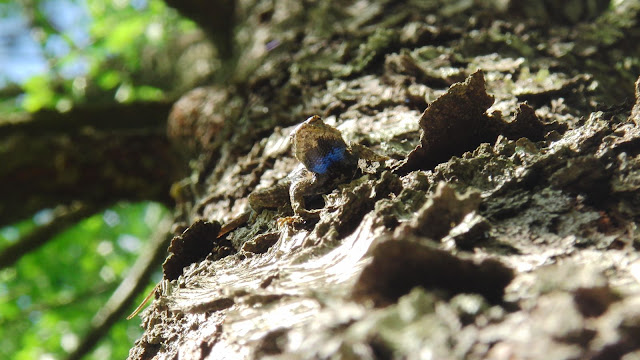 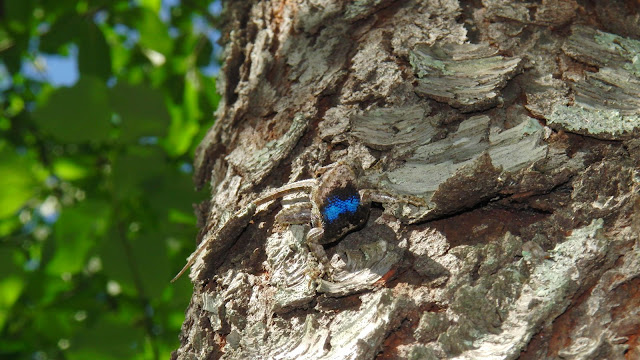 The first one is the camera on auto everything. I just aimed at the lizard on the tree. The camera chose 1/60 sec exposure with aperture 6.9. The second one I turned on the flash and aimed at a bright spot on the tree and set the exposure by holding down the shutter button. Then I reframed the shot and pushed the button all the way down to take the picture. The camera chose an aperture of 7.7. That means the little opening that lets light in is smaller. It also makes the depth of field longer. More of the picture will be in focus. (I think 1/160 sec is the standard shutter speed with the flash and nothing changes that.) Messing with the aperture is the only way to manipulate the exposure with fill flash on full auto. The flash from the camera location makes the underside of his throat extra bright but shadows still come from the direction of the sun off to the left. This trick is good for subjects that are fleet of foot because you don't have time to fool around with the manual settings. He could be gone in a second. You can't look away from a lizard long enough to find the buttons to push to do any extra stuff. Hard enough to just find the menu to turn on the flash before he gets away.
Posted by Beachton at 12:05 PM