How The Blue Man Group is like my spinster aunt 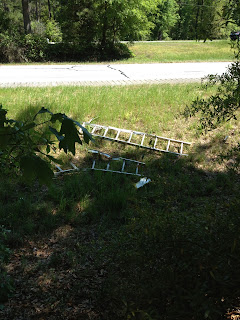 "Free ladder!" I said out loud to myself when I spied this run-over aluminum ladder in the right of way by my mailbox. I climbed across the ditch and picked it up and left it in the firelane that runs perpendicular to my driveway. Then I went on to see my dad to return his pressure washer. He told me there was a new scrap metal recycling place in town. I went by it on my way home, convenient location, and decided to take them that ladder the next day along with whatever else I could find that would be worth money. 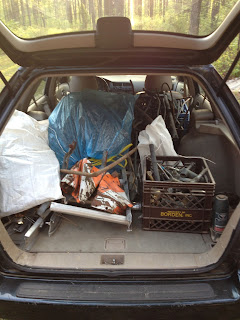 I went up the driveway in my car and got the ladder and brought it back to the shed hanging out the back. I cut it into pieces that would fit in my car with my reciprocating saw. I pulled all the pieces of plastic off it. Cut the steel rivets and removed the rubber and steel feet. Then I went through my collection of brass faucets and copper pipe, cutting the brass from the copper. I cut the steel junction boxes off all the house wire I recovered from the burned down house and loaded up the car. It took me most of the day. It was hard to let go of this stuff. The copper flashing I pulled out of the roots around the old slab was so pretty to me. The copper wire had a lovely color. I stripped the insulation off the 1/2" thick cable that I pulled out of the slab when I put up the mini-shed and thought of all the neat things that could be made from that. I was unable to stop myself from saving the handles to the sink faucet that was on my wall mounted shelf sink when I got it used from the salvage yard. I can put them on a drawer one day. But the burned up faucets from the fire and the extremely heavy but out of fashion faucet from my house in Atlanta, I could let them all go.

Well my dad would be proud. I got $276 for that stuff. I was glad I took it in when I did because starting this summer there's a new law in Georgia making it illegal to buy burned copper. I'm sure they didn't mean to punish people cleaning up burned down houses like me. I assume it has to do with the practice of burning insulation off copper wire instead of cutting it off like I did. That releases chlorine gas and is really bad. I hope they don't have a rush of people coming to the emergency room with gashes from trying to use a knife to strip wire. I used a bench vise and thick leather gloves. Most people won't bother with that.

The next day I told my aunt that I got a lot of money for my scrap metal and she got mad at me. "You sold all your art supplies?! Why! You could have just left them in the woods out of your way! You could make a lot more money selling it as art than as scrap!" I wish that were true. She is confused by the presence of art at my house. 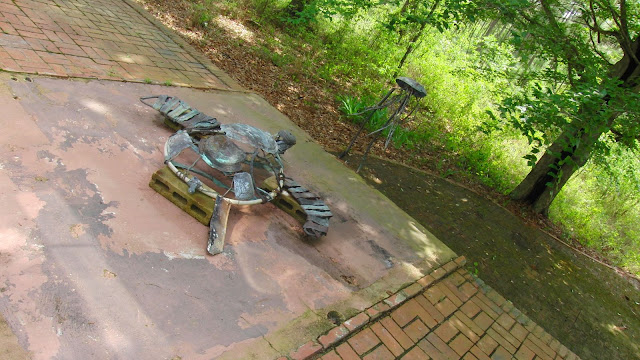 I have this really cool three-legged sea turtle and his jelly fish meal behind my Spartan on the old house slab. He's made of some scrap pipe, wire and flashing, plus some silver plated serving trays and brass light fixtures, all stuff I saved cleaning up the burned down house. What my aunt is forgetting is that I didn't make that turtle. All I did was recognize what an artist could do with that old copper and brass. 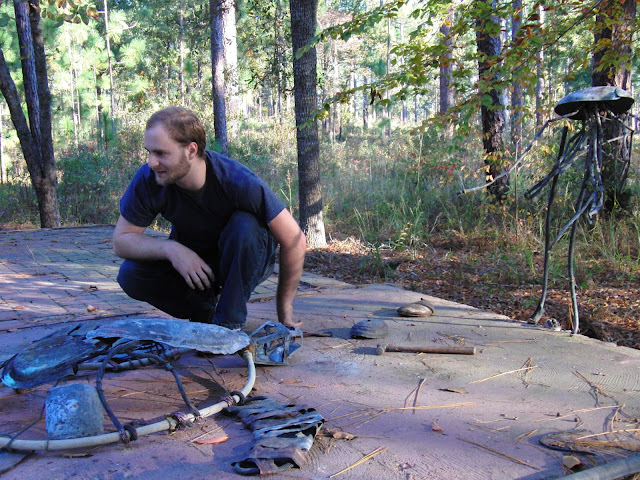 My friend Ronnie made that turtle. My contribution was just putting him up on those concrete blocks and propping his head up with a deer antler so it's easier for me to use the leaf blower on him. Ronnie only made this copper thing for me because I asked him to make if for me special. He usually works with steel. I save him all the interesting steel things I find, including the compressor out of the refrigerator I disassembled yesterday.

Sunday I read Penn Jillette's story about getting The Blue Man Group on Celebrity Apprentice. I've never seen celebrity apprentice, so I was glad he explained it.


The Celebrity Apprentice is all about watching people argue and lie while they covet money and success. Those are the artistic ideas. Donald Trump scowls and passes judgment and we all suck up and rat out to win more time on TV and get money for our charities.

No wonder he says he didn't watch the episode. Penn Jillette has an amazing ability to participate in reprehensible stuff without getting any of it on him. I admire the hell out of him for that.

Anyway, the story is about art. But Celebrity Apprentice is about money. Penn decides to ask his friends The Blue Man Group to give some money to his charity.


After weeks of sitting on "boardroom" sets pretending to do business, I really wanted something beautiful.

"Can you deliver the money in a fun way?" I asked them.

That was the problem. In the Blue Man world, money doesn't exist. For the Blue Man money means nothing. The values that they've established in their art don't include avarice. The Blue Men donate tons of money out of the blue make-up, but in it, well, they're not above money, but they're beside it. It doesn't exist. They asked me to give them some time to think of something beautiful. A couple days later they sent me a video of them filling a balloon with tens of thousands of dollars in tens and blowing it up with a leaf blower. It was beautiful and it delivered money, without the Blue Men having to respect it. It was so beautiful.

Penn describes the scene as it played out with a parade in the park. You really should read the whole story. It culminates with the final tally in the boardroom with Donald Trump and Clay Aiken, who was furious that the attempt at art had compromised his goal of getting the most money.

Now I'll be honest with you. The idea of loud leaf blowers and money blowing around and people scrambling to grab it makes me squirm. I would not like that. But I get what it is about it that made Penn cry. But that last sentence in that block quote? That is art to me. We all have our art form. Blue Man Group and Teller are silent and use props. Penn Jillette uses words, and he uses them well.

My art form is dwellings, repurposed objects, things that had a job and now have a different job. I'm a painter, but the kind that's really good at cutting in, not making five swipes of a sable brush look like a bird. My talent is looking at something and seeing the potential. I hope I can strike a balance between my dad and my aunt, between Donald Trump and the Blue Man Group. Selling art is so much harder than making art. But they make it so easy to sell scrap metal.
Posted by Beachton at 4:24 PM