Hard to be pretty 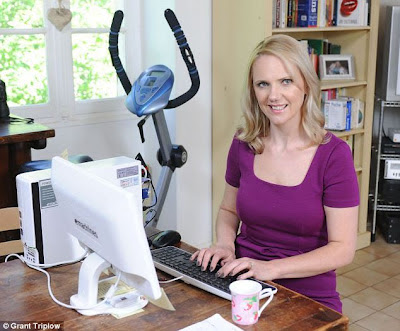 There's a Daily Mail article making the rounds on the internet today. Samantha Brick is explaining how hard it is to be pretty because men are always buying her things and women hate her. The article is full of pictures of her to "reinforce" her point.

I don't get it. None of that stuff has ever happened to me. I guess I'm not as pretty as Samantha Brick. But I have it on good authority from a small sampling of men who happened to be online this morning that she's kinda funny looking. (That's why I put "reinforce" in quotation marks. It's like the pictures are there just to make us realize she's not that pretty at all, which makes the article seem weird and a bit off.)

So I have a couple of other hypotheses. How you are treated is not as much about how you look as how you act. If you wear nail polish and a dress and do girly things like use an exercise machine to keep slim instead of dragging General Motors refrigerators out of aluminum trailers by yourself men will treat you like a lady.

I've kind of always had a hard time enjoying spending time in public. Nobody ever tries to be friendly to me. When I was in my early 20s and went to bars with my college friends nobody ever tried to pick me up. I figured I was emitting that go-away vibe that came from spending all that time at Georgia Tech. Nobody wants to talk to you because they are afraid you'll say "thermodynamically irreversible" at them. There was a TV show back in the 90s where they did an experiment with a girl wearing different wigs, blonde and brown. It showed how men treated the woman differently at a bar. When she was blonde they stared at her but that was it. With brown hair they went up and talked to her. I once got a red Cher wig at the costume shop and wore it out to the bars with my friends. Random men just came right to me! "I just love red-heads! I just had to say Hi!" they would say. Then walk away. It was bizarre. It got hot and I took the wig off as the night wore on. My real red-headed friend Patrick stuck it down his shirt and let the ends peek out. He didn't have as much luck with the red chest hair, but it was sure funny to me.

A few years later I actually dyed my hair brown and went to the bar to test that out. I got hit on A LOT. It was quite gross. A guy who rode to the bar on his bicycle because he had a DUI tried to get me to give him a ride home. He volunteered all this information, like having a DUI wouldn't make me think he was reprehensible. He was also rather fat and sloppy. I decided that with blonde hair, looking exactly like Princess Di, men felt like I was out of their league and they would leave me alone. Of course it could also be any number of other factors, like I am clearly having a bad time. Who wants to talk to somebody that grumpy? It's just that most people in bars talk about the most asinine and crass stuff. They tell racist jokes and expect you to bow to peer pressure. They get mad at you if you talk about something like how to convert a bathtub enclosure into a subwoofer. They just want to gossip about other people and complain about their diet.

I think I have qualities only appreciated by a very few people. I got this in an email this morning from my artist friend who is doing a commissioned piece for a marketing firm (a graphic logo of an implausibly shaped character turned into wood, pipe, and paint):


I don't care how much they're physically more attractive or whatever, the dippy yuppy asian chick from the marketing firm and the derpy yuppy white chick from their customer are both losing 30/10 attractive points over you for being too stupid to realize you can make something that looks bad look good with good knowledge of how to work materials and knowledge of material science. Meanwhile you're debating the merits of having someone help you drive aircraft rivets vs using pop rivets and scrapping vs repurposing old refrigerators. Those two bimbos would be lucky to hang a wind chime without having it catch fire.

I think the men buying Samantha Brick bottles of champagne would find it adorable if her IKEA bookshelf collapsed under the weight of her framed pictures of herself.

Anyway, Samantha Brick, congratulations on having people give you special treatment. Too bad about women being jealous of you. I'm glad you have it all figured out, because I sure don't.

*Update* Wed April 4 I guess a lot of people weren't just puzzled by Samantha Brick's kind of naive interpretation of her own lot in life like me, they were downright incensed. She published a follow up.


While I've been shocked and hurt by the global condemnation, I have just this to say: my detractors have simply proved my point. Their level of anger only underlines that no one in this world is more reviled than a pretty woman.

With even more pictures of herself. Seriously, what are all these pictures doing there? The one of her in a purple dress and her husband all in camo holding a gun?! WTF? Her own publisher is mocking her. I hope this is a lesson to other women who are way too into pictures of themselves. I know a few. Just like I don't flaunt that I'm an atheist you might want to keep it a secret that you are in love with pictures of yourself. It's great you don't want to be a hypocrite and you want to be true to your personality, but it is really going to make people uncomfortable. I understand I'm unusual. I don't like pictures of ANY people, especially myself. I watch cop TV shows. In every episode they pick up a framed picture off a shelf at a crime scene and pick out which of the victim's relatives killed them. That's why I have two pictures of people in my house and one dog, and they are all dead already.

Yesterday some people asked me, "Who is Samantha Black?" So I googled her and found her website. Each tab has a different picture of her with a description of herself in the third person. She was a TV producer in the UK responsible for people like Russell Brand, then that business flopped around 2007 so she married a French carpenter and left London for France to try to be the blonde Peter Mayle.

She is clearly struggling to find herself. She is clinging to the simple explanation that everybody hates her because she's pretty because it leaves intact the part of her personality she values most. She isn't really a master of subtlety and nuance -- Russell Brand. The difference between appearing easy and appearing pretty is lost on her. She has relied on social reinforcement of her value for so long she doesn't know how to deal with the loss of it. I kind of applaud her attempt to regain the melodrama she craves by writing this story. She may have given herself the kick she needed to withdraw from her old community in media. Hopefully she will spin herself a cocoon of delusion there in France with a small community of her husband's dirty-old-man friends leering at her  daily to make her feel good about herself through old age. France is a great place to look easy at eighty.

Lindy West at Jezebel also got the feeling that the Daily Mail was messing with Samantha Black. She accuses them point blank of trolling. I think she's right and I feel bad for any additional traffic I might have given their site.
Posted by Beachton at 12:41 PM