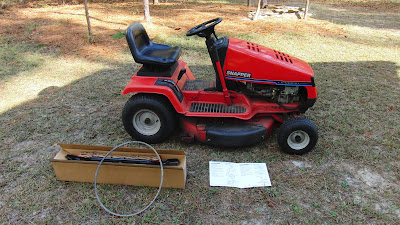 I worked on two similar yet very different machines this weekend. I prepared for them the same way — ordering things online and studying the instructions. I got a new mower belt and blade from Miami, Florida and a new hard drive and portable enclosure from Whittier, California.

The idea for the new hard drive is to make my computer faster and more responsive. Also I needed more space already. The mower, well it was just honestly worn out. When I first fired it up after being gone for 10 months it made an inappropriate smell, like belts burning. I tried adjusting the tension but that just made it fly right to pieces. I figured as long as I was ordering parts I might as well get a new blade too since the old one felt out of balance. There was a lot of it missing after all. 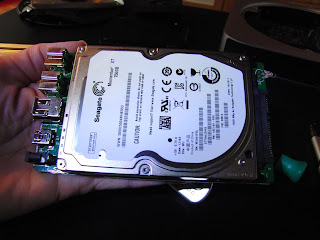 Saturday morning I put the new hard drive in the enclosure and set about figuring out how to get the old hard drive duplicated on it. Because it was sort of hard to find specific, good instructions I'm going to put it down here for reference. Most of the forums said to download software to clone drives, like Super Duper or Carbon Copy. I just couldn't believe Apple wouldn't have a plan for doing this within their OS. Well they do. Here's how.

1. Use Disk Utility to format the new drive Mac OS Extended (Journaled)
2. Use Disk Utility to make 2 Partitions, a 1 GB one (Restore) and the rest (Main)
3. Restart the machine in Restore Mode. Hold down Command R while it boots. (I couldn't make this work with a Bluetooth keyboard. I plugged in a USB keyboard and it worked fine.) Now your computer is running off a 1GB partition on the main hard drive meaning you can do stuff with the remainder, like clone it.
4. Open Disk Utilities from the Restoration screen (a nice gray linen background with not many choices.)
5. Select the Macintosh HD and go to the Restore tab. Drag your Main partition of the new hard drive to the Destination: field. Click the Restore button.
6. After the 6 hours (or however long it takes) to copy your hard drive, reboot the computer to the main hard drive like it normally does.
7. Download the Restoration Disk Assistant from Apple.
8. Run it and select that "Restore" partition you made on the new hard drive as where you want to create the disk. This only works with USB connections. I used Firewire 800 to copy the hard drive. I had to eject the disk and plug it in again with a USB cable to do this step. This only takes a minute. After it's done the 1GB partition you made will be invisible. It now looks like you have two identical Macintosh HDs, only one of them is on USB. And it doesn't have that new download on it.
9. I went to System Preferences and changed my startup drive to the external one just to test it. It worked fine. 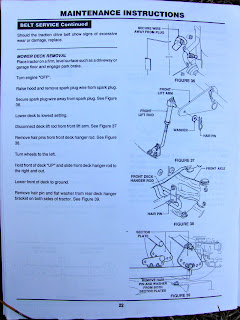 Between 5. and 6. I worked on the mower. Unlike Apple, Snapper has an excellent Maintenance Manual. I didn't have to do any research on the internet to start work on the mower. I just had to get up my nerve. I really don't like working on machinery. I always hurt myself. But you can't be a hermit if you can't fix your own damn mower, so I had to do it.

I took a look at the old belt sticking out from under the mower compared to the new one. Yeah, that's destroyed. I don't know how these things are made. It's very strange looking to me. Is it covered in Kevlar? That's pretty cool. 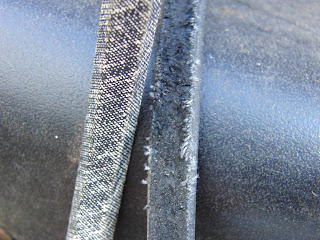 The first step was to take the mower deck off. I've done that before to take the blade off. It's mostly just pulling out cotter pins and dragging heavy parts around in the right order. I didn't really run into any trouble until I got to the part that said "Remove deck belt idler pulley. See Figure 47" Well it ain't LEGO. How exactly? After many exploratory trips to the shed to try to find a better ratchet handle and resorting to a length of pipe and an ill-fitting metric wrench to hold the nut on the bottom I got the bolt out of the pulley. My hands were throbbing from wrenching on tools already. I was wearing my leather gloves, but maybe I should have put my gel padded bicycle gloves under them. 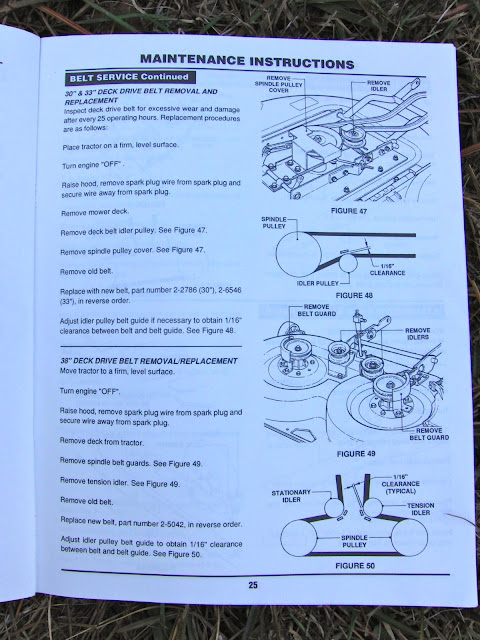 The belt guard came off with the pulley and I saw what was probably the source of the belt smell. 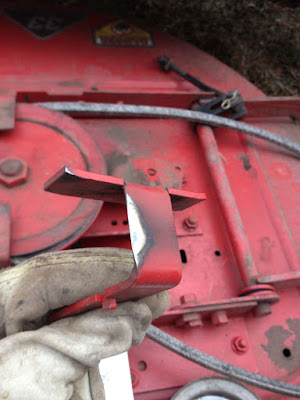 The belt on the outside of the belt guard must have been rubbing on there. It's sharpened down to a knife edge. It was a little bit bent and bound the pulley too. I straightened it out in the vise. When I put it back together I tried to figure out how to adjust things so it has enough clearance. I took off a part of the tension adjustment that was also bent and straightened that as well. It bent again though when I tested the on and off positions for the blade. I don't really know how to tell what it's doing without the belt actually moving. There's no way I'm sticking my face down between the drive belt and the blade belt with the mower running. Also I can't, because there's a safety switch that shuts it off if your ass comes out of the seat. But what I could do is hold my iPhone down there on my monopod and shoot some video. I ordered a doo-hickey to let me attach the phone to the monopod. It shipped today.

I knew I had a socket and breaker bar to fit the bolts that hold the blade on. No problem getting the old one off and the new one on. I just had to guess at 90 foot pounds of torque. I turned it as hard as I could. It was interesting to me to compare the new blade and the old one. Where did all that metal go? Is there a little bit on every blade of grass? A large bit in the small trees I keep mowing? I got a straight blade a few years ago for mowing small trees but I swapped it back out again for the Ninja blade. I don't like the shooting out the side business. It mostly just blows back on me. The Ninja blade is my favorite. It got dark and I couldn't take more pictures. I got the mower back together and put it away in the shed and still had several hours of disk copying to go.

Sunday I opened up the mini to swap the hard drives. The new one is a Seagate Momentus XT Hybrid. It's a 750 GB 7200 rpm drive with a 32 MB cache. It has start-up speed similar to a solid state drive with the affordable capacity of a mechanical drive. It also has the SATA 6Gb/s interface, which is what my mini is designed to support. However the drive that's actually in my mini is a 500 GB 5400 rpm 3Gb/s model — basically the straight blade. I want the Ninja blade! I don't want to just throw the data out the side, I want to whirl it around a lot. My main problems are with iTunes, iPhoto, and iMovie. These all access large libraries of data. My iPhoto library is currently 231 GB. 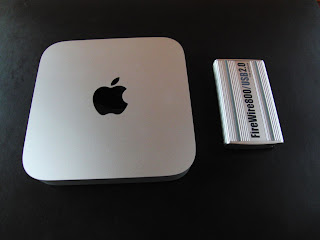 So here's where I started. A mini and an external drive. The new minis are a lot easier to take apart than the one I have up in the loft. No putty knife required.
It's a lot like opening the valve box under my house to turn the water off and on. 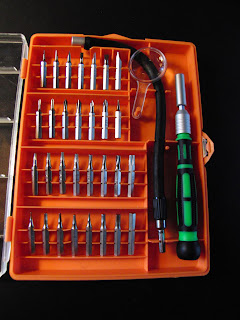 I would say the mini job was definitely more enjoyable than the lawnmower job. I think it's just because I have a lot more experience with the kind of things that go in a computer. Also because my sensitive hands are fine with fiddling with delicate things but I cuss a blue streak when a 3/4" socket slips and I bang my wrist hard on a hard steel angle. Also I don't have a cohesive set of mechanics tools. I just have an assortment that people have left behind in my garage. (Thanks for that breaker bar, Chris! And all those giant sockets, E!)

Tiny screwdrivers I have though. I got this set from Harbor Freight for some trivial amount of money when I had to take a lot of hard drives apart. (To be sure the data was destroyed.) It had everything I needed for this project with one exception. If you get one you might want to check that they don't leave out the one size you need the most. I had to use the T-5 for the T-6 holes. One was stubborn. When I rounded off the hole in the screw I switched to a hex bit that loosened the screw just fine. 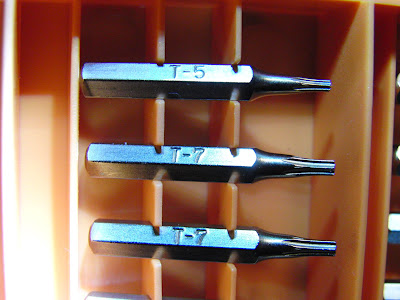 I'm real nervous doing anything in a modern computer that makes metal shavings though. A bit of conductive trash the size of a gnat's whisker could short something out in this thing. The components are freakishly tiny. I would really like to see the techniques they use to assemble computers now. My hands probably look like a pro basketball players' next to the ones of the people who assemble these for a living.
My main static precaution was doing this on a damp day. It was over 80% humidity, on the verge of rain. No problem.

After I got the mini back together I put the old drive in the external enclosure. I was thinking I'd put it in my other mini that only has an 80 GB drive. Then I realized I can just set it to be the boot drive over Firewire. Good way to test how Lion works on a Core 2 Duo. Works fine! Now I can delete the iPhoto library off that drive and have a lot of room for stuff I can watch on TV in bed! And I don't have to lament not having a T-6 screwdriver again.

I actually kind of like that 9.5mm drive enclosure. It's a lot better than I thought it would be. It came with cables for Firewire 400, Firewire 800 and USB. I used all of them yesterday. Not that I didn't already have some, but it was nice to not have to go looking for them in plastic bins.

Before I swapped the drives out I timed some things. Then I did it again with the new drive. The hybrid drive is supposed to get faster the more times you do stuff because it figures out what to put in the solid state memory part.

That's better than twice as fast. I think that will be a noticeable improvement.

I recognize a great deal of irony in this. I'm unhappy with technology that is not as fast as it can be, yet my whole mission in life these days is to take as long as possible to do things. I've been perfecting the accurate disassembly of calamondins, a sour orange fruit. I spent so much time making marmalade the other day I figured out it came to over an hour per jar. But that's another blog topic.
Posted by Beachton at 11:21 PM