If you think of something you think is awesome there is a very good chance somebody else already thought of it. First step when you think you have a new invention is to look it up. It's called Prior Art in the patent biz. And it's FUCKING COMMON SENSE! There are 7 billion people in the world. If you have a one in a million idea then 7000 people had the same idea. Get a load of this press release from NC State. They modified this baby seat and did some ergonomic research on it and released “Comparison of infant car seat grip orientations and lift strategies” 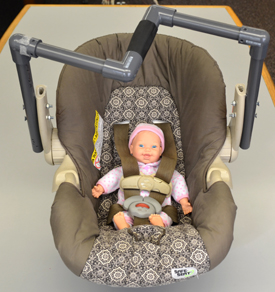 This made me all ranty. Why is an engineering school using this embarrassing PVC pipe mockup of a better car seat handle when THIS ALREADY EXISTS IN THE REAL WORLD? I don't know a thing about babies. I don't have one, don't have any close friends with one, nothing. But I am alive and observant and I just know I've seen one of these and thought, "Oh, that's a good idea." In under 10 seconds of searching I found this one. 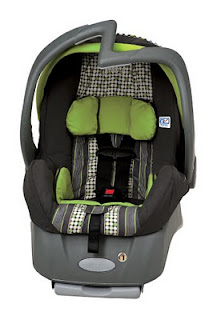 Now come on NC State. Couldn't you have sprung for a model already on the market and compared those? I'm pretty sure that obscene franken-handle with the exposed bolt threads did nothing to decrease the weight. You couldn't get a doll that looked embarrassed to put in there? At least one pretending to be asleep so her friends don't see her in that thing.
I actually used to do some consulting for a mechanical design company back when I was professionally viable. They had a client that made baby stuff in China to sell at Walmart. They had me do some sewing work on a prototype baby bathtub that was a sort of hammock framed thing. Our main objective for the design was that it be stackable. Walmart wanted to optimize shelf space. I don't think these seats are stackable at all. Might not be a Walmart type product. Still, of all the things that can make a car seat more fancy and expensive I think putting a little kink in the molded plastic handle is pretty cheap. I hope it catches on. I'm not going to depend on NC State to drive innovation though.
Posted by Beachton at 4:45 PM