Radiosonde in the Pond

Today I did my last heinous chore before I can go full hermit -- got a new drivers license and car tag. Out here in the country that involves going to the county seat of two different counties. On the way back I passed a boat ramp on the local tributary of the Gulf of Mexico so I stopped to see how low the water is. Very low. I made a mental note that I need to go back with a trash bag and some gloves so I can clean up around there, then I realized I was going to need more than that to get the washing machine and bed somebody had dumped in the river. This is one of the things that makes me so uncomfortable with this society. I really don't want to know anybody who would throw a washing machine and a bed in a river. 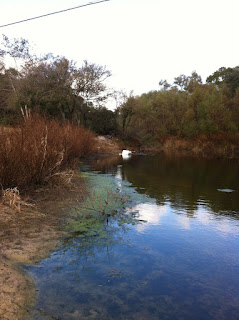 When I got home I decided to walk to the pond down the hill from my house to see if I could catch some gambusias (Gambusia holbrooki, aka mosquitofish) to put in my birdbathtub. I couldn't get close enough to the water's edge because the bottom of the pond is a very spongey mat supported by water lily roots. But the closer I got the more water came up around my feet so I decided to try again wearing my shrimp boots.

As I was walking back I saw a piece of trash. Here?! There is no trash in our pond! It's entirely contained on our property. So I went to pick it up to carry it back in my empty bucket. It was a waterproof envelope. How'd that get in the pond? I imagined loose paperwork flying out of a forestry service helicopter. But it was better. 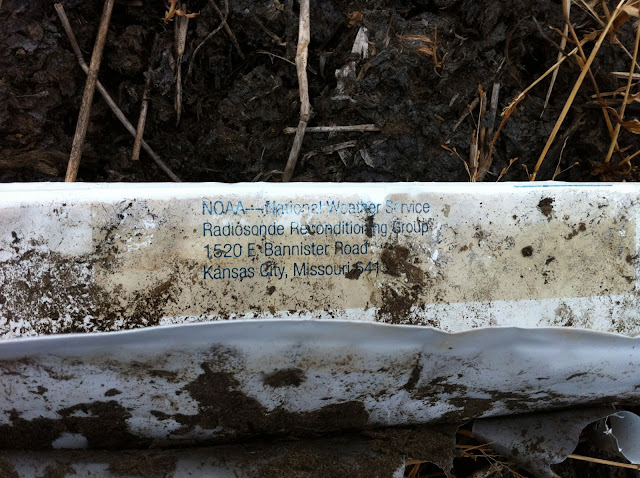 NOAA is dropping their mail in my pond? I must have still been impaired from the fugue state I put myself in during the hour and a half wait at the drivers license office where 30 people were talking loudly to each other, their cell phones, and their babies. What is this envelope doing here of all places? In a dried-up pond? 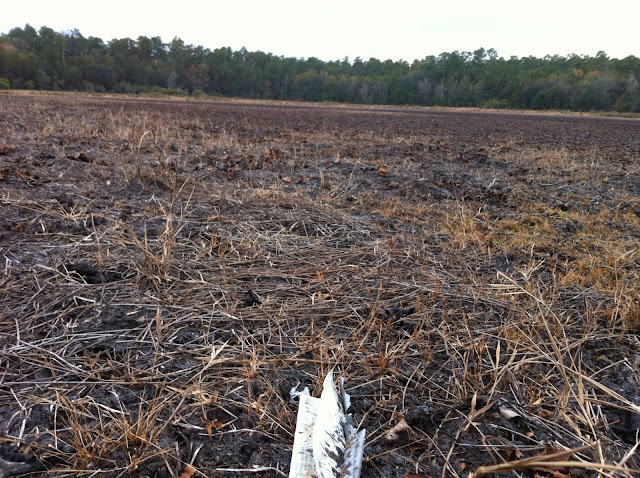 I pondered this while I took a few more steps and then I found what I assumed was the remains of a radiosonde. 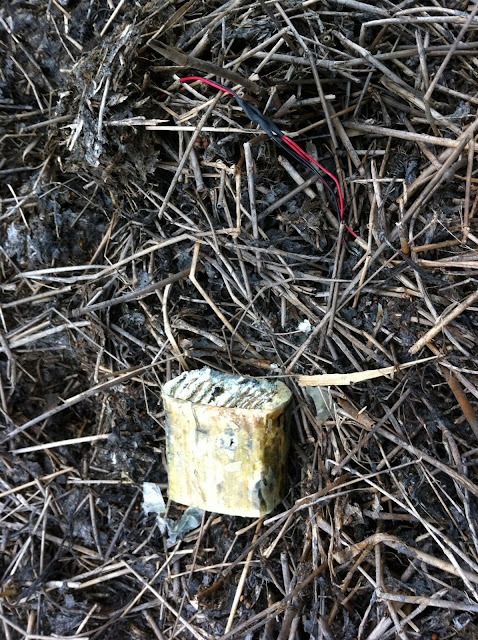 The configuration of this lump of corrosion separated by sheets of something non-corrosive leads me to believe it used to be a capacitor/battery. The wire harness next to it looked pristine though. I picked it up and put it in the bucket and then got distracted by a phone call. An hour or so later I started thinking about it again and realized I should look to see if there was anything IN the envelope. No, but there was something written on the outside once I unfolded it all the way. 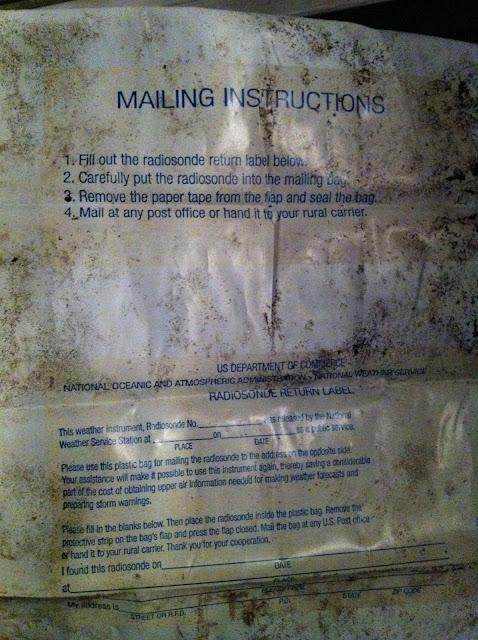 Oh, I get it. They attach the envelope to the radiosonde when they release it so if you find it you can send it back. I'm pretty sure they can't recondition this one. It's interesting that the only three parts that survived in the pond and in the sun was the wire, some of the battery, and the NOAA - National Weather Service Radiosonde Reconditioning Group mailing envelope.
(I really hope when I go full hermit I get back some of my mental faculties. I should have figured this out much faster.)
I had a friend that was in an '80s cover band with a bunch of meteorologists and I tried to get them to use the name Rocketsonde after they vetoed Hose Clamp (which I still think is the best name for a metal band EVAH!) They called themselves Decade of Excess, which I desperately opposed because I remember the '80s and there was nothing excessive about it. I was broke the whole time. Radiosonde would be a good name for a band too, maybe an R.E.M. tribute band.
It occurs to me now that there may be some people that haven't heard of a radiosonde or a rocketsonde. (See? I'm stupid! What is this impairment?!) A radiosonde measures things like temperature and pressure and logs them relative to altitude and position and transmits it back to a ground station. You can drop it out of a plane into a hurricane or send it up on a weather balloon or even shoot it up with a rocket. It's the internet so I'll look it up and put in a link. (I want my mind back! I just thought to Google "NOAA radiosonde.") Here's the description on the NOAA site. Oh, look a picture! It's just a chinese takeout container! No wonder there's nothing left but the envelope and the battery and the wire. According to the instructions for sending it back you're supposed to throw away the battery first anyway.

(2) Remove and discard the battery inside the radiosonde. NOTE: The radiosonde battery (generating 8 to 18 volts, depending on the model used) is water soaked and uses a chemical containing sulfur. If the battery is still active when you find the radiosonde it may be hot to the touch and emit a strong odor and hissing sound for up to several more hours. Keep the instrument outside and wait until the battery has cooled off before removing it.

Yeah, it was water soaked alright! I feel bad for the radiosonde people now after reading this website.


The current radiosonde tracking systems are 1950's vintage and the data processing computer is a 1980's IBM PC/XT. These systems are obsolete and are increasingly difficult to maintain. NWS has begun a program to replace the ground systems at all NWS stations with a new GPS radiosonde system. The program has four objectives:

- Use less radio frequency to avoid radio interference with other users

That's the saddest thing I've heard all day. I had an IBM PC/XT in the 1980s. I'm telling you, not a decade of excess. Good luck with that upgrade, National Weather Service. Maybe your next generation should be contained in whatever that envelope is made of. That thing is supreme.
Posted by Beachton at 7:14 PM