Florida provides health care for marine mammals, not for scientists

I get a lot of insulting job ads emailed to me by the State of Florida automated system. But this one struck me as particularly ironic. Here's a screen shot of the header. 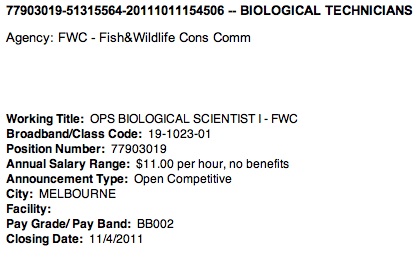 The minimum wage in Florida is $7.31 per hour. So you get an extra $3.69 for this job with no benefits. Let's see what the qualifications are. Here's a screen shot. 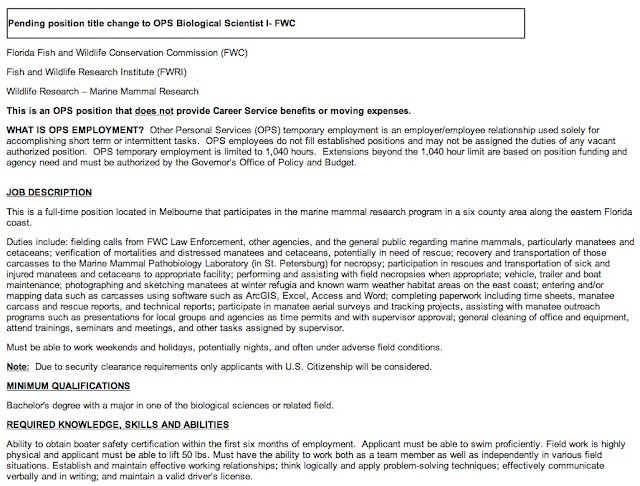 So basically Florida is asking somebody with a bachelor's degree in science to take care of sick and injured manatees, dolphins and whales but they aren't offering this person any health insurance and definitely aren't paying enough for them to buy any on their own. I think it is important for the sake of tourism to have professionals show up to deal with beached whales and propellored manatees, but what the hell?

As for that comment in the box, I'm glad at least they're doing something about that title. My first job out of school in 1989 my title was Technician. I can tell you it chapped me pretty bad. By the time I got hired in 2005 with the title Technician I was just grateful to get anything with insurance, but back when I was 21 the memory of what I went through to get my bachelor's degree was fresh. Also it says right there on my diploma that I have a "Bachelor of Science in Applied Physics with all the rights and privileges thereunto appertaining." I think not being called a technician is one of those privileges. Apparently somebody is trying to explain this to Florida.

How are the "job creators" supposed to hire professionals in a respectful way when the public institutions set such a bad example? And how can Rick Perry and those other idiots claim that scientists are motivated to lie about global warming because it gets them more money? What the hell money?! ELEVEN DOLLARS AN HOUR! That's only $0.625 an hour more than I get on unemployment. (If you divide my weekly Texas unemployment benefits by 40 hours. In contrast, Florida pays a lot smaller unemployment benefit. $11/hr is actually $4.125 more than you'd get on full unemployment benefits in Florida. By having unemployment benefits less than minimum wage they do sort of encourage people to take any shitty job. Of course it's not working. People just leave. That's why it was so much cheaper for me to drive that truck from Austin to Jacksonville than the other direction.)

But somebody will take this job. Some young environmental science major who grew up on a lake driving their dad's ski boat and they still have their room at their parent's house. And they will lie to their mother and tell her they have health insurance.
Posted by Beachton at 11:45 AM