Invasive species increase because of 9/11 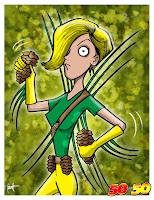 This article link tweeted by Carolyn Porco has made me even more upset than the AT&T DSL bill I got this morning. Apparently after 9/11 Homeland Security repurposed agricultural inspectors to look for people instead of pathogens. I've already dealt with AT&T and I don't think I can handle another blood pressure increase today. I'm not going to delve too deeply. I recommend you read the article.

I got as far as this and started yelling at the computer.


Homeland Security officials acknowledge making mistakes and say they are now working to step up agricultural inspections at border checkpoints, airports and seaports.

While not as dire as terrorism, the threat is considerable and hard to contain.

What?! Not as dire? It's a LOT MORE DIRE! Terrorists try to kill a few people and destroy some man made objects to make a idealogical point. Invasive species are here to DOMINATE AND DESTROY ENTIRE ECOSYSTEMS! Well, I mean they are just surviving and possibly thriving, but the way life works that has to potential to really upset the balance. Humans depend on balanced ecosystems so much they don't even know about them. Take them utterly for granted. They can understand suicide jetliners and collapsing skyscrapers but entire forests of dead trees apparently mean nothing to people. Look, we built that building and we bred those people. We can make more. The forest was not our doing and we cannot fix it. We can only try not to fuck it up. And we are not trying. We are failing. Humans fail. Lady Longleaf is getting tense.


One agriculture inspector who defied authority was demoted, despite being credited with saving California's citrus industry from the potentially devastating effects of canker.

While working at an international mail center outside San Francisco, the inspector found a package destined for Ventura labeled "books and chocolates." Inside were 350 citrus cuttings from Japan that were infested with canker, which has killed more than 2 million trees across Florida but does not exist in California.

He showed it to a supervisor, who, according to the Congressional Record, replied: "Look, we are here to protect the country from acts of terrorism. What do you expect me to do?"

The inspector sidestepped the supervisor and called the USDA. The resulting investigation ended with arrests and the incineration of 4,000 potentially infected trees that had been growing at an unregistered nursery in a prime citrus region.

But within a month, the whistleblower was demoted to search through the dirty laundry of passengers returning from foreign trips.

Yep, that sounds about right for a science-minded individual who does the right thing for the planet instead of the right thing for their limited self-interest. Hey, Whistleblower, what's your superhero like? Don't a lot of citrus trees have really nasty thorns? I'm thinking some sort of blow gun for your take-down weapon and maybe a thump upside the head with a well-thrown grapefruit for somebody that just needs a reality check.
Posted by Beachton at 1:42 PM