Tastes like a spider just came in my mouth!

You can sometimes propel amusement up the corporate ladder. I think they like it. Poor things, sitting up there in their expensive chairs looking out their big plate glass windows dealing with one gripe after another. An amusing anecdote is probably what they live for.

According to MacRumors, Apple is carefully tracking the reasons for iPad2 returns. One came back to the Apple store with a post-it note on it that said "Wife said no." This amusement made it up the chain of command until a VP decided it would be funny to send a free iPad back to the guy with a note on it; "Apple said yes." Hysterical. I hope his wife is into retracting her decisions. It's likely she didn't object to the expense as much as him ignoring her because he was engrossed in his iPad. I've heard of this. Wives that tell their husband they aren't allowed to read books because the wife finds it too hard to get their attention.

My own experience in corporate amusement is with Coca-Cola. Some time ago I was building a garden house for my aunt. My mother wanted to come watch the progress so she called up to see if she could bring anything from town. I asked her to get me some blue Powerade. That's what we drank during the 1996 Olympics, the blue juice, and I'd acquired a taste for it. We had a special Tyvek dollar bill that made all the Coke machines in Atlanta dispense any canned beverage we wanted for free. But when Mama turned up she had gotten the sports bottles with the flexible check valve and cap shaped like a SCUBA regulator. I opened one up and took a big swig. Mama looked skeptical. "What flavor is blue anyway?"

She tipped it up and then looked annoyed. "How do you work it?"

So she threw her head back and pinched that bottle hard. Her eyes flew open and she snatched the bottle away and held it at arms length as she gasped, "Aaaaagh! It tastes like a spider just came in my mouth!" 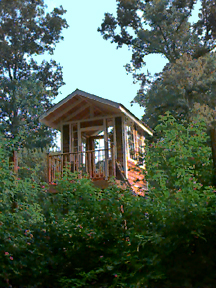 After I composed myself from convulsions of laughter I made up my mind to compose a message to Coca Cola regarding this incident. I can't remember what email address I sent it to. I found some feedback form on their website I guess. A couple of weeks later I got an envelope in the mail from Coca Cola with a coupon for a free six-pack of any Coke product and a generic thank you note for my input.
Now I don't know if they send that to everybody who goes to the trouble to send email or if somebody really did get a kick out of what my mama said about the blue juice in the ejaculatory bottle. If you look for that bottle in the store now you won't find it. I hope it's not my fault they replaced it with something less evocative. I wasn't complaining, I just wanted to amuse them.
Posted by Beachton at 9:11 PM