As part of the ongoing anti-antisocial experiment I'm planning to go to Trey Ratcliff's photowalk tonight. I've been reading a lot about Trey Ratcliff this week. I tried to find the link to some list of advice where I read he never took any photography classes but instead I found this one. I can't even read all that. It kind of makes me squirm. Especially the part where he says you have to get a DSLR. I have been a professional photographer, as in paid to do it, off and on since 1985. I had a Nikon F3 with a nice set of lenses and everything. I still have two enlargers in storage. But I sold my Nikon when digital photography took over, figuring if I wanted one later I could buy one used then and not have to worry about getting mold in my lenses in the meantime. That was a good damn camera.

But one time I carried it on a hike in the Muir Woods with all the lenses and it just about killed me. For the kind of photography I do I just can't beat my Casio EX-FH20. It's lightweight, it takes macro shots at 1 cm and zooms to 20 times. It's also noisy and it has purple fringing in bright backlight, but damn, I can fix that in Photoshop! I don't get how Trey Ratcliff can insist people carry all this extra weight and not have the right lens to get the shot they want AND THEN digitally doctor all his pictures to the extent there's not a single realistic pixel remaining. Don't even get me started on the expense. I just flatly disagree with him on this. Hell, I have almost 2 million views on my rocket video if you combine Vimeo and YouTube because I was the only person there WITHOUT a damn DSLR and I got the shot.

Now I get that people have different taste. I don't happen to like a lot of Trey's photos. But clearly plenty of people do. My online friend @Harbles on Twitter seems to think the world of him and recently asked him this....


@TreyRatcliff As a Blogger do you consider yourself equivalent to press?

and got the reply from Trey


@harbles I don't think of myself as press because I'm not a journalist. Also, my blog gets 50x more traffic than any local station.

As a blogger I do so sort of consider myself equivalent to press. I used to be the Features Editor for my college newspaper, though, which makes me a bit journalism minded. I was also a staff photographer as well as the photographer for the Physics department with my own darkroom. And I took a photography class. So back to the bit where Trey Ratcliff never studied photography; it's a shame to have a photographer with that much blog traffic put down the optics and physics involved. I guess he's ONLY a photographer and he's trying to be an evangelist to amateurs, where  I'm a photographer and a physicist/oceanographer/interior decorator/writer/house builder and I don't really like amateur photographers. For me anyway, Physics of Photography at Georgia Tech was a really good class. The professor, Dr. Braden, also taught Classical Electricity, which is hard core electromagnetism with differential equations, and he taught a 7 hour Electronics course with an hour lecture every day and a 6 hour lab. I took all of those. Photography was only moderately easier than the other two. Solid angle physics is non-trivial. Here's a page out of his notes. 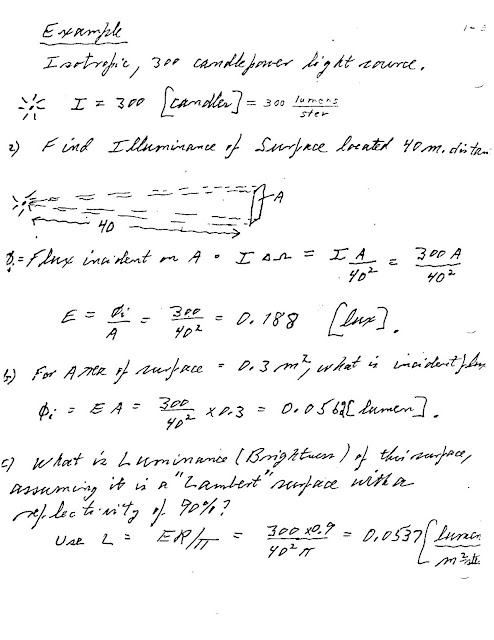 I scanned all of the notes from that class a few years ago for a former student who is now a professor who wanted them. I uploaded them just now to my iDisk in case anybody wants to download them (Like my brother or Shane for nostalgic purposes.) I expect they don't offer this class anymore since Dr. Braden not only retired but also died. (It makes me cry to think about it. He was so nice. He got lung cancer from asbestos exposure when he was refitting ships in the Navy.) It's a 4 MB, 189 page PDF. If you click the following link it's just going to start downloading, no viewer preview.
Download Photographic Principles
Posted by Beachton at 5:22 PM