I'm still sort of a guest in Texas but I'm getting closer to being a legitimate resident. I've got a quantity of my stuff here now but I'm still sleeping in the luxurious guest accommodations at my friends' house. I'm on their deck right now enjoying the fabulous view, feeling the breeze, and hearing doves coo. I'm also doing laundry in their high end front loading machines. I'm unsure about buying my own washer and dryer again for the crappy condo. Seems like a long time to cost recovery. But the laundry on the corner can't wash my clothes in unscented detergent. I asked.

I had a pretty exhausting week and didn't have an opportunity to update the blog. Here's what happened: 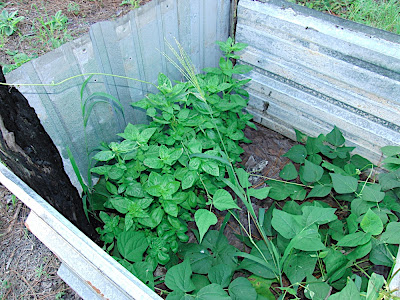 I got up Saturday in Beachton and checked on the deer/rabbit resistant garden experiment. The basil that grows down inside the box is ok but the pole beans leaves are all neatly eaten off as high as a deer can reach. I guess this shows you need the boundary of your garden to keep the vegetables at least neck length from the edge of the fence.

The pine bark I put down for mulch seems to be working great though. I used sheets of bark that fell off lightning struck trees in the woods. There's a few big grassy weeds but if there were anybody living there they could've pulled those out easily.

I got a truck in Tallahassee and loaded up the things I wanted back from my mom -- comfy chair, Jeanne Greenleaf painting, Robb White and sons table. Then went to Thomasville to load stuff from my mini warehouses. My dad helped me get my bed frame and lab table from one unit, rocking chair from another, cast iron sink and a faucet from another, then went to the big one to see how much stuff I wanted from there. 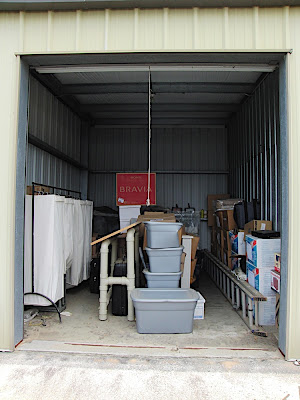 I wonder if Thoreau was storing this much stuff while he lived on Walden's Pond?

My dad went to relax in the air conditioning while I picked out the boxes I wanted based on what I really didn't want and thought I could sell on Craigslist once I got to Austin. There's the stuff I actually wanted here, and then I left behind things I thought I might one day want in Beachton if I ever build a bigger house there. 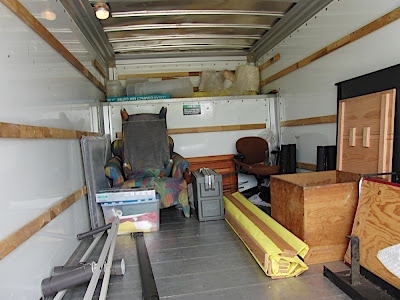 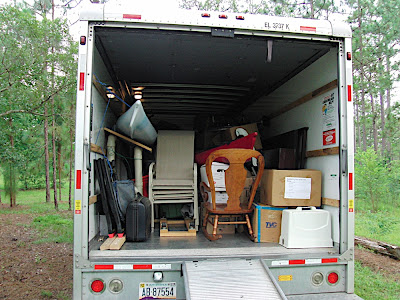 After I loaded all the stuff I wanted from there I went by my cousin Wes's new house in town. I gave him the cast iron sink. After seeing how tall his house is I also gave him the key to my warehouse so he can go get that ladder if he needs it. After the sink was gone I had only one item I couldn't move by myself in the truck -- the lab table top.

Here's what it looked like after I loaded all the stuff out of the shed in the country that I wanted. 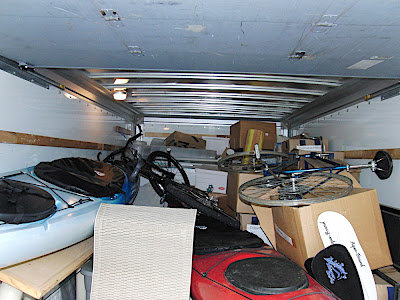 I brought two boats, my mountain bike, and Gokey's old Schwinn from high school. I'm either going to make that into a table or put tires and stuff on it again and make it a useable bike. It's kind of a collector's item, and also very very heavy. I'm not sure I want to try to pedal it up the hills in Austin. Would be fun going down though. It has a freewheeling front sprocket so you can change gears without pedaling. Sheldon Brown calls it a solution without a problem. 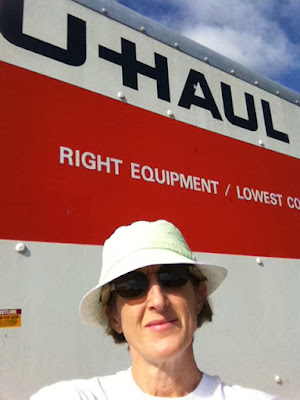 So here I am on the way on Sunday. I shot this photo at the Starbuck's in Tallahassee. I was uploading them from my iPhone to Facebook as I went along but I haven't figured out how to live blog to Blogger. Tumblr will do it but I've fallen down on that blog. I will have to catch it up when I get settled out here. 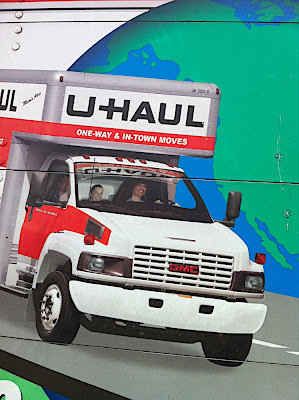 This next photo is of the back of my truck. I noticed this when I stopped at a rest area near Marianna. You may wonder how I can remember where I was. The location comes up on a map in Picassa. Go iPhone.

I took this picture because of the three people pictured in the cab of that truck. They would not be that happy. It was very uncomfortable. And why is the woman driving? Does the man have a DUI and lost his license? I'm sure UHaul is just trying to indicate their diversity or whatever the buzz word is for today's political correctness, just it just bugs me. If I had somebody to go with me I'm sure we would take turns driving, but I would have no problem posing in the passenger's seat for the picture. Picturing the woman behind the wheel is not a triumph for feminism. It just makes her look like she's being taken advantage of by a lazy man. He probably made her do all the packing too. 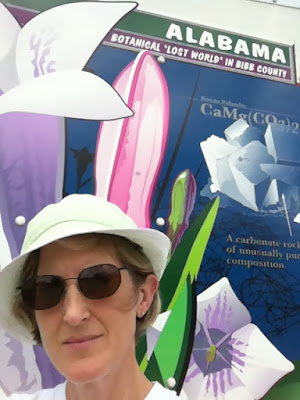 I made it to Mississippi at 1:48 pm. I took this picture of the side of the truck to show that I completely missed all of Alabama. It looks so pretty in the graphic, but all I saw was what was on I-10 and there was no inviting rest stop. 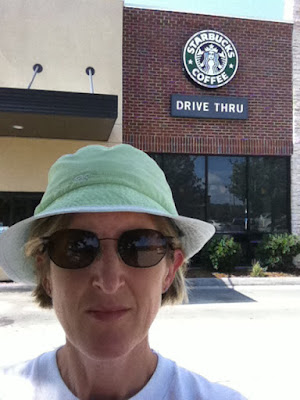 I made my next Starbuck's stop in Slidell, Louisiana. I took advantage of the free wifi to download the latest podcast of Wait Wait Don't Tell Me. I'd already run through the last couple of weeks' worth. It was helpful to keep me alert, but it made me realize I sort of overdid it loading the truck. I was very sore. Laughing made my whole torso ache. 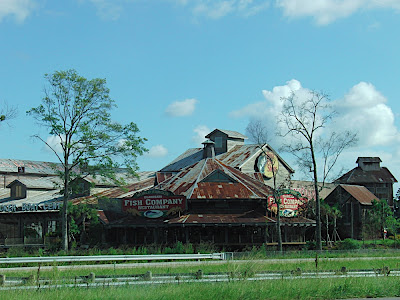 I pulled over at the end of an on-ramp after getting gas to take this picture with my big camera. I could just picture the face my dad would make.... I just wonder if they have a real roof under this "decorative" rusty bullshit. 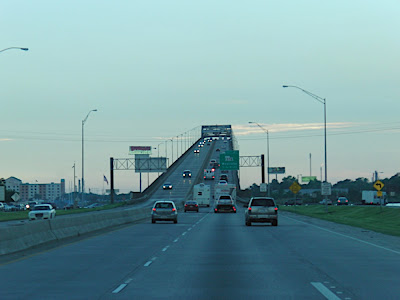 I was pressing on trying to cross this bridge before dark. This photo was taken at 8:07 pm. This is the scariest bridge I have ever crossed. It's in Lake Charles, Louisiana. I presume it's over Lake Charles, but there is no signage to verify it. The thing that makes it so scary is the combination of slope, elevation, and width. It is very narrow. It was worse in the truck than in the Honda, too. Probably didn't help that I was driving with one hand so I could take this picture. I did not look at the display though, I shot it blind. Was a pretty sky. Made it sort of OK. 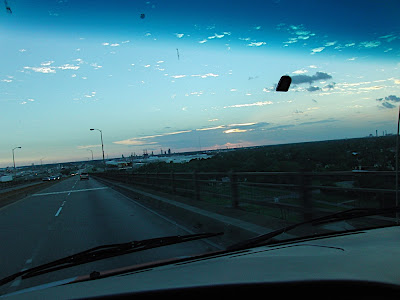 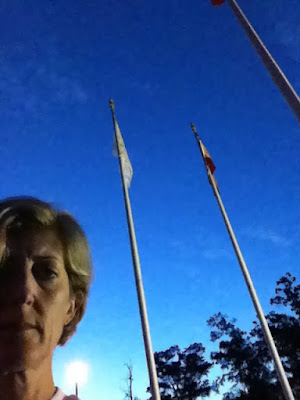 So here I am finally in Texas. I was as tired as I look here. 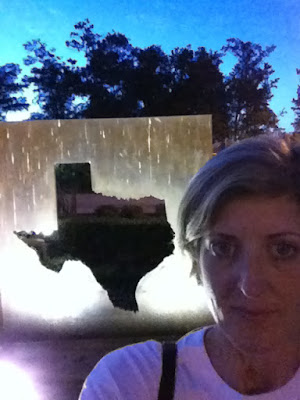 Texas does have a unique map shape that looks good on a sign. There are a lot of states that couldn't pull this off. I'm talking about you, Colorado and Wyoming.

I don't know the facts, but I'm going to guess Texas has liberal laws with fireworks. Everybody seems to have gone out and bought a box of something labeled, "Warning: Shoots Flaming Balls!" It was a lot of fun to see the decorative equivalent of bombs bursting in air all along the interstate. I was driving straight into the official Beaumont fireworks display that was apparently set up on the waterfront. As I came over the bridge (a gently sloped, wide, low bridge) there were cars stopped on the shoulder watching the display. I got there exactly at the finale. I sped on by hoping I didn't block anybody's view too much with my big truck. It was definitely the highlight of my trip. I got to see fireworks all the way to Houston. One time I saw a carnation that seemed to last a really long time. As I got closer I realized it was just a really tall floodlight over a feedlot and I was seeing the insects all around it.

I finally made it back to the house at 3:30 in the morning. The next day I went to the crappy condo and started unloading the truck. I moved about half the stuff into the living room then went shopping for stuff I needed to get my bedroom ready for mattress delivery the next day. I worked on that until 10:30 pm then unloaded the rest of the truck. At midnight I started assembling the bed frame. I was all ready for the delivery the next day when I finally got back to the house and went to sleep at 3:30 again.

Tuesday one of my coworkers helped me get the lab table out of the truck and then we returned it to UHaul. Then freaking Macy's brought the wrong mattress. There was much ranting. I will spare you the detail. I'm mostly focused on end results anyway. I have to wait until next Wednesday for my mattress now. That's why I'm still enjoying the hospitality of my friends. But the sun has come across the deck and is encroaching on my space. Back to working on the condo!
Posted by Beachton at 11:30 AM