Today is the first time I've flown in 7 years. There are parts of it I really like. Taking off, seeing the landscape from up high. Rivers are fascinating to me. Oxbow lakes -- cool.

But I would think that with all the progress of electronics -- Kindles and iPads -- I wouldn't have to be plagued with the fucking newspaper anymore. I have a serious chemical sensitivity to the newspaper. I don't know if it's the paper or the ink or what, but it gives me about the same reaction as latex. Makes my upper lip burn and I my sinuses swell up and I get a headache. The plane from Austin to Memphis was a tiny little thing. I was crammed in next to a man who had the entire USA Today and he was brandishing and flourishing it like a goddam matador. I curled up against the window like a cephalopod and just tried to deal. After I woke up from a stress induced nap he was getting out a portable DVD player, turning it over and over his hands looking for where to plug in the coax connector of his power supply. I asked him where exactly he was going to plug in the other end? I'd heard they rigged some planes to power portable electronics, but I figured it was only the big intercontinental planes. He kind of went, "Oh yeah" and put that plug away and started hunting where to plug in the headphones instead. Then he watched The Big Bang Theory for a while, then got out the paper again and held his arms way out with it so I started channeling an octopus going into a wine bottle and tried to insert myself between the edge of the seat and the window. 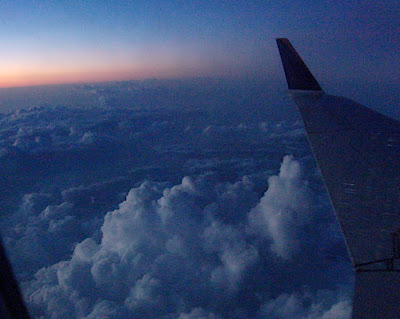 Now I'm on the flight from Memphis to Tallahassee and it's not full. I had room to get out my lappy and make myself at home. It was a beautiful sunset take-off. Unfortunately the dinner I ate at the airport gave me an attack of IBS and I couldn't really enjoy myself for concentrating on when the fasten seatbelt sign was going to go off. My seat right by the lavatory seemed serendipitous.

The instant that seat belt light went out I discovered another thing to be grateful for on airplanes. The noise is so great and the airflow so strong it gives one a great feeling of privacy in the lavatory.

OH MY GOD! What is that woman rubbing on her hands?! It smells like a bucket of mayhaws that's been sitting in the sun for two days. Jesus Christ, woman, what were you thinking getting out that hand lotion in here? How did you even get that on the PLANE?! If you had more than three ounces of that shit we'd all be doomed. Three men just sneezed simultaneously.

It's incredibly cold on this flight. Even cuddling the lappy for heat isn't working. I better put away Lappy and try to find what air nozzles are open around me. Maybe the back row won't be as drafty.
Posted by Beachton at 7:36 AM