Smoke from cooking is bad for you

In a timely follow up to the prescribed fire smoke topic yesterday there's an article on Discovery News today about the danger of smoke from broiling hamburgers and frying chunks of chicken in a wok. Researchers found polycyclic aromatic hydrocarbons, known carcinogens, in vapor and particulate form in the cooking fumes. They haven't made a firm link to cooking and cancer, but they're working on it. A study over a decade ago in China found higher rates of lung cancer in women, who do most of the cooking, compared to men, who smoke more tobacco.

I am writing this blog entry while I eat a Caesar salad with chicken on it. I fried it in a wok. I used olive oil and not peanut oil though, and I cooked it outside on the front porch like I always do. I wasn't really thinking of saving myself from lung cancer when I established the habit of cooking outside, I was just trying to keep the moisture out of my house and keep the surfaces in my house free of clingy grease and odors and moisture. Fastidiousness turns out to be healthy! 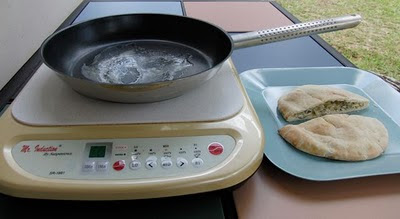 This isn't my supper tonight. It was dark and I didn't know I was about to find out that cooking fumes contain cancerous agents. But it is my outdoor cooking spot with my invention of spinach artichoke dip smeared in a pita bread and cooked in butter. That's good snackin'.
Posted by Beachton at 10:21 PM