After I found out that Apple doesn't buy TV advertisement time on Fox I started thinking about how computer choice mirrors politics. In my immediate family there are some conservatives who use Windows exclusively. The liberal ones use Macs. My liberal step-sister who did spoof Sarah Palin impersonations during the election once chased a thief down the street for stealing her iPhone off a café table.

I began a mental tabulation of all my friends' computers and politics. The most conservative ones have no Apple products at all. The ones that have Windows machines but have a liberal streak at least have an iPod or an iPhone, or they recognize the faults of Windows.

My friends who aren't liberals or conservatives but libertarians like Macs but won't buy new ones because they are think they are too expensive. They tend to favor Ubuntu or the kind of tiny Linux you can run off a flash drive.

Is that the connection to politics -- the price? Some people are willing to pay more for something elegantly designed that encourages them to be creative. Other people will use the same busted backwards-compatible bullshit forever.

I posted this computer-choice-mirrors-politics concept on Facebook and my libertarian friends immediately piped up with their opinions (that they are just cheapskates.) My friend Steve Kuck used "osnostic" to describe his use of multiple platforms. Another one of my friends who recently got a Macbook commented that she liked that term. So today Steve registered the URL osnostic.com (and osgnostic.com for more careful spellers) and quickly set up an open source web site to host a forum for people who are having difficulty getting one OS to do something they can easily do in another. He found his first example by going to the Apple MobileMe site which told him his PC running Ubuntu was not supported. (It will let him view my Galleries on me.com just fine though.) 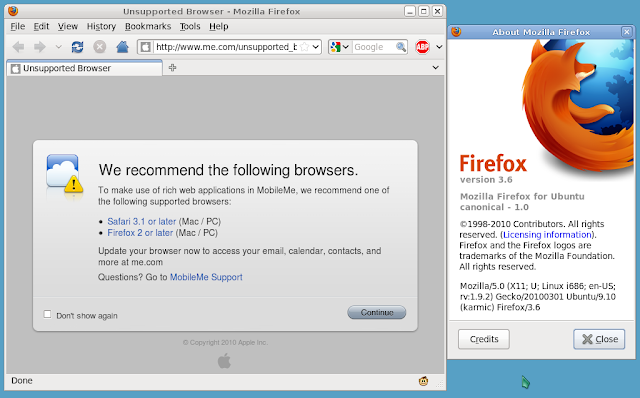 Email ThisBlogThis!Share to TwitterShare to FacebookShare to Pinterest
Labels: Liberal vs Conservative, Mac vs PC