Controlled burns produce less greenhouse gas than wildfires. This is obvious to those of us who know about prescribed fire, but now there is satellite data to back it up and a Discovery News article about it. This particular study is aimed at Western forests.

Back in Georgia they're dealing with the smoke issue. This PDF report from the Georgia Forestry Commission puts it succinctly. "Drift smoke from prescribed fire and wildfires concerns urban dwellers who understand very little about natural forest processes. Future Georgians must come to understand the life sustaining properties of healthy forests, important to their very livelihood, and the natural role that fire plays in ecosystems." So the Forestry Commission came up with a plan to get people to quit their bitchin'!

The Federal air quality guidelines are also a problem for controlled burns. The Georgia Prescribed Fire Council wrote a letter to the EPA in 2007. "We consider prescribed fire smoke to be a 'socially acceptable' source of emissions that is acute, not chronic like other types of pollution. Prescribed fire is a safe way to apply a natural process, ensure ecosystem health and reduce wildfire risk. We will strive for the recognition from EPA that prescribed fire is a tool that can enhance human health and safety and cleaner air in many regions, and thus should be encouraged through EPA policy and/or rule." For the one day a forest makes smoke in a year it spends all of them converting carbon dioxide to wood. Well, mostly in the summer.

Just in case there's some confusion over what carbon sequestration is, let's take a longleaf pine tree. Photosynthesis takes carbon dioxide from the air and water taken up from the roots and converts it to wood. In general the amount of mass a tree adds equates to that mass of carbon dioxide taken out of the air. This is carbon sequestration. The only way the carbon can get out again is if you burn it. The needles from longleaf pine trees are highly flammable. We try to burn up what falls off the tree every year or three. That carbon is released back to the atmosphere as carbon dioxide and converted to elemental carbon -- soot. But the weight of the needles that fall is less than the weight of wood the tree added that year. There is a net sequestration of carbon. If the fire is very hot the nitrogen goes back into the air as well. Robb White believed that a cool fire allowed the nitrogen to go back into the soil to fertilize the trees but I haven't been able to confirm this in peer reviewed journals. Either way, the result of the burning is more longleaf pines adding mass all along their trunks and plenty of diverse ground cover preventing erosion and supporting healthy animal communities. 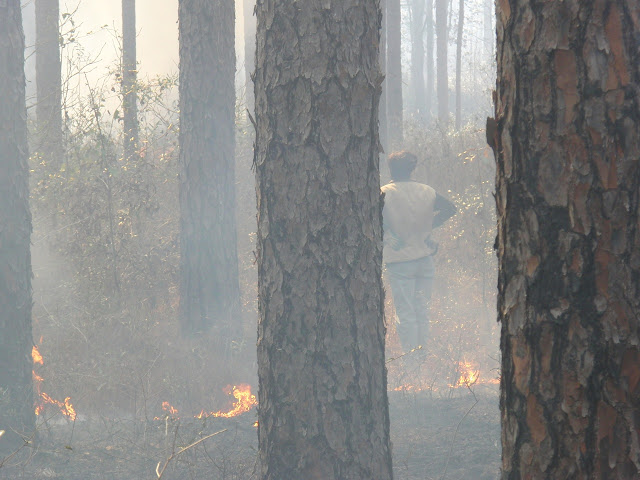 There was a summit in Tallahassee this month about air quality as it relates to agriculture. I heard a little bit of it on the radio. There seems to be concern that new air quality legislation doesn't exempt smoke from prescribed fires.


I hunted around on the internet for more information on this but it frankly just makes me tired. There are so many REGULATIONS. So many committees, so many councils. I'm so glad nobody has tried to make us jump through any more hoops than we do. I don't really understand how the air quality regulations can be enforced. We often burn off between Christmas and New Years. If Georgia has already reached it's quota of pollution for the year will we have some sort of EPA inspector at the gate with a citation? How can they possibly measure this? Right now we just call up the Forest Service when we want to burn and if the wind isn't too terrible and it's not too dry they give us a burn permit over the phone. You tell them about how many hundred acres you want to burn and they don't even act like they're writing it down.

I apologize for the lack of conviction in this essay but that's sort of the point. It's hard to figure out what's really going on with the EPA these days. And hard to get worked up over something I can't imagine being enforceable. Georgia is clearly pro-fire when it comes to forests and anti-fire when it comes to burning construction debris in Atlanta. And they are also anti-up-in-your-business when it comes to anything way out in the country. I hope the promotion of smoke acceptance goes well. I'll keep posting videos and pictures of it as my little part of making it mainstream.
Posted by Beachton at 7:40 PM