OK, this is just the last fucking straw. All week long IEEE Spectrum has been running stories about how the STEM shortage is a myth created by the tech industry refusing to pay decent wages to experienced scientists and engineers. No shit. I've been saying that for 15 years. The only thing about the stories is how bland they are. Why am I the only one that finds the whole thing infuriating and rant-worthy? Why don't they end with a call to FUCKING STOP IT! The idea that a scientific education becomes obsolete is just idiotic. The whole basis for this is bullshit.

My first consulting job out of college in 1989 I was hired to create a computer interface and write some software to test hardware that allowed airlines to communicate with their pilots in the air by radio. I'd had one Applied Physics class called "Interface Electronics" and I took Fortran and Pascal like everybody was required to back then. But I had never done any RS-232 interfacing or used the computer interface card they had and I hadn't ever even glanced at C programming language. But Baker Audio bought me a PC and Borland C++ in a box at the computer store, sent me back to my graduate student office at Georgia Tech and expected me to figure it out. And I did.

So what the hell is this bullshit about becoming obsolete? I can figure stuff out from scratch even better now than I could back then. Now I have the internet full of forums with people explaining what they tried already and why it didn't work. THAT is what STEM education is about. Learning how to teach yourself, learning how to solve problems. When I worked on circuit design in school we had to learn the resistor color code to identify leggy little guys we could use in our breadboards. Then I got a job designing printed circuit boards with surface mount resistors. They had tiny numbers printed on them to indicate how many ohms they were. No problem. The schematic is identical. They didn't change Maxwell's Equations did they? Do antennas not work the same way they used to? Is it no longer the right hand rule, it's the left foot shortcut? This is bullshit. I'm not obsolete, you're stupid. >hrumphhhh<

I'm not saying science doesn't advance. It was great fun to retake the FSU equivalent of Nuclear Astrophysics and Stellar Evolution again in 2007. So much new information since I took it in 1988! There's a whole new theory about where the moon came from. But hey, look at that! There I was in the class learning the new stuff. Because THAT'S THE WHOLE POINT! Once I bought into science, technology, engineering and math education as a life choice I didn't just stop in 1989 when I got my BS degree. I actually immediately signed up for grad school with no intention of finishing just because I really wanted to take Psychoacoustics and the professor was about to retire and the opportunity would be gone forever.

Which brings me to why I'm so fucking outraged by this Jaguar-melting office tower in London. People have no respect for the people who truly understand the underlying science and they rely far too much on computer models where they wouldn't know the wrong answer if it set their clothes on fire. Why is it acceptable for an institute to just discontinue an entire subject when the professor retires? I see the body of work of scientists past just discarded as trivial and obsolete and it incenses me. My professors at Georgia Tech were truly brilliant and now they are dying and their knowledge is dying with them.*

The insanity of this building design and the completely lame excuses just fill me with a speakable-only-in-expetives rage.


"I knew this was going to happen," said Viñoly, speaking to the Guardian on Friday. "But there was a lack of tools or software that could be used to analyse the problem accurately."

No, seriously. That is completely unacceptable. What the fuck, you utter jackass?! Get out a goddamm piece of paper a pencil and a straight edge and figure it the fuck out! You are an insult to the profession. I'm not even IN that profession and I am insulted. Here, you useless sack of shit, here's a picture of a the Universal Sun Chart in Ramsey and Sleeper's Architectural Graphic Standards, copyright 1951. 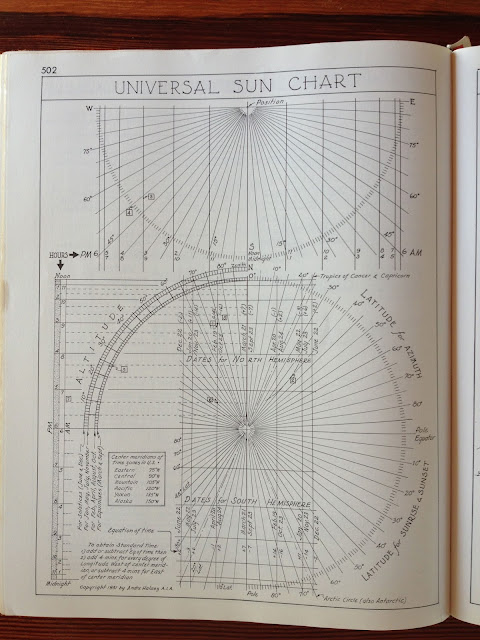 There is no way anybody with a decent architecture degree doesn't know how to do this most basic optics calculation. Is this chart too complicated for your computer-model atrophied little brain?Angle of incidence equals angle of reflection. If you didn't get this in high school that's a crying shame. But to get an architecture degree and not know this, then I think your university should be outed as a fraud. The angle of incidence is not a goddam secret locked up in some non-existent software. It's hiding in an advancement-proof file format known as a BOOK. Even with a severe case of middle age I could work through the worst cases of this problem on a piece of graph paper in less than 8 hours. And I'm not that bright. Barely average based on my grades at graduation. I am far too afraid I'd mess it up and embarrass myself if I really did it and put it on my blog though. I leave it to the class as an exercise. The point is if I am so sure it could be done why the hell did this building get built this way? I'm not sure if it's a case of people having no brains or no balls. For fuck's sake, you just shouldn't start building something if you can't afford to build it so it doesn't ignite the neighborhood.

THIS is what you get when you fire everybody on their 30th birthday and fill all the STEM jobs with underpaid fresh-outs. Management loves their fresh ideas, but they don't have to take them seriously when they predict something bad is going to happen. More from the Guardian story:

In London, he said the issue was the result of the nature of the development process in the UK, in which the architect is often sidelined.
"One problem that happens in this town, is the super-abundance of consultancies and sub-consultancies that dilute the responsibility of the designer," he said, "to the point that you just don't know where you are any more."
The developers have blamed the problem on "the current elevation of the sun in the sky," a position Viñoly seems inclined to share.
"When I first came to London years ago, it wasn't like this," he said. "Now you have all these sunny days. So you should blame this thing on global warming too, right?"

Just fucking stop it. You're killing me.

* Sorry the link to Dr. Braden's class notes at the end of the linked article is broken. My free FTP at Apple went obsolete.

*Update: After I published this and tweeted the link I got a reply from @ed_davies on Twitter with a link to a video where an astronomer does the exact thing I described above. This is wonderful. I'm impressed with how calm he is and not reduced to incoherent cursing.

I notice this is by the same guy that does the Periodic Table videos. I love those.

** 2nd Update Here's a still picture of the protractor work sent to me on Twitter by Professor Mike Merrifield from the University of Nottingham. Also seen in the video above. 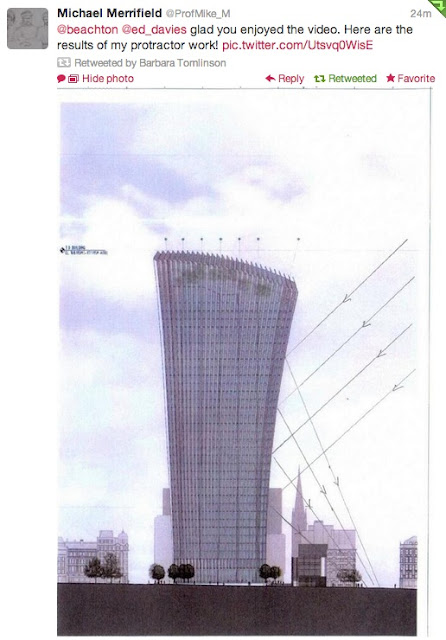