I like to do experiments. I've measured how hot t-shirts and birdhouses get in the sun, set fire to different materials used for rain screens on houses, and simulated rocket shock waves with ripple tanks. I even count developing recipes for making a single serving of cake cooked in the microwave in a tea cup as science. These are mostly physics and chemistry experiments. I like the hard sciences. It can be done in a short period of time, asked and answered.

I also like natural sciences. I just find it a challenge to my attention span. I don't have the stamina to go out in the field and take measurements with the regularity and precision that would produce a set of data that seems accurate to my physics-adjusted mind. I know I should probably prepare a study plan and apply for a grant to collect data on the endangered gopher tortoises (Gopherus polyphemus) that live in my yard. It's just that they are most active in the time of year where the woods are uniquely hostile. The ticks, chiggers, ants, and yellow flies would eat me alive if I had to go out every day and survey a large number of gopher burrows. But I can't help paying attention to them when they are all up on me. I always have my iPhone, so I take pictures.

Today I was climbing down from my loft and saw something outside the window that was a bit odd.

There is usually one gopher per hole. I've never seen this persistent bickering until recently. But then again, I wasn't able to constantly observe a gopher hole until I started doing small years.


These two male gophers have been fighting over this hole in my yard for at least 2 years. Every day in the summer the second gopher walks over there and spends the day on the apron of the burrow. When I walk by they go down the hole, but the back one won't let the other one in all the way. Once he got himself turned around and was trying to come out and gopher behind him must have had a grip on him and wouldn't let him out. I think they fight a lot when I'm not looking because the apron of that burrow is just a mess of gopher scuff marks and toenail digs. In 2005 I came upon a gopher upside down in my driveway. He was right outside a burrow and there were gopher turds here and there. It's about like cow or horse manure, but I don't have a cow or horse so I deduced it was from the gopher. They eat the same thing after all (see video at the end. Bahia grass and whatever they can get in their mouth they eat.) I guess they shit when they fight? Which is, well, I have no opinion on that.

So when I saw this gopher today with this turd stuck to his back I figured it was something that happened in a fight over that hole.

That hole wasn't there when I built my house in 2005. It turned up the second year I was here as a juvenile's burrow. Then a large gopher usurped it a few months later and enlarged it. It is southeast of my house, in full view of my east and south facing windows. I can do ecology observations without even leaving the air conditioning.

This second gopher spends the night either in another hole on the North side of my house or maybe in one of the burrows to the south near my lab. (The converted Spartan trailer) If I was a better scientist I would track him and note where he went every morning and night and make a chart. If I see him coming or going in the morning or at dusk I just make a mental note. I cannot imagine what makes the stump hole so popular. Maybe because it's under a giant stump it has some structural advantage.

Last year another juvenile dug a hole nearby. I put a stob near it to stop the UPS man from driving over it.

You may be wondering how I know who lives in which hole. I kind of don't. I am not that rigorous in my identification. Whoever goes in that hole is that name that day. But I can kind of guess how old the gopher is that lives there because they are like the hollow tree entrances in Peter Pan. They are exactly fitted to the user. Although these large ones that are worth fighting over may have a bit larger error bar. If I was a good scientist I would measure the gophers and measure the holes and make a chart.

All of these holes are in that same little mown patch outside my window. I guess that makes me Goldilocks?

Here's a gopher that fits that size hole. I took this today too, right after the turd gopher.

There used to be a 4th one for a guy this size.


He came from one of these.
I found a lot of these rolling around my yard this summer, mainly in the driveway. The female gopher is old and lazy and doesn't do a good job digging the hole for her eggs and they get washed up or dug up by predators. I rebury the ones I find intact. I have no idea if they ever hatch. I try to keep them right side up, but I don't know if they were rolled around by whoever dug them up.

There was a hole by the stump for a hatchling gopher but something round has taken over that hole. This WAS a gopher hole a few weeks ago, but now it is home to something round, like a snake or a mouse maybe.

You may be wondering about the significance of the color of the sand outside these holes. The soil on my hill is original undisturbed earth. It's never been tilled for agriculture. So it retains very clear boundaries. I learned of this when I dug the post holes to build my house. The first foot is very white sand. Then there is a layer of yellow sand. Then all of a sudden it turns bright orange. This is called the Norfolk fine sand profile, and is clearly shown in the county soil map from 1905. (Back in 2005 I called the Georgia Archives and they mailed me a CD with a giant TIFF file of this poster size map.) 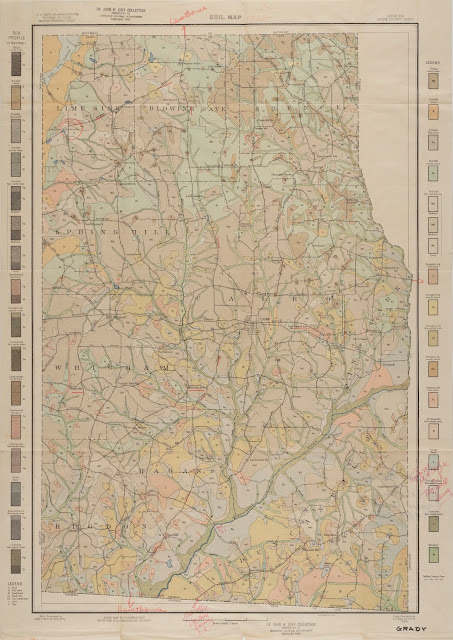 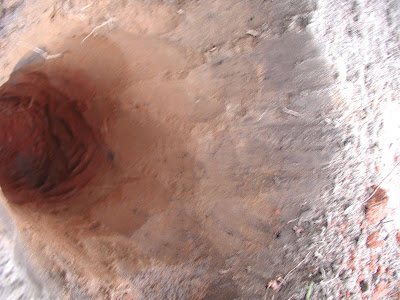 The point is that if the apron of a hole is only white and yellow sand I know it is shallow. When the soil they're pushing out is bright orange then I can tell they have gone about 3' deep or more. This is only valid when it's freshly dug up. Rain and sun soon bleaches and leaches the apron of the burrow.

If I was a good scientist I'd put my iPhone on the tripod holder and put it on my extendable monopod with a flashlight and a wheel taped on and shove it down those gopher holes and see what they're like down there. But it just seems terribly rude. The gophers are nice enough not to come in my house and eat my porridge, I feel like I owe them the same respect.

I did start recording hole locations on a free iPhone app. But I got bored with that too.

If I was a good scientist I'd pay for this app so I don't have to look at advertisements. And I'd document ALL the holes I can find, and I'd go look for them in a systematic search. (Unrelated note, the aerial photo here is old. My pond is full now.)


I believe I can tell females from males because males have a larger gular plate under their chin. I suppose it's for fighting over the best burrows, a lever arm to turn the other one over. I could be wrong in my guesses though. The only real way to tell is to turn them over and see if the bottom plastron is concave, then it's a male. Females are flat. I think turning a tortoise over is extremely rude, so I don't do that. It's not that important to know which is which. Also it's illegal. I don't have a science permit. Civilians aren't supposed to harass endangered species.
Here's a gopher picture I took between the lab and the house. I think this might be Chimney Gopher. That's a hole to the northwest of my lab by the pile of bricks from the old chimney. I don't mow near it so it would be a week of itchy chigger bites to push through the briars to go take a picture. I started to get confused about which gopher was which as I went through all my pictures so I went out to study Stump Gopher's gular plate to convince myself he's a male. I took my zoom camera and went in the house to wait for him to come out. Then I tried to go out there fast and catch him before he went in his hole.

I just went out again as the sun set and inventoried the four large gopher burrows near my house. They were all at home. This is the gopher in the most coveted stump hole tonight.
Shed Gopher was home too. Her hole faces north so I couldn't get a natural light photo. Batteries were low in my zoom camera so I used my iPhone with the flash.

I checked the other gopher hole adjacent to the road downhill from my lab, Drain Field Gopher. That's the biggest of all the holes. It's at the bottom of the drain field for the septic tank.
He was too far down in his hole for me to get a picture. I know he was in there though because he huffed at me. That's what the gopher says. HHHHFFF!

I started this blog entry today because seeing that big gopher and little gopher together made me think of a question. Why do birds hatch from eggs and then quickly grow to their maximum size and then just stay that same size forever? Ornithologists would roar with laughter if you said "Ooo! A Pileated Woodpecker! And it's a BIG ONE too!" But gophers seem to keep growing. Drain Field Gopher is remarkably huge. Alligators keep growing, and there are as many sizes of turtles sunning on logs in the river as there are sizes of scallop shells on the beach. Is it related to sexual maturity? Lifespan? If I was a good scientist I would know this, but I didn't get any advanced biology classes. It's an embarrassing gap in my education. I'm going to attempt to research it without access to a university library database. If I figure it out I'll write another blog. If anybody knows a good resource, let me know in the comments.

Meanwhile, here's a video of shed gopher grazing outside my window from many years ago. I believe this to be the female that lays all the eggs, mainly because I caught her laying eggs in the soft soil I'd just dug out for a post hole when I was building my house and she ran back to that hole on the shed side of my house. The hole could have changed hands but I'm kind of stuck with that notion now.
Posted by Beachton at 7:54 PM