Yesterday I saw an adult gopher tortoise and then a baby gopher tortoise and suddenly a question popped into my head. "Why do birds grow up so fast then stay the same size until they die?" Gophers grow pretty quickly for 8 to 10 years until they reach sexual maturity, then they grow more slowly. But they keep growing. Why don't birds?

Short answer: Because they fly.

This is what I would tell anybody who asked me how I know a 1 1/2" hole is the right size for a wren nesting box. Why are all birds of that species capable of fitting through a hole that size? Aren't there smaller ones and bigger ones? Nope, I'd tell them. They are all pretty close to the same size. It's because they fly. After they hatch they have to quickly get to that ideal size for their particular flight physics. Then they stay that size forever because their ability to fly depends on it.

I would be making it up, but that's what I would tell them.

If anybody ever asked. Which they don't. Because every intelligent person knows a juvenile Red-tailed Hawk is the same size as an adult, even if he doesn't have his pretty red tail feathers yet. (I'm so socially stunted I assume everybody has read the same children's books I read, even Rufous Redtail, which is so rare I have never found another copy besides the one that burned up in my childhood home.)  But there are really ignorant people who don't know this. I've heard of people who think wrens at the bird feeder are baby robins.

It's odd I've never asked why this consistency of size exists, or how. Now I want to know the mechanism for it.

I searched scholar.google.com fruitlessly for a real academic answer to this question. I searched the Cornell Lab or Ornithology web site, I even looked in the index of Richard Dawkins' book The Greatest Show on Earth and found a single page that barely touched on the unique evolution of birds separate from reptile descendants of the common ancestor.* Even that didn't come right out and explain how constraints of flight made each species of bird so close to the same adult size.

Nobody explains why all Carolina Wrens fit through a 1 1/2" hole. Not anywhere I can find on the internet anyway. It may be chapter four in every ornithology textbook ever written, but it's sure a secret on the internet. Maybe it's just a boundary condition everybody takes for granted because it's so obviously true by empirical evidence.

I found a meta-study into the variation in adult body size based on latitude. There's a trend for birds who live in cold climates to be slightly larger than individuals of the same species who live where it's hot and humid. I read this whole paper (Patterns of within-species body size variation of birds: strong evidence of Bergmann's rule) and never did it explain why they expect the adults of the same species to be the same size in the first place. I hoped they would explain that before they started studying extremely minor variations of whole populations.

Finally I found a paper that turned on the lightbulb that allowed me to make up my physics-of-flight-constrains-size explanation. This paper didn't bother to explain why all grown birds of the same species are basically the same size. But it did explore why all grown birds of the same related group of birds are pretty similar in size. This paper (Similarities in body size distributions of small-bodied flying vertebrates) was very hard to read. I had to keep looking up words. Basically they amalgamated data on body size of perching birds, hummingbirds, and bats and compared them to the body size of rodents and the class that includes shrews and moles. They did a bunch of statistics, plotted the data, and decided that the flying ones and insect eating ones are more similar to each other than they are to rodents. I think they are saying related birds and animals like shrews have very specific functions therefore they have very specific (and similar) body size. Whereas rodents are more adaptable. I think that's what it says. Take a taste of this practically indecipherable text from the abstract:


Empirically, the clades with the most similar body mass distributions are the Passeriformes and Chiroptera, a result inconsistent with similarities among distributions being attributable to phylogeny. However, the other clade of flying species (Apodiformes +Trochiliformes) was less similar to either Passeriformes or Chiroptera than was the Insectivora, which is inconsistent with the pattern expected if body size distributions were influenced by constraints of flight. A test for phylogenetic symmetry indicated that the empirical pattern of similarity was statistically inconsistent with this hypothesis, while a test for functional symmetry indicated that the empirical pattern was statistically consistent with this hypothesis, though not perfectly congruent. Hence, we conclude that there is evidence that functional constraints influence similarities in body mass distributions among species of distantly related taxa.

I am not certain, but I suspect it actually says that for a group of related descendants of a common ancestor the requirement of flight does not force all subsequent evolutionary iterations to be similar in size. That's fine, I don't care. I just want to know why all Ruby throated hummingbirds are the same size, not how Bee hummingbirds can be so much smaller. First things first. I read the whole paper and studied the plots and read the discussion and conclusions. I looked up words. I decided it didn't have the information I wanted anyway and wasn't worth the effort to really understand it.

Maybe if I could work out what "phylogenetic symmetry" means I could come around to the answer.

It's frustrating not to be able to find a nice explanation. I may need to actually ask an ornithologist. I just hate to impose on them. I'll just continue to educate myself until I can read that abstract above without a cryptographic key. I'll read this whole Dawkins book and write an update if I figure it out. 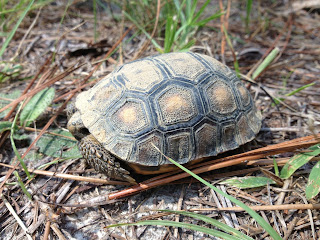 *page 159-160 discusses the cladist view regarding the common ancestor to birds and reptiles and how excluding birds from the reptile line is not accurate because alligators are more like birds than they are like turtles.
Posted by Beachton at 4:09 PM