Slate had an article this week about sous vide. They think everybody will be buying a $300 sous vide circulator any minute now. About a year ago they had another article saying sous vide was not going to catch on, all you need is a microwave and a rice cooker. I second that. As a small-houser I have no range. I depend on countertop appliances for all my cooking. Microwave, rice cooker, toaster, and Mr. Induction (my hot plate) are all I use to cook in the house. I discovered a new use for my rice cooker this spring. I took pictures of it but never got around to blogging it until Slate reminded me. 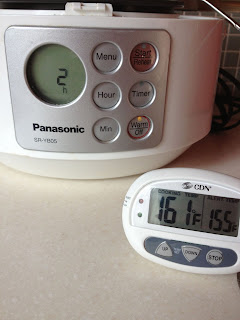 I have a friend in Austin who made his own sous vide set up with some electronic controls and a roasting oven. I already have something that very carefully maintains a steady temperature, my fuzzy logic rice cooker. It will keep rice delicious for 13 hours. I put some water in it and set it to Keep Warm to see what temperature it holds.


About 160°F. That's too hot to sous vide beef and messes up the elusive perfect sous vide egg. (I tried it. Just hard boiled it.) It is a fine chicken temperature though. I have cooked whole cornish game hens in the rice cooker before, but not vacuum sealed. I just put the raw chicken on top of rice with the right amount of rice water, set it to rice cooker, and the chicken was done about an hour after the rice time ended. The Keep Warm finished it. My friend who cooks sous vide a lot had a vacuum sealer already when he built the warmer. I don't have room for any more stuff in my tiny house. I'm not getting a vacuum sealer.

But then I noticed these at the grocery store. Kind of expensive for me. $8.29 for 32 oz is over $4/lb. I consider that outrageously high. I only buy meat if it's under $1.99/lb. (Therefore I don't eat a lot of meat.) But if these individually wrapped ones are on sale I'll get them because they keep so well.
My first attempt I thawed one out, put it in the rice cooker with tap water to come up to the 3 cup mark (full on my rice cooker), and turned it on to Keep Warm. 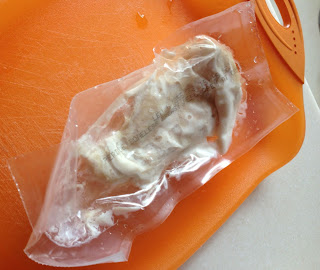 I kept checking for it to get up to 160° then I let it go an hour. It took longer than I thought it would to come up to temperature. I think I may have overcooked this one.

This is what you do with a kind of unappealing white slab of salty chicken – make a sandwich. 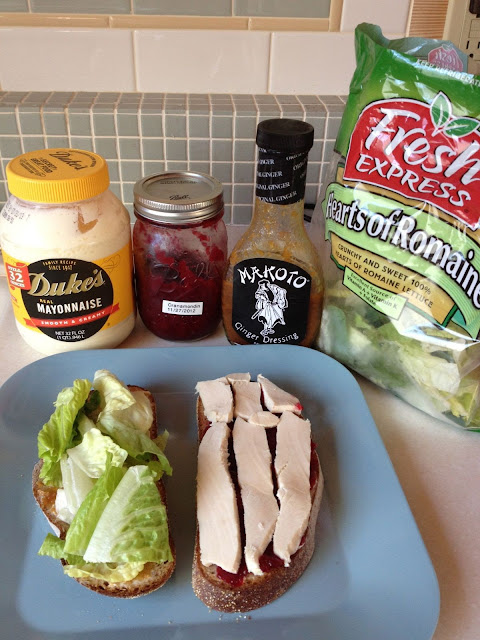 This is my favorite sandwich, whole wheat bread with mayonnaise and homemade cranberry/calamondin (cranamondin) sauce one one side, topped with sliced sous vide chicken. The other side gets mayonnaise and ginger dressing topped with romaine lettuce. Whole romaine leaves are my favorite, but I didn't have that when I made this picture sandwich. (Romaine lettuce lasts for weeks in my refrigerator. It is the friend of the hermit.) I like to stretch my food out so I only use half a chicken breast for a sandwich, then I can have another one the next day.

Later experiments yielded improvements. I have settled on this process:

Starting with hot water is the key. It's too hot, but the chicken is too cold. About the time they equalize the machine is keeping it all at 160°F. In slightly more than the 2 minutes it takes water to boil in the microwave you are done cooking and are back to doing something else.

I like the rice cooker because it's totally OK to just walk off. It's not going to burn the house down if I go work in the office. The worst that will happen is I forget to go get the chicken out and it gets dry around 2 hours. I set an alarm on my phone usually.

I've also done two frozen breasts at a time, with the boiling water to start. I think I went about an hour and a half. They were the juiciest and most succulent. I unwrapped it immediately and refrigerated it. I served a sandwich like this to a friend who remarked that it was really good. So it's not just me, I have TWO data points.