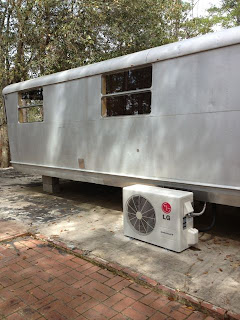 I got a new air conditioner for my Spartan project in March of 2013. It's the latest LG Mini-Split with a DC motor on the fan and compressor (I think). It delivers AC power to the inside unit. The idea of the inverter is to use the minimum amount of energy required to do the job. Instead of full blast or off, there are degrees in between determined by varying the DC voltage applied to the motor. So inside there is a big ol' power supply built on a circuit board, similar to the one for a computer, only bigger. It generates its own heat, which I guess is calculated to still be less than what is wasted by running everything full blast all the time.

My air conditioner works great for what is basically a solar oven. I thought I would put up shade sails because they would look neat and keep the sun off when the tree shade is lacking in the middle of the day. Turns out the cost of them and the trouble to take them down for every hurricane warning seemed more than just paying for extra electricity to run the new air conditioner.


Of course nothing is perfect, not here in the Deep South where nature lives to challenge engineering creativity. On July 3 my air conditioner didn't work. The inside unit just flashed C-05 on the display that usually shows the temperature. I Googled that and found that it means communications error. Standard fix is a new communications board in the outdoor unit. I went out there and put my nose up to the place where the wire goes from inside to outside. I could tell by the smell that somewhere the smoke hath poured out from within. (This expression may be unique to me. There was a computer on the floor in the lab at my old work that had a post-it note on it that said "Smoke poureth out from within," which I thought was a very classy and precise way to say it was broken.) But I digress. I called the company that installed the air conditioner to see if the warranty covered labor. Yep. They would send the technician right out. 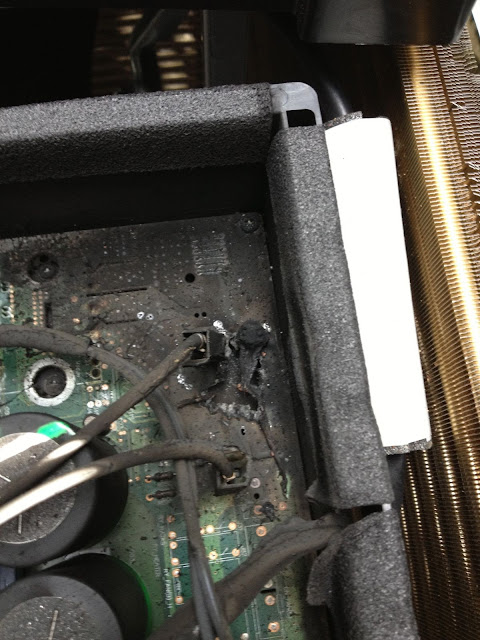 The technician quickly identified that I did indeed need a new control board. This one had catastrophically failed as a result of incinerating a tree frog. Tree frogs would seem to be pretty conductive, all clammy and capable of really good contact. Whenever I pick up a tree frog it reminds me of shaking hands with a sweaty baby. 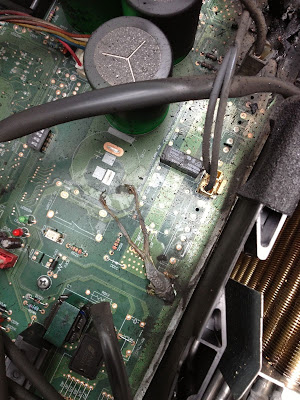 There were two dead frogs on the control board, but I think the first one caused the failure and took the other one out with him. 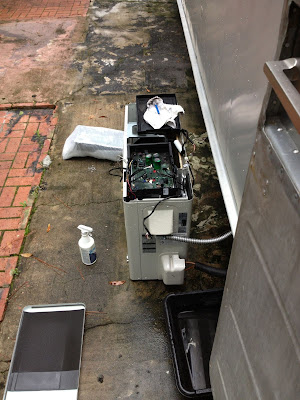 The technician came back on July 12 with a replacement printed circuit board (PCB) assembly. The man at the office said he didn't tell LG about the frogs when they ordered it, but they do have to send the burned up one back. I am not confident they will remove the dead frogs. I feel pretty bad for whoever works in receiving at the end of that trip. 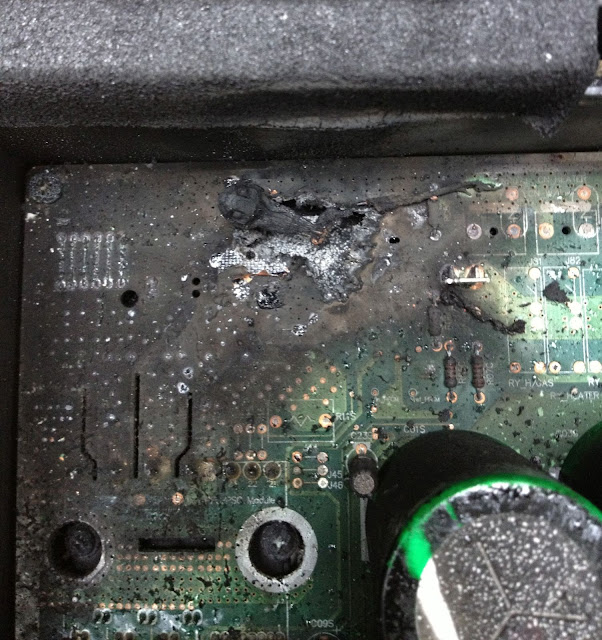 Here's a close up of the place where the frog shorted out the high voltage DC connector tab to the chassis ground trace running around the board. My friend Cheryl says PCBs start to get soft from 150 - 170°F. Chicken is done at 160°F, so extreme charring like this requires much more than that. So no wonder the circuit board is just completely gone under the frog. That's a giant aluminum heat sink underneath him. Which is why he was there. Sybarritic softie wants a place to hang out warmer than 77°F, the low here for the last few weeks.

Cheryl also told me the proper term for a hole in a circuit board from an arcing frog is "thermal event," not "smoke poureth out from within." Incidentally, PCBs are epoxy impregnated fiberglass, so that distinct smell is probably from the sooty remains of epoxy resin. 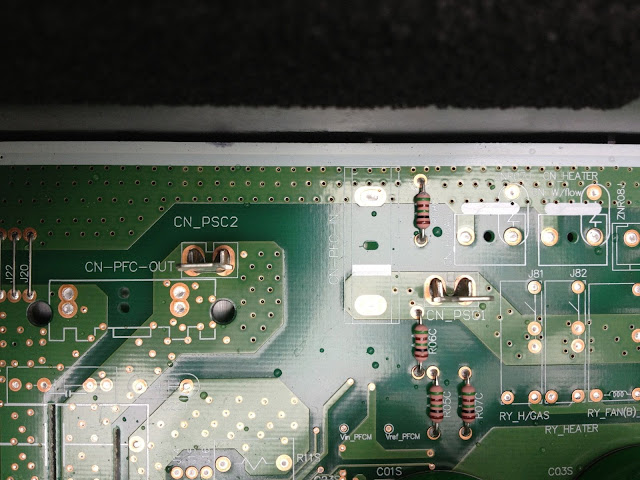 Here's the same part of the new circuit board. The part the arc obliterated is that blank board area between the tab labeled CN_PSC2 and ground, that band of copper and vias running around the outside of the board. There was no plane of copper under the frog to dissipate the heat. It just burned right up quickly. I guess the arc extinguished itself when the frog was exploded enough to open the circuit. None of the 2 fuses in the system were affected.

The technician got the replacement in place and tested it. Then he went away and I immediately turned it off for fear another frog would get in it. I wanted to make modifications that could be proven over the rest of the year, before the warranty runs out. 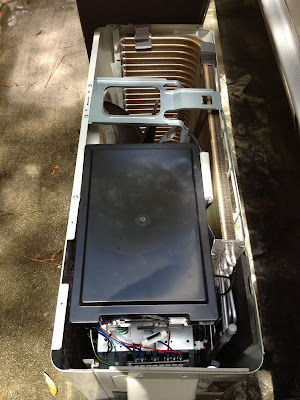 I think rather than try to keep frogs from going into the air conditioner generally I should just try to keep them out of this black plastic box. If I tried to build a cage of mosquito size screening around the whole unit, as suggested on Google+, it would need to be enormous to allow the kind of air flow required by the unit. 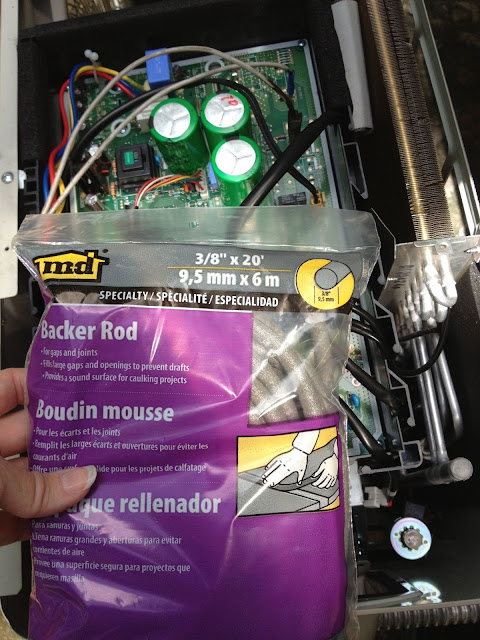 I'm going to try to block up the holes where the wires come in with this 3/8" backer rod. This is a foam that's intended to back up caulk joints. It costs about $4 for this package of way more than I need. 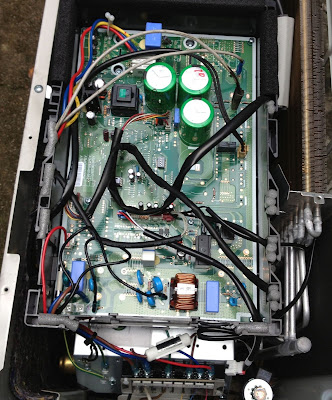 There, I fixed it. 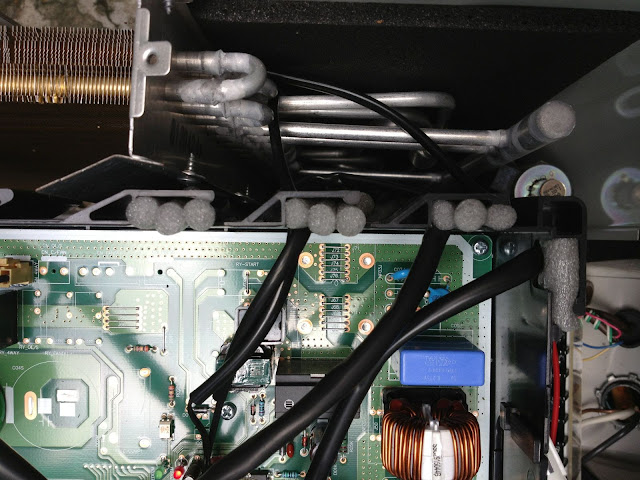 I wasn't sure if it would work best vertical or horizontal. I did some of both. I can go look at it again after a few months of use and see if any fell out. 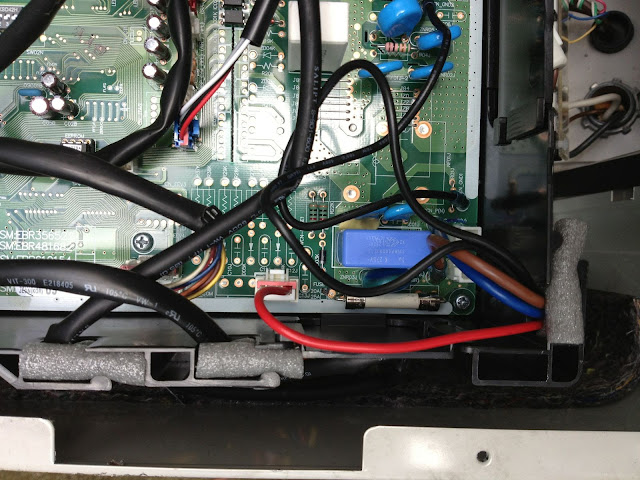 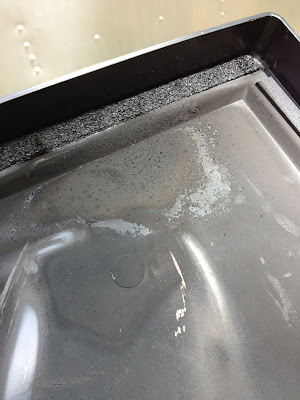 The lid is warped and sooty from the thermal event. Glad it didn't get hot enough to start it on fire. 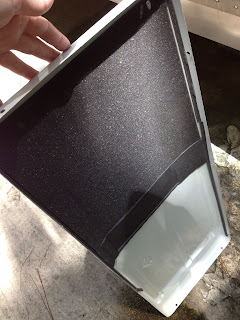 The cover for the unit has foam on the end over the control board. I hope this means no frogs can get in there and muscle their way in by bumping the top off the enclosure. The plastic lid doesn't really snap on or anything. Just sits there. The metal cover is screwed down.

I put the top back on and fired up the indoor unit and cooled down my Spartan. And dehumidified it. The floor boards were starting to swell so much they cracked when I walked around.

So that's how I frog-proofed my LG inverter air conditioner. I will update this if these countermeasures fail. What if it depended on that air flow around those wires and it overheats, even with that big aluminum heat sink underneath it? 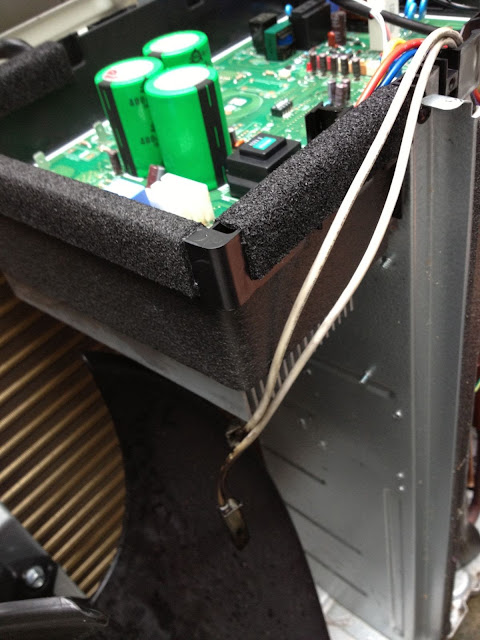 I am worried it really isn't a great design for sitting in the sun on the south side of a building where temperatures routinely top 100°F. My other LG mini-split air conditioner is underneath my house, out of the sun, and with no inverter. I've never had a single problem with it in 8 years. But this one, even with openings around the wire for air flow it has to get hot in there. Is it a good idea for the plastic lid to be pressed up against that metal top? Easy maintenance, it's true. But that's just regular closed cell foam on there, not aerogel. I bet it gets at least as hot as in my car where I've measured temps of 150°F. (I've made peanut butter cookies on the dash before.) 150°F is the temperature the circuit board material starts to get soft. I'm about to put it through a hard environmental test the next few months. I guess I'll find out soon if it's fit for long term service in the Deep South.