Hey Heisenberg, a snake was here. What kind?

One of my favorite pieces of graffiti I've ever seen was in the ladies room on the 3rd floor of the Physics building at Georgia Tech. "Heisenberg was somewhere near here. What time?"

Unlike subatomic particles, snakes are pretty easy to observe, especially when they shed their skin and leave it behind. The other day I found a snake skin next to the burrow of Stump Gopher in my front yard. 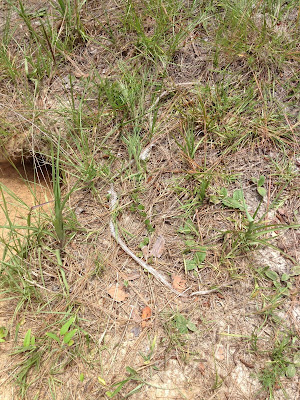 I figured it was some ordinary no-big-deal snake that shed it, but what if it was an indigo snake? That's a big-deal endangered snake that often hangs out in gopher holes. If that was an indigo snake skin that would be cool. I was in the middle of something at the time so I got a plastic storage container out of the house and got the head part of the skin and saved it for later. Eat your heart out, Heisenberg.

When I got around to it I Googled Black Racer Head Scales. The image results gave me a nice line drawing (courtesy of the Florida Museum of Natural History). I compared that to my shed scales.
That looks like a match. Just to see the difference in an indigo snake I looked that up too.
See how that third row of scales is totally different? It's a pretty easy way to tell what you've got. It's a little like picking resistor values in circuits class though, you have to have guess something that actually exists to get started.
Posted by Beachton at 8:23 PM