I know how she feels. I encountered my first pink insect in 2007, a few feet from my front door. I saw something pink on the brown pine straw from my window. I went to see what it was. You don't see a lot of pink here that's not attached to something green. Apparently I'm not the only one that distrusts random pinkness because nothing would eat it! Every day for a week I would look for it and find it. It showed up on May 27, 2007. I took its picture (This was with my trusty Olympus C3030Z. No super macro like my Casio has, but it was a really good camera until it started blowing out pixels in the CCD.) On June 2, 2007 I found another one and put them together and took their picture. Then I put them back in the sparkleberry bush where I found them. I've forgotten how long it was before I stopped seeing them. I'm sure I looked online for an explanation of some indication of rarity at the time but I don't remember what I found. I bet I put something on my old Tumblr at the time, but that archive is impossibly difficult to search. (That's one reason I abandoned it for Blogger.)

Thanks to Victoria Hillman I now have an explanation for their pinkness:


It is called erythrism an unusual and little-understood genetic mutation caused by a recessive gene similar to that which affects albino animals. This mutation results in one of two things happening or even a combination of the two; a reduce or even absence of the normal pigment and/or the excessive production of other pigments, in this case red which results in pink morphs. Although it was first discovered in 1887 in a katydid species, it is extremely rare to see these pink morphs so you can imagine our delight at finding so many in one area and they probably all have the same parents both carrying the recessive gene.

So I guess I found one of the original kind. Wonder where they were discovered? 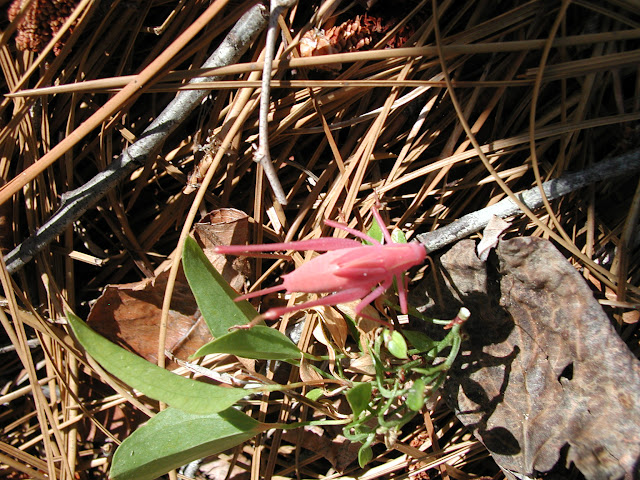 A few weeks later I saw another insect that was kind of a weird color. Not baby pink like this, but more of a coral. This one might always be this color at this stage. I don't know. It was getting dark when I found it but I took its picture anyway. Is it a cicada? What else comes out of a shell like that? It was a lot smaller than the normal cicadas.


This was right behind my house on the trail to my pond. I mow it with my Snapper lawn tractor, thus the awful looking chewed up grass blades. I think it's interesting that the eye color on this is similar to the katydids, kind of seafoam green with a black dot. I wish I had a picture of a regular one to compare.
All I can find readily is this grasshopper, which is comparable to the nymphs in the National Geographic article maybe.

*Update 6/29/2013: I saw a green katydid and a brown something similar. Here's pictures for comparison to the pink ones. 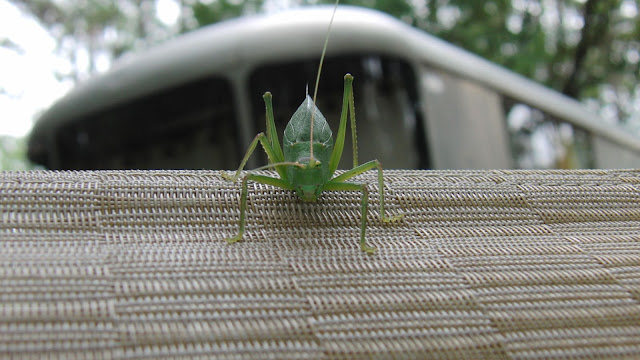 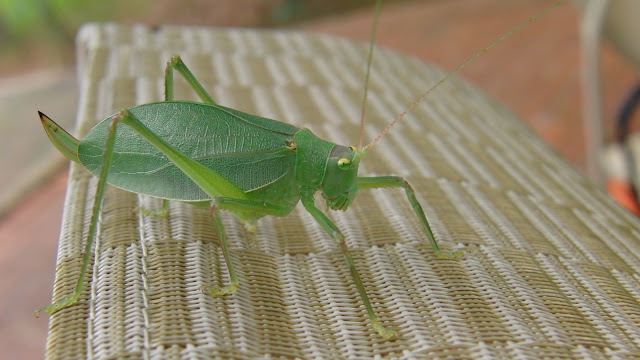