Oh neato! An earthquake just happened! I was sitting here watching my Twitter feed and the first mention of it I saw was Patton Oswalt feeling it in New York City. Then Treelobsters felt it in North Carolina, then PaulandStorm [P] in Pennsylvania, then Felicia Day commented that her timeline was full of earthquake news from NYC, then ThinkGeek reported it in Fairfax, VA, NASA_SDO reported feeling it at Goddard, then PaulandStorm [S] reported it in Rosslyn, VA. Next Patton Oswalt claimed to have caused the earthquake, which originated in his hometown, because when he was a teenager he and four friends banished Thra'axx the spider-demon to a chymic chamber and forgot to keep up the spell to hold him for eternity. He apologizes for the inconvenience. Neil DeGrasse Tyson quips that earthquakes are "clever ways Earth is telling us to get the hell off. Yet another reason for a space program." PaulandStorm [P] is speculating on how Fox and Friends will report this, "I just find it *interesting* that Obama goes on vacation, and today there's a quake. Poor leadership?" Astroengine notices that East Coasters have a much more dry sense of humor about earthquakes than West Coasters.

Well that's because there is no plate boundary anywhere near there. The Oatmeal jokes "goddamn Mid-Atlantic ridge keeps trying to grab my ass" - North America. Only I don't think that has anything to do with it. This 5.9 earthquake was less than a mile deep and poorly constrained. {Update: they changed it to say it was 3.7 miles deep} (USGS info) The little hiccup thing I remember from my Coastal Geology class in grad school is that the East coast is still rebounding from the weight of the ice from the ice age, so a sudden jump up could cause an earthquake. And also they have some large regional disturbances from withdrawing too much water from aquifers. I think it would be really neat if this was related to subsidence and rebounding combined. Those smug oil tycoons might have to admit that the acts of mankind can have a drastic effect on the physics of the planet. Urban planners might finally get some decent funding for infrastructure and research if a giant earthquake was caused by providing a seemingly endless supply of cheap, clean water to oblivious city dwellers.

I searched the USGS site for subsidence and rebound and as you might expect their site is slow to respond right now. I repeated it a few times and got some papers to look at. Most of them are about California though so it will take me a while to find the ones about the other side of North America. I could just wait a few days and one of their experts will write it up for me. I'm excited to find out what they think!

This image has not yet been reviewed by humans. The other link above has been reviewed and calls it 5.9. This is based on a 5.8 magnitude. 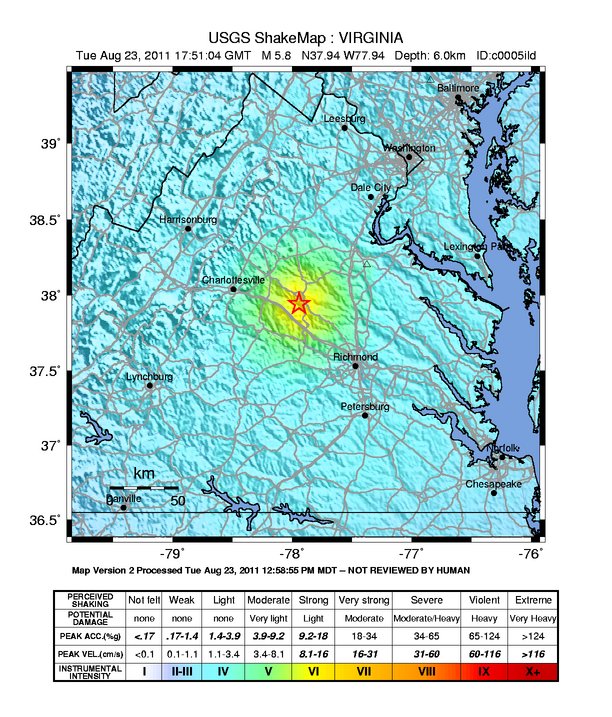 *Update, Phil Plait made an animation of sensors across the country showing the traveling waves

*Another update: USGS News released a statement. Apparently they changed the number back to 5.8 in the link I gave above. They give this explanation for why the shaking was felt so far away.


Western rock is relatively young, which means it absorbs a lot of the shaking caused by earthquakes. Thus, western earthquakes result in intense shaking close to the epicenter, but fade more quickly the farther the earthquakes travel.

In the eastern United States, on the other hand, the rock is far older, and so earthquakes can have a much larger and more widespread impact. Earthquake energy can therefore spread farther and have a greater impact.

What? That sounds... stupid. Age is not a variable I have ever seen in a physics formula of motion. Give some physical parameter, like density or friability or permeability. Say something about the Piedmont or the fall line. Mention eroded mountain ranges and sedimentary deposits. That is a weak cop-out. USGS I am disappoint.

* Update: I'm really geeking out.  This is definitely beyond the tl:dr point. I doubt even my brother wants to read this.

I found a great USGS paper about the geology and aquifers of the Piedmont. I can't see enough detail in the maps to tell where exactly today's earthquake was in relation to the what they're talking about in this paper, but it's in the vicinity. I'm not claiming in any way that this earthquake is man made, I'm just investigating if it COULD be. Or even if mining or drilling could be just one factor. Or how it might be affected by the earthquake itself.

Check out this part of the paper where they talk about fracturing. They aren't talking about it in terms of how a sudden fracturing would feel as an earthquake, but if you think about it the other way around, today's earthquake could have implications for well water. Also coal mining definitely affects this whole geologic system:

Underground mining of coal disturbs the natural ground-water flow system when the mines are active because artificial drains are constructed to dispose of unwanted water and mining activities can create new fractures and thus increase permeability. The regional water table can be lowered when the drains are effective, and ground-water flow directions can be changed in some cases until flow moves across former ground-water divides into adjoining basins. Ground water tends to flow toward mines, which are usually dewatered by pumping. Adverse effects of mine drainage on well yields are greatest where the mines are not much deeper than the bottoms of the wells and where vertical fractures connect the aquifers and the mines. Abandoned mines can collapse, which causes fracturing of the rocks that overlie the mine and might be accompanied by an appreciable depression on the land surface. These conditions are likely to enhance recharge to the ground-water system and to reduce surface runoff and evapotranspiration.

Uncased boreholes that penetrate several aquifers, which might have different heads, provide artificial interconnections, or "short circuits," between the aquifers. The water that enters the borehole from aquifers with higher heads moves up the borehole and then laterally into aquifers with lower heads so that the composite head in the well is different than that in each of the aquifers. Flow within the borehole will continue, even when the well is not being pumped, until the head in the two aquifers becomes equal. The freshwater flow system of an area can be significantly altered where numerous uncased wells exist and may result in a change in the potentiometric surface.

Although bedrock formations in the Appalachian Plateaus Province can be traced over many miles, the distribution of local aquifers within these formations depends, in most cases, on the distribution of fracture permeability. Erosion is one factor that controls the distribution of fractures. Local aquifers, in some cases, are in valleys (fig. 92). Near-vertical tensile fractures and horizontal fractures are associated with slumping that takes place along valley walls, and recharge tends to be concentrated by the fractures. Under the valley floors, the most significant fractures are parallel to bedding, or nearly horizontal. Relief of compressional stress results when the weight of the rock that overlies a valley is reduced, because part of the rock is removed by erosion. This causes the remaining rock to separate along bedding planes and also results in the formation of vertical fractures. Fractures that underlie the valley are interconnected with those along the valley walls, and the interconnected fracture set enhances the permeability of the rock. Away from the valley walls, fractures are scarce and less likely to be interconnected; accordingly, wells in these areas will tend to have lower yields than those in the valleys. Furthermore, water in the shallow fractures on hilltops tends to drain in dry seasons, and yields of some wells might accordingly decline. In general, well yields are directly proportional to the number of interconnected fractures.

Here's another quote about how oil and gas exploration have changed the natural situation.

Contamination of ground water by the improper construction or plugging of oil and gas wells is a common problem in the Appalachian Plateaus Province. The area is the cradle of the oil industry in the United States; drilling for oil began in the 1860's, and drilling for brine began even earlier. Natural brines are associated with accumulations of oil and gas and are at shallow depths in many places. Wells that penetrate aquifers that contain brine, if not properly cased and cemented, can provide conduits for the brine to enter shallower freshwater aquifers. It was once a common practice for brine produced with oil and gas to be discharged into open pits from which it seeped downward to contaminate fresh ground-water bodies. Such practices are generally prohibited now, but effects of the past remain.

Oh I found the geology map in this paper that shows the fault lines in the area of today's earthquake. I got to it from here. I'm not sure it's cool to link to their server so I copied it to mine. This is from the USGS HA 730-L Regional Summary. Man I love I can just get this right off the internet. Comparing this to the map that shows the location of the quake it looks like the point of interest is just below that little owbow feature, sort of at the tip of the dark pink that represents felsic gneiss and granite formation where it meets the green colored cretaceous sedimentary rocks. Man I really hope my brother isn't trying to read this. I bet this map is useless for a colorblind person since the text key is unreadable.

*Update 8:45: Now that there's been time for some other people to wonder about man-made effects, let's see what I've found online. Anybody blaming big oil for earthquakes yet? That would be so fun!

Donald Gilliland wrote about the connection between oil and gas exploration and earthquakes in Pittsburgh. Marcellus Shale drilling to blame for Virginia earthquake? No fracking way, industry officials say He says deep well injection has been connected to earthquakes before, and there are 70 such wells in Virginia. I don't know how many drinking wells there are. I know there are a lot of municipalities that depend on well water instead of surface water in Virginia. This paper I found only has data from 1985 where Norfolk was the biggest user of well water.

So even if the oil industry had nothing to do with CAUSING the earthquake this wastewater injected into the earth could now be connected to drinking water wells through new fractures. This kind of disaster could motivate some spending on science to determine the risk and on engineering to come up with a back up plan when municipal wells are suddenly contaminated with heavy metals from deep well injection of byproducts of the oil and gas industry. Tax them already! We need money for engineering! Science! They are GOING to screw us over. It's just a matter of time. We need to be ready.

I also like the rant in the comments hating the headline. " Are we supposed to feel giddy and naughty about mentally substituting a vulgarity in its place? Why not just use the word you wanted to so you could get fired and some more professional journalists could replace you?" I think somebody isn't up on pop culture. It's a Battlestar Galactica reference. A joke. Relax.

Here's another one from WNYC. Explainer: Did Hydrofracking Have Anything to Do With the East Coast Quake?