The Thermodynamics of Ducks and Tees

I went to the Middle Eastern deli yesterday to get some lunchtime shawarma with one of my unemployed friends. When he showed up in a black tee it made me want to do some rigorous testing of my pet peeve of people who wear black in the blazing sun on a 100°F day. Since Phoenicia is close to Horrible Freight it was impossible to not follow through. I had my friend go in and find me an IR radiation thermometer. Then I dashed in with my debit card, holding my breath, and bought it. (The air in Horrible Freight is one part air and one part volatile organic compounds from outgassing cheap Chinese wheelbarrow tires. Toxic to me.) 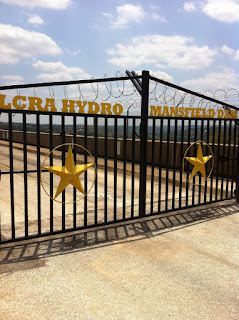 We decided to take my new toy up to the main reservoir for Austin, Lake Travis, to see how low the water is. As soon as we'd been standing in the sun for about 2 minutes I tested his shirt, 105°F and my shirt, 95°F. I KNEW IT! But when I tested our hands I was hotter than him so I decided the control was not that good since the wearer may affect the shirt. I did a more controlled test today, but wouldn't you know the sun was behind a cloud. I'll do it again tomorrow to verify my findings.

Meanwhile here are some pictures I took with my phone.

Now back to shirts. I have 4 identical knit shirts in different colors. I lined them up on a black plastic folding table and took them out in the sun. For the first time in two months there was a cloud so it wasn't blazingly bright. But since my results match my hypothesis I'm going with it :) I'll do it again tomorrow at high noon to verify.
I just happened to have a black feather so I threw that on the white shirt to see if it radiates more IR. It does. I took Thermal Physics in college but I was not that good at it. Because Applied Physics majors had the choice of Thermodynamics in the Mechanical Engineering department or Thermal Physics in the Physics department that created a loophole whereby I could take it pass/fail instead of letter grade. I was all over that! I took the one in the Physics department during the summer so I wouldn't have to walk across campus in the heat. (I know!) I still had to study like crazy to get what would have been a D. I'll never forget the final exam asked us to derive a mathematical proof to solve this question: "It's autumn and a leaf falls from a tree. Does the entropy of the universe increase or decrease?" Sigma bite me, Dr. Weisenfeld. I can't do that! I remember losing sleep over the idea of paint separating. Isn't that a decrease in entropy? He said entropy is always increasing. I went to Dr. Weisenfeld's office to ask him. He said the friction makes heat as the buoyant particles pass the other ones on their way up and vice versa for the heavy pigment falling to the bottom. That heat energy balances the decrease in entropy. Good answer!

So what's this got to do with ducks? The point is that there are experts in these things that are not me. Time to look it up. Sure enough, I found a scientist who wrote the book on feathers. Alas they don't have a PDF edition to download. Forums say I have to download the Kindle app from the App Store for it to work in Lion. I may do that and buy the book about feathers. I'm sticking with my plan to not accumulate any more paper books. Also I think I'll ask Thor Hanson if he did a comparison of the radiative heat coming off of dark colored birds versus light colored birds in the book. Did heat have anything to do with how they evolved? Is that why Great Egrets (pure white) are speculated to be Great Blue Herons that just evolved for the Everglades where there is no shade? Should we be trying to figure out how to synthesize feathers to make better outdoor gear for hot weather, not just for cold?
We may still need a Dr. Weisenfeld to explain the principles at work in this detector and the properties of the materials I want to measure. I know that a stone wall measures not as hot as a steel door. One has thermal mass, the other is a thermal conductor. The door is going to cool off a lot faster when the sun isn't shining on it anymore. So of course the non-contact IR radiometer is going to call it hotter. But a duck has low thermal mass and low conductivity. But apparently it still heats up more than something white. Does it make the duck uncomfortable? I didn't see any of them panting. I guess I need to measure the temperature on the shady side of the feather. Man, I wish I had that entire turkey wing back at my aunt's house in Beachton. That's how to do this experiment. Maybe I should appeal to one of my cousins back there to do this as their science project and tell me what they find out.
I have been working on the topic of heat and color since I was in high school myself. I made steel boxes out of flashing at my dad's shop in all the different colors of flashing metal he had -- white, seafoam, blue, goldenrod, burnt umber, and galvalume. I put them in the sun with the outdoor sensor of an indoor/outdoor thermometer inside the box. I learned then that the air inside the white metal was MUCH cooler than all the other colors. Galvanized was just as hot as burnt umber. People think it's shiny so it must be reflecting the heat. HA! You'd be wrong. That's why the roof on my house in Beachton is white and nothing but white.
So I'm sticking with my policy to never wear a black shirt before 7 pm in the summer. I wish I could get somebody to sponsor me to do some performance art where I get one of those road side speed detector signs and interface it to my IR thermometer and take the temperature of people going by in their dark colored clothing. I'd set it up at the entrance to the Austin City Limits Festival and arrange to get a kickback for every white tee shirt sold.
Posted by Beachton at 8:55 PM

Email ThisBlogThis!Share to TwitterShare to FacebookShare to Pinterest
Labels: Color and temperature, evolution of color, feathers