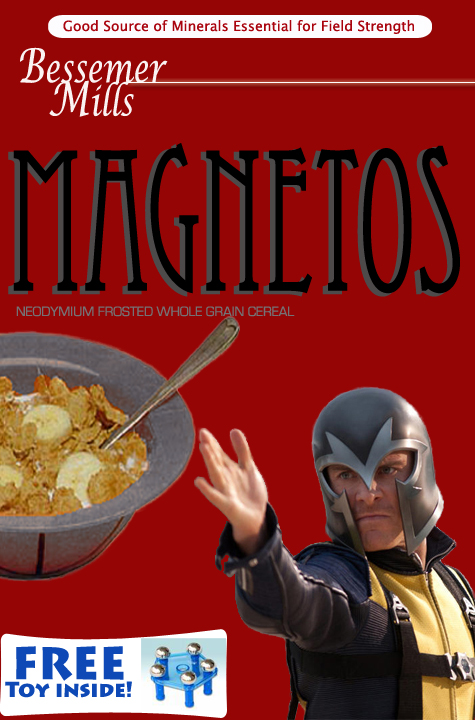 I just remembered a sick idea I had after the last X-Men movie I watched, the Last Stand. I made a mock-up cereal box with Ian McKellan on it. I modified it this morning with Michael Fassbinder. I didn't go all out with shadows and gradients like a real modern cereal box because it's just too twisted to warrant spending that much time on it. Plus I'm not a graphic artist. I have the ideas but I would get frustrated trying to actually make all those effects. I think I nailed the copy on the original though. I like the field strength part particularly.

So I didn't say anything in my my X-Men review about the character that's supposed to have power over metal. I had to do some research into the comic book world to see what his story is supposed to be. Is it straight up magnetism or some power over all metal?

Apparently he can't do anything with gold because he messes with a man's mouth and says something like "Guess you don't have gold fillings." Yeah, but the alternative to gold is not IRON fillings. That's crazy talk. Amalgam fillings are mostly silver, tin, copper, and zinc. None of that is paramagnetic. Aside from iron the only common elements that are paramagnetic are nickel and chromium. Dentistry does use stainless steel, but usually it's not paramagnetic even when it's a combination of iron and chromium and nickel that are. I had Nitinol wire and porcelain brackets the last time I had braces around 2004 so I was totally safe from magnet mouth. I could have had an MRI of my head and it would have been fine. We've come a long way from the days when a mutant with a grudge can pull your crowns out with his mind.

The other metallic object that figures highly in Magneto's story line is a Nazi coin. I've never heard of a magnetic coin. I had to research it. Maybe if it was pure nickel? There were some older Canadian coins that were pure nickel and would stick to a magnet. Modern Canadian coins have a steel core and will jam up American vending machines. (Steel parts become magnets just from sitting still in the earth's magnetic field.) I looked up Nazi coins and as expected they are mostly copper and aluminum and zinc. There is one example made in just one year that says it's nickel. You can buy one for $62.50, an order of magnitude more than all the other coins not made of nickel. Let's give him the benefit of the doubt and say that's the coin in question and that's why he could control it. But in the scene where his nemesis tries to make him move the coin and he can't, he crushes a bell instead. A BRASS bell. Now really, brass is not magnetic. They're just getting silly now.

Why couldn't a PA on the movie set just go around with a little magnet and find stuff that the magnet would stick to for this scene? How hard is that? It would have eased my mind A LOT. I just went around my house with a magnet and found out some cool stuff. If I was riding my old Schwinn and Magneto wanted to throw me in a ditch I'd be toast. But on my mountain bike there are just a few screws on there that a magnet will stick to. I would just ride away. My polyethylene kayaks are totally safe. The few screws in them are non-magnetic stainless steel.

So how does Magneto stop bullets? Most bullets are lead or copper and not iron. Or missiles and mortars which are probably made for reduced weight so are likely mostly aluminum. 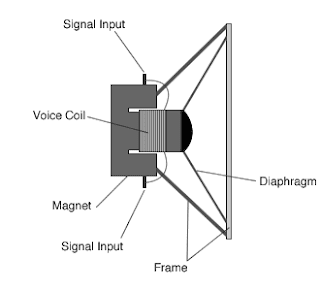 I read some supposition that his power is really ELECTROmagnetism, like he makes lightning in some of the comics. It's proposed that he can induce a current in any conductor. So even if it's not a magnetic metal he can make a current carrying loop in it and make it SUSCEPTIBLE to magnetism. He makes speaker motors out of solid objects.

The way loudspeakers work -- fine copper wire is coiled around a paper cone nestled in a gap in a solid ceramic magnet. The amplifier makes current flow through the wire. The magnetic field induced by current going in a circle like that makes the copper/paper part jump up out of the magnetic field, pushing air in front of it. That's what you hear, pressure waves in the air. The amplifier is an alternating current source, so the current is going back and forth in the wire, so it alternately pushes and sucks the air in and out as it jumps up and down in the magnetic field.

Those RFID tags race organizers use now work on this same bit of physics, only in reverse. You run or ride your bike through a magnetic field and it induces a current in a coil of wire inside the device they give you. That makes it transmit your identification number to a receiver that logs the time in a computer. Magneto could totally sabotage a triathlon if he wanted to.

So basically Magneto has to take whatever metal object he wants to control and set up a circulating current in it that he can then control with his magnet mind.  Well if I can imagine a circulating current in just one part of a solid metal conductor and then imagine a magnet around then why can't a mutant? No wonder he had to work on this power of concentration for almost 30 years before he could go after his nemesis. Still, considering the modest amount of thought it took me to get there I wonder why they never had him rocking out in the warehouse district, playing metal buildings like subwoofers? Too bad he's all hung up on his personal issues of persecution and not a performance artist.

This doesn't explain why he can't control gold though. Maybe he just chooses not to.
Posted by Beachton at 5:17 PM