I learned today that the Sarah Palin emails from when she was governor of Alaska were released Friday ON PAPER! I assumed it was just a PDF people could download from a link on alaska.gov or something! I learned this from The Daily Show. From 3:15 in the video below.

Clip of Andrea Mitchell, MSNBC: "The boxes are packed with single spaced, black ink on white paper. And the documents are in chronological order. And the boxes weigh 50 pounds."

Jon Stewart: "You know, I think the box of paper would weigh 50 pounds whether there were emails written on them or not. You know really, the 50 pound would only be news on Mars, where the gravitational force is different."

The Daily Show - Pmail
Tags: Daily Show Full Episodes,Political Humor & Satire Blog,The Daily Show on Facebook
I watched The Daily Show after I read an article this morning about an analysis of the writing quality of the email. Now I have greater respect for the effort to do this analysis because somebody had to type this stuff in or run optical character recognition on some of the paper. That's WORK.

AOL Weird News claims they hired experts to evaluate 24,000 pages of Sarah Palin's email. They used the Flesch-Kincaid readability test. You guys! This is BUILT INTO WORD! You don't have to hire consultants! Anybody can do it!

They picked small passages and graded her at 8.2, "...a solid communicator." She pretty much writes the way she talks. This is typically something I encourage in writing. The problem with Sarah Palin is not that you can't parse her sentences, it's just that what she says is plain WRONG. We understood that she thought Paul Revere rode through Boston to warn the British. She was just WRONG. Not confusing.

When I coach engineers on how to write reports I have them explain the content to me first. Usually they are eloquent and knowledgable and clear. I say "Great. Write that down." And they look confused. Don't I have to put in lots of hence and therefore and semicolons? NO! Just write like you talk! People understand that. (Plus for civil engineers usually nobody will ever read it so just do it the easiest way possible. Android phones will take dictation now. My brother can do an extra 2 hours of work a day in the truck on the way too and from the Everglades if he wants to.)

So back to the Flesch-Kinkaid readability. The author of the AOL Weird News story scored 8 for his writing.

I want to play! Let's do my Ocean Circulation Primer, where I was trying to be extra concise. 7.5 grade level? Is that good? I wrote it so a 12 or 13 year old can understand it?
You can test anything. Something online? Just open Word to a new document and copy and paste the text from the internet. Here are the menu steps to get there. This is on my Mac but I assume it's the same for Windows.
Tools: Spelling and Grammar
Selection Options at the bottom of the Spelling and Grammar window
Under the Grammar section check the Show readability statistics box

Run through ignoring spelling and grammar "mistakes" and it will show you the statistics at the end.

There's a bug in Mac Word where you can't get back to the Spelling and Grammar menu once it's already completed. It will just show you the readability statistics again. The workaround is to intentionally create an error and it will show you the options again. Make an initial caps small.

I would test more writing to be sure the test is consistent but this happened and now I don't want to play with Word anymore. 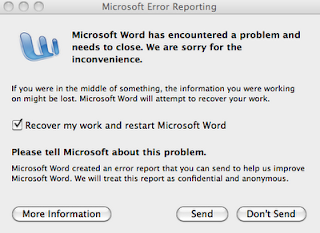 Oh, Microsoft Word! I love you so much less than iChat, where my funny funny friends live, like Steven Kuck.

S: Hey, wassup?
B: I just discovered a douchey grammar setting in Word
S: ?
B: Yeah if you choose the "technical" setting in the grammar tool it makes suggestions to make your writing douchier.
S: An example?
B: I would give you some but it crashed.
B: But one I remember was the suggestion to change "a lot" to "many"
S: As in "I left my car parked in many?"
B: HA HA! Yes!
S: Though, I guess, you know, "many" probably is a lot better most of the time....
Posted by Beachton at 3:26 PM