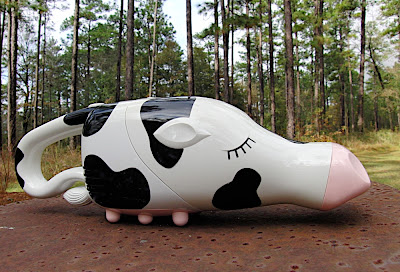 When I built my little house my friend Chris suggested I get a hand vacuum to suck spiders off the ceiling. (In my loft bed the ceiling is well within arms reach.) We happened to be at the Black and Decker outlet soon after his suggestion. When I saw this product I had to get it immediately. I thought it was hysterical! What was it supposed to be?! I asked Chris and the lady at the store and they both gave me the strangest look. "A cow of course!" 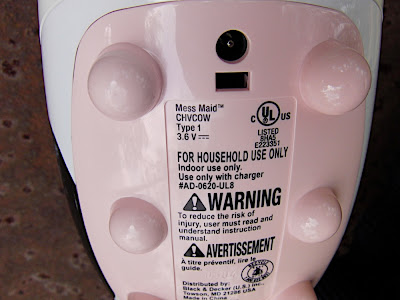 But cows only have 4 teats! They just shrugged like it didn't matter. Based on my analysis of the model number, CHVCOW, I must admit it is indeed meant to be a cow. It is mind-boggling to me that nobody on the design team at Black and Decker or the Chinese factory knew that cows only had four teats. Some big city designer created this in ProEngineer and printed out a rendering, showed it to some higher-ups in a meeting and they all said "Cute as a button! Ship it!" He put the files on the FTP site so the guy in China could download it. They make all these separate parts, two in pink plastic and some in white. They are innocuous looking separately. In my mind I see a new assembly worker with his first factory job off the farm where he grew up. He's snapping the pink nose on this thing going, "What the HELL am I making?" He asks the guy next to him and he shrugs, "It's for America." And the new guy is wondering, "Do cows in America have 6 teats? They have really taken consumerism to the next level!"

Yes, consumerism and ignorance about teats. Why isn't there some handy online reference to show how many teats different animals have? I tried to look up some good information today and it is hard to come by. My aunt wrote a story where the exterminator claimed pack rats and elephants are the only animals with two teats besides humans, but I confirmed that is indeed wrong. Elephants do have two, up by their front legs, same as manatees. But our local pack rats have four. This one reference article I found with a teat table says rats have 12. It's either wrong, or it is some other species than Neotoma floridana. Their litter size is typically 2, which clamp onto the teat and the mother mouse drags the babies around with her while she forages. That's probably why Red the Rat Man thought pack rats had two teats. The others probably become involuted when unsuckled.
Males and females of all mammal species have teats with two exceptions. Male horses and male rats don't have any nipples. Yes, boy dogs have nipples! There seems to be a lot of confusion about this on the internet! Boar hogs have teats! Yes, they are indeed useless as the euphemism goes, but there they are just the same.

Cows have four teats with one mammary gland each. Apparently they can have supernumerary teats that are removed very young for milk cows. Horses have two teats with two mammary glands each. Goats and Sheep have two teats with one mammary gland each. Cats and dogs usually have eight teats, but sometimes they can have more. Pigs are the teat prize winners with usually 12 teats and 24 mammary glands. But however many an individual animal has, they always have THE SAME NUMBER FROM BIRTH TO DEATH! I found this Q&A on a dog fanciers site where the respondents really showed no patience with a person who wondered why her dog had six teats this time she was pregnant and eight the last time. They told her to look harder. And they told her she was too ignorant to be breeding dogs. Please stop. It's kind of comforting that good dog breeders know about teats.
Apparently people just don't like to talk about teats. How old are kids when they become embarrassed by nipples? They are usually so fascinated by all the facets of animal life. Maybe the key is to teach teats in first grade before they become taboo. Maybe start off easy with the monotremes. Duck billed platypusses feed their babies by excreting milk through pores in their skin and the babies just lick it off the mama's fur. Very discrete.
Posted by Beachton at 2:20 PM