The Buck in the Bathtub

This particular buck
had some bad luck.
He went under my house
and his antlers got stuck

He snatched himself free,
which woke up me.
I started down the ladder
and out the window I could see

This long-legged figure
crossing my porch.
I got down to the floor
and then could see more

No really, in the category of "things that go bump in the night" this is a true story. It was still quite dark when my ladder shook and creaked on the beam from some impact to the house. Even in a sleepy daze I could intuit it might be a deer so I got up to look. He passed between my porch posts as I came down the ladder.

He crossed to the North side of the house where I have those big windows that go all the way to the floor and look out on the birdbathtub, seen in countless bird photos. It's a clawfoot tub on concrete blocks buried in the ground and it has a curvy longleaf pine branch across the top for the birds to perch on while they drink and bathe.

The deer poked around in the pine straw I'd recently raked up and messed around in the grass of my rain garden and I thought I could see antlers. It was really dark. He moved on to the birdbath and started to drink.

And he drank and drank and drank. For so long I got bored and sat down on the floor and had time to compose rhymes to describe what was going on. I tried to get my camera to take a picture but it was too dark.

Gradually it got lighter and I could see the outline of his antlers better and start to count the points, which I've heard is what you do. I thought there were 8. He seemed to be licking the bird perch in the bathtub now. I could see it moving. Deer eat algae? Maybe it is a bit salty from the water evaporating on it over and over.

So he's standing there facing east on the back side of my bathtub licking this piece of light'rd about 12 feet from me when this OTHER buck enters the scene. I'm looking out the window, mind, so it really looks like he just comes on stage from the wings. It's just like a play. They're all facing me properly and everything. And he is a BIG 12 point kind of buck. He just walks up fast right alongside the light'rd licker, neatly twists his neck and jabs him in the rump with his antlers! And Light'rd Licker JUMPS INTO MY BATHTUB! He kicks the light'rd out behind him and bounds out over the sloped back of the tub and they both disappear in opposite directions. What the what?!

I was NOT expecting that!

I went to look out all my other windows to see if they were still hanging around. One of them had circled around off to the West and was messing around. I tried the camera again since there was more light. He was gone by the time I got back with it.

I went out on the front porch to see what I could see. I noticed the aluminum and porcelain tile table I use for my outdoor kitchen was knocked off it's leveling feet. That must be what shook the house. I realized it was drizzling rain a bit and was never going to get a lot lighter. I came back inside to write this down. Then the under-the-house deer came back. It was still too dark to take good pictures so I took bad ones. 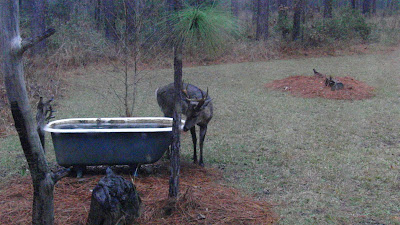 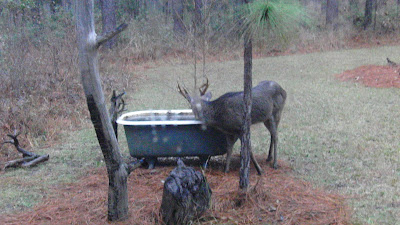 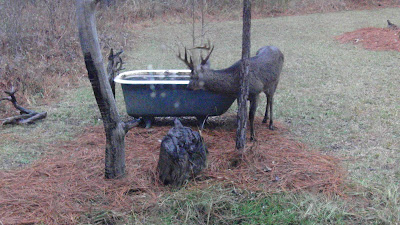 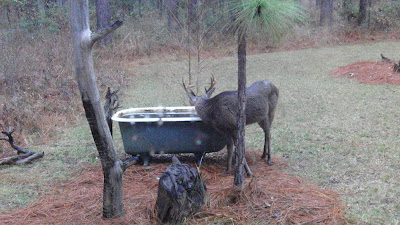 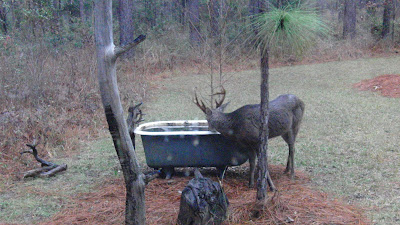 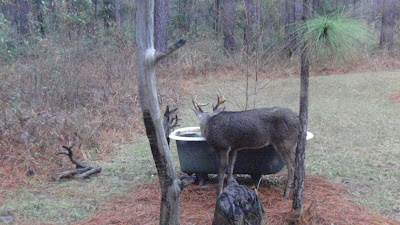 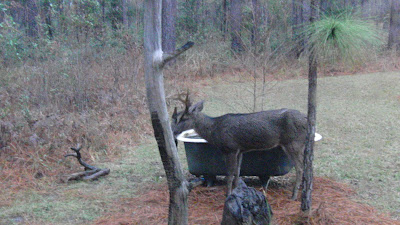 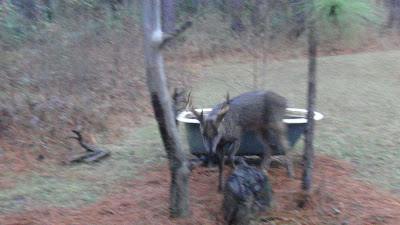 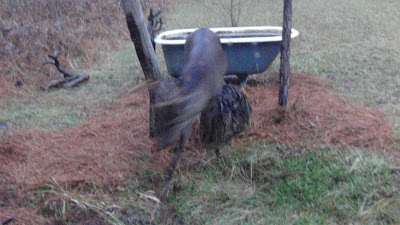 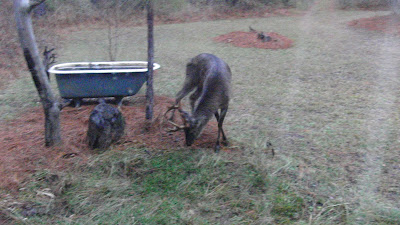 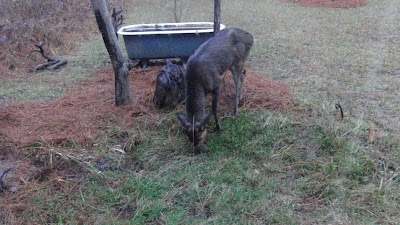 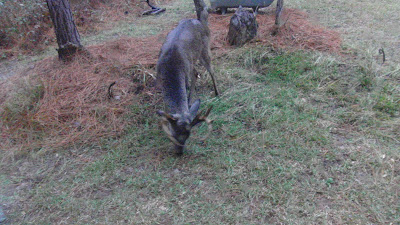 He came right up to my window but the batteries went flat on the Casio camera. I could see how wet he was. I wondered if he had any injuries. He seemed so listless and tired. Is he hurt? Or just worn out from a long night of trying to avoid getting in fights with that other buck? As he walked away to the south I could see a pink spot on his side where some fur had been gouged out. It didn't look like a bullet wound though. It was on the other side from where that asshole poked him.

After I wrote this down and it was about as light as it's going to get in this drizzle I went out with my fully charged iPhone to take the crime scene photos. I'm pretty sure if I hadn't seen this happen I could have pieced it together from evidence.


I sometimes scrub down the sides of this tub but I don't often drain it because there's fish in there. The bottom has a gravel layer like an aquarium and there are two plastic planters of pond soil that lily pads grow in. I wonder if he punched big hole in the mud in those planters. I bet it would be disconcerting thinking you're stepping into a perfectly ordinary bathtub and instead of cast iron your hoof hits gravel and pots of mud.

Anyway, we can conclude from this story that deer will break your shit just like children. No respect for personal space. Also I am not a morning poet.
Posted by Beachton at 9:00 AM