Inspired by the xkcd comic, Theo Sanderson made a text editor that alerts you if you use an obscure word choice, defined by the 1000 most common words in contemporary fiction.

I tried describing the riveting technique I learned to fix that old caravan last year. Here it is the way I would normally describe it.

Buck Riveting: Solid metal rivet is inserted in a hole drilled through two or more pieces of sheet metal. Heavy bucking bar held on one side, air hammer applied to the head of the rivet. Hammer blows deform the rivet to clinch the material together and expand inside the hole to seal against air and water intrusion. Used in airplane manufacture.

Here it is in the Up-Goer Five Text Editor:

Not empty join: Stick two things together with a not-wood stick pushed through an opening in them and hit against one side while holding the other side with a heavy bar. Things stay together now. Fly away in it! 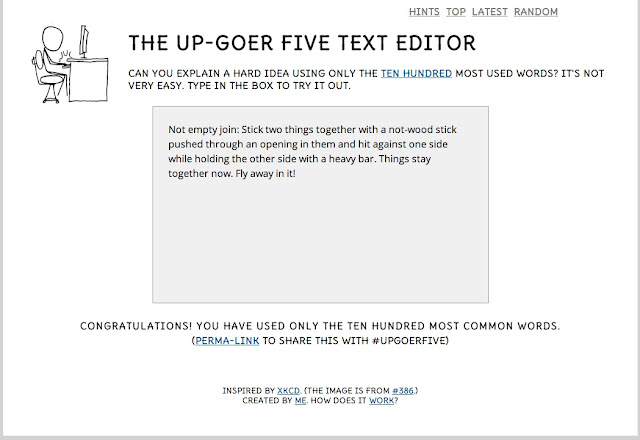 Once you get going you degrade into silliness. It's kind of amazing. Mike Brown (@plutokiller) used it to describe his life as an astronomer and explain why he can't look at the sky as much as he wants.

"Sometimes there is a really big brown animal outside the door who wants inside to eat our food." (He has a bear problem, witnessed in many pictures on his twitter feed.) And while his wife can look after the daughter and three cats by herself, sometimes she's not there or, "Sometimes the mom really really really needs a drink."

Being reduced to these 1000 words leaves sentiment and simple humor. It's adorable.


The dad (that's me) is good at helping out in all of these ways (very very good when it comes to getting the mom drinks, actually) and so everyone is happy when he is home and not flying around the world looking up into space....

Apparently when you take away all the words of science you're left with machines that are surely death traps, parenting, and alcoholism.
Posted by Beachton at 11:38 AM