Public Right-of-Way Is Not For Your Damn Signs

I have mentioned before that my little part of the world consists of my woods as far as I can see, but at the end of my driveway I come to a divided highway dotted with two gas stations, three car title pawn places, two furniture stores, a woodworking shop, a tractor repair place, a bridal boutique, and six churches. Recently one of the title pawn places got the idea that it was ok to order up a hundred lawn signs and place them at increasingly short intervals along the public right-of-way from Tallahassee all the way to their location in Georgia (Loan sharking is illegal in Florida). This infuriated me when they appeared. Signs on the side of the road?! That's illegal! Do they not know this? Why haven't the other two title pawn places sent employees out to pull up the competition's illegal signs? Do NONE of them know it's illegal? Are they right now on the Vistaprint website ordering up some for themselves?

I complained about these signs when I was riding with my laundry-room-completion helper from Jacksonville when we were coming back from Tallahassee in his pickup truck after we dropped off my car to get a new starter. The next one he saw he pulled over and I got out and picked it up. We collected all the illegal signs in Florida. But I decided to leave the ones in Georgia to see if they would get fined. My little county could use the revenue.

Well today to my delight I saw a service vehicle picking up signs from the right-of-way.

I was curious if they were going to stop at the place of business and bless them out for putting all those signs in the right-of-way. So I turned around and came back and waited.


They totally went there! I totally shot a video of them turning around, too, but Google keeps changing it from a video into a photo if I try to post a link. Anyway, it's not important. What's important is that I was very excited by the truck turning around to go back to the business in question.

The driver went inside and the passenger got all the signs out. I hope they fined them and made them dispose of the signs themselves. 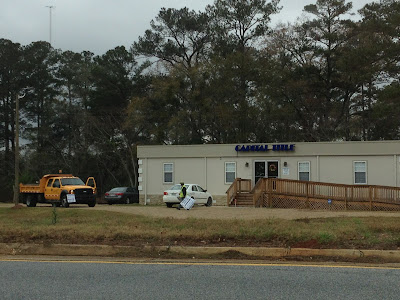 I couldn't believe those things were there for three weeks or more before they got in trouble though. This is the kind of philosophically unjustifiable crime I just can't abide. How do they think the right-of-way is theirs for free advertising? Did they not wonder why all the other two title pawn places or the furniture store or the bridal shop didn't buy 100 signs and do the same thing? Did they think they were alone at the pinnacle of marketing acumen?

What's that philosophy test that says something is unethical if it becomes impossible if everybody does it? This is clearly a case where that is easily applied. If it was ok to put your sign in the public right-of-way there would be no room left for anybody to stick a sign in the public right-of-way. I have just a whisper of a memory of this concept from philosophy class in college.

That morality test memory has the faint whiff of Kant, so I looked it up on Wikipedia. I skimmed it quickly and see I'm thinking of the First Formulation of Universal Law, but it is long and complicated. I like this term "categorical imperative" better.

I think I'm safe to go ahead and say that it is an utter and complete waste of my emotional energy to get upset because of the immoral advertising strategy of people that loan money at over 300% annual interest. I don't think categorical imperative or universal laws of nature enters into their fraudulent business plan, anywhere. I bet they even type that thing with two spaces after a period.

Still there it is. My moral outrage. Vented. And justice rendered, maybe, I hope, by the men in the nice yellow truck and reflective vests. It's up to men in different outfits to make pawning your car illegal. I wish they would get on that.
Posted by Beachton at 5:25 PM