Paul Broun: That's why I'm a hermit in Georgia

I woke up this morning to a Twitter message from my friend in Northern Wales, @RojSmith: @beachton Evolution, embryology and the Big Bang theory are "lies straight from the pit of hell" po.st/hB7oo6

I clicked that link:


ATHENS, Ga. (AP) — Georgia Rep. Paul Broun said in videotaped remarks that evolution, embryology and the Big Bang theory are "lies straight from the pit of hell" meant to convince people that they do not need a savior.

The Republican lawmaker made those comments during a speech Sept. 27 at a sportsman's banquet at Liberty Baptist Church in Hartwell. Broun, a medical doctor, is running for re-election in November unopposed by Democrats.

Well isn't that special. I read it as a state representative, which means he can't do much harm. Then I googled him to see if he went to UGA, as you do, and realized he's a US congressman. How embarrassing. (And yes, he did go to the university in Athens. They are a big football rival of my alma mater, Georgia Tech, and we mock them relentlessly for lacking academic rigor. "Be sure to roll your windows up when you drive through Athens or they might try to throw a diploma in your car." "What does a UGA grad call a Tech grad? Boss." "How 'bout them dawgs?! Piss on 'em." "At the football game the UGA fans kept throwing firecrackers in the Tech student section. But we didn't care. We just lit them and threw them back.")

My twitter feed revealed that this is indeed an international story with this link from Guardian Science, with the video of him talking nonsense. gu.com/p/3bvyn/tf

Whoo doggy! Lookit the deer heads! Lookit them looking at Paul Broun! I love how they arranged them to all look to the center. I bet the person that hung those up worked on the yearbook staff in high school. I couldn't watch this whole thing. I stopped after the "pit of hell" quote. 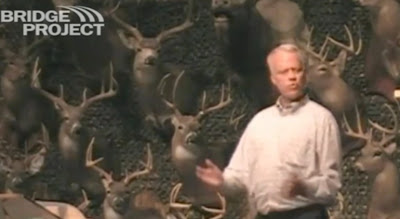 Welcome to rural Georgia. Just so you know, this clown's district is on the other side of the state from me, so even if somebody was running against him I couldn't vote for them. But it's not any better where I live. And as much as I'd like to blame UGA, those are really just jokes. My creationist relative-by-marriage went to Georgia Tech. Religion can even corrupt smart people with good educations. I cannot understand how they believe the earth is only a few thousand years old, I can't argue with them, I don't even want to know they exist.

This is why I can only live here if I maintain complete isolation from society. I am a highly sensitive person. I only maintain my happy disposition by delusion. And I maintain my health by trying hard to avoid migraine triggers. Emotional rage triggers migraines. I knew better than to watch the presidential debate. I've been having trouble with my eyes lately so I haven't worked on the computer much. I just got some new glasses Friday so I thought I could brave a post today. But it's so bright in my house I got aura already. I'm working very hard to finish the Spartan for my lab/laundry which should be a lot darker than my house and better for computer work. (I went to the eye doctor and tested 20:15 uncorrected. I can see better than most people my age. I have a tiny bit of astigmatism and only need 1.00 reading glasses. But I'm just so sensitive what's trivial seems monumental to me.) 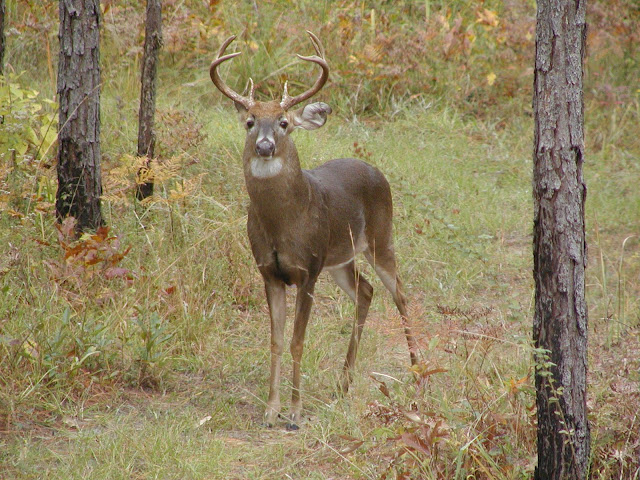 In honor of all the deer skins stretched over fiberglass forms in that video here's a picture of a real live Georgia deer with antlers. (Taken out of my bathroom window some years ago.) I don't ever shoot these because they are way to big for me to clean and eat by myself. And I'm not a big fan of taxidermy. I prefer photography. Also prefer staying in bed until the sun comes up. And chicken.