Not Qualified to Rate the Internet

I have reached a new low. Last August I applied for a job as an internet rater for Lionbridge. It sounded like a good gig for me. Stay home, look at the internet all day, form opinions, get paid! It's what I was doing already, only for money!

I got an email a few weeks ago saying they had openings. There was an Excel spreadsheet attached asking how many friends I had on different social networking sites. I returned that and got an email with non-disclosure agreements and explanation that the job is for 10 hours a week at $13.50/hr as a 1099 contractor. I'd have to pay self-employment tax on all of it. It was a terrible contract. I never would have signed it back in the '90s when I made almost 5 times that much as a 1099 contractor. Required to use Firefox. Gross. But whatever, times have changed, so I agreed to it and sent it back. Next step is a 5 day, two part test. They send you a 160 page set of Guidelines to study and use to take the test. Most people take 8 to 10 hours to take this test. I read the questions on the first part, read the guidelines, studied it closely. Took my iPad to bed with the PDF of the Guidelines on it and read the whole thing through. Next day went through the questions again and turned in my answers. I passed. I got to go to the next part.

I kind of consistently flunked the sample test every time I took it. But they showed the right answers and I tried to get my head around their logic. I watched some training videos with a man leading a webinar. I started to realize that all of this was designed by and for a very low common denominator. They use Wikipedia as the last word in all research. He said stuff that was just wrong, like, "Dali, the famous architect, has a museum in Florida that would be internationally vital." What? Dali wasn't an architect, not ever, not even. He was an artist. He didn't DESIGN the museum. It's just where some rich woman bought a lot of his work and hung it on the wall in the same place. I realized that I was up against the same old rocket scientist problem.

Even my step-sister in South Carolina sent me the Huffington Post article that is being relinked all over the place saying there are 5,057 janitors with PhDs. I'd like to know the SUBJECT of their PhD. They give PhDs in some pretty useless shit. Janitoring is pretty good work for an intellectual, though. I used to be the janitor when I shared a common lobby, bathrooms and kitchen space with a mechanical engineering firm. Since I was the only woman I decided it was easier to have it be my job to wipe their piss off the floor instead of just moaning about it every day. I got a break on my rent to clean the office once a week, plus whenever the filth bothered me. It was fine because I could use the cleaners that don't have chemicals I don't like. I'm good at cleaning. I notice dirt and want it gone. But I couldn't be a normal janitor that has to use terrible toxic cleaners.

What's a bad job for an intellectual is one where the people in charge are less competent than you and your job is to tell them they're wrong. I'm not thinking of just myself here, but one of my friends with a PhD in usability research who has been let go from some of the same companies I have. He even got an "insubordination" reason on one termination the day after he told the CEO of an internet startup, "You know what? Barbara was right." It's the Intellectual Dilemma, as illustrated below. 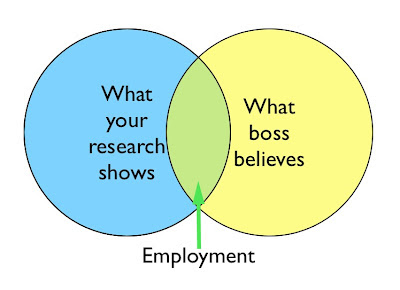 I kind of like the original article better than the HuffPo one. It has a table of how many people in different jobs have college degrees. I think I am better suited to be a carpenter (7% have degrees) than a customer service rep (22% have degrees). I've lost a job as a customer service rep. But I'm living in a house I carpentered. I think that says something. Kind of says the same thing I said two blogs ago, it's not HAVING a degree that matters as much as WHAT degree and from WHERE. And how well can you compromise your standards to keep your job?