I found a baby deer in a stump hole. I was messing around in my yard this morning, cussing Tropical Depression Beryl for not raining enough to even wet the ground under the pinecones I was picking up, cussing the deer for eating the Baptisia alba I'm trying to grow next to a stump by the birdbathtub. Over the sound of my own muttering I heard a non-bird noise among the morning chirping, tweeting, and cooing. "Blehhhhh!" I can only recognize a few of those birds, the quail and the doves and the blue jays, but I know an unhappy baby deer when I hear one. I walked down my path behind the house and heard him one more time to my right. It was pretty thick woods that way so I went inside and put on my briar britches and boots and got my camera and phone.

I can't believe I found the stump hole with the deer in it. He didn't make another sound after I started actually looking for him. I just happened along from the right direction and spied the white insides of his ears.

That hole was deep. I wasn't sure what to do. I don't like to mess with animals. Who am I to disrupt the survival of the fittest? But I didn't think his mama really meant for him to be in there. It might be ok to just help him out. I needed a second opinion. So I took his picture with my iPhone and texted it to my mother. I was so close to my house I was still on WiFi. Then I got my mother on the phone. She looked at the picture and thought that deer was real cute and she wanted to come look at him. I said he wasn't going anywhere, come on over. I marked his location with my GPS Logger app and went back to the house to get a long sleeved shirt in case I had to lie down on the ground and reach down in that hole.

Mama showed up real fast. We went out there with our iPhone cameras and assessed the situation. "You need to get him out. His mama can't help him out of there," said my mama.

So I reached down in that hole that was as deep as my arms are long and lifted Prudence right out of there. He was very light. I've made loaves of bread that weighed more than that. I put him down on the ground but he got right up and scampered a few feet and settled down under the ferns and chinquapins.

Mama and I finished taking his picture and walked back to the house, trusting his mama would come feed him before too long. It was the time of day when deer lie in the shade, chew their cuds and wait for dusk. He didn't cry. He just happily waited. I went about my business of going to the farmer's market for a 29 lb box of peaches.

Around 5:00 my aunt came over to get some garden hoses. Mama'd shown her the pictures on her phone. My aunt was sorry she missed seeing the deer so I showed her the stump hole. She allowed as it was a lot deeper than it looked in pictures. There was no sign of the fawn though. He'd probably gone off with his mama like they do.

Stump holes like this occur when fire burns the roots of a tree right out from under the stump. This tree had been cut down 10 to 50 years ago. One or many of our prescribed fires got the roots burning and they just burned right out from under the heart of the stump. The resinous heart of longleaf won't rot, bugs won't eat it, and if it catches fire it puts itself out with it's own coals, but the sapwood of the roots can fully combust. (Indian dugout canoes made of longleaf pine logs took advantage of this. They filled a log with coals and let it burn until it went out. They scraped away the carbonized wood and burned it some more. Repeat.) Sometimes stump holes have tiny obscure openings above ground, making them the favorite overwintering spot for Eastern Diamondback Rattlenakes. It's not true that they spend the winter in gopher holes. Sometimes they go in there, but according to the man that radio tagged a whole bunch of them and found where they were in the winter they like stump holes the best.

I set my flash to ON and stuck my phone down in the deer-free hole and took a picture. I thought it was kind of a nice hole.

Dry, with a sandy bottom. Small, north-facing entrance. Like something from a feature in Fox Den Monthly. When I pulled up the phone picture on my oversized computer screen I noticed something that looks distinctly like a bone in there. Turkey leg? I think some carnivores have enjoyed that den. Poor deer probably didn't find it comforting to lie there on the remains of another prey animal. 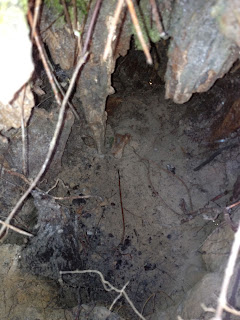 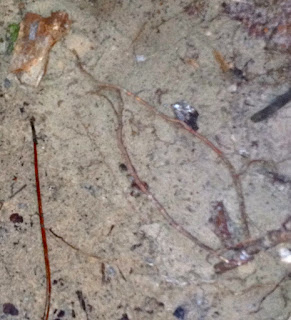 I wonder if Deer Prudence's mama ate the wild indigo? It's supposed to be poisonous to livestock in large quantities. (FDA confirms, other plant websites, and whacko herbalist sites.) Maybe that's why she left her fawn for too long. She had "ocular effects" and couldn't find her way back. If she did I guess it wore off. Maybe she'll stop eating my ornamental native shrubbery now.